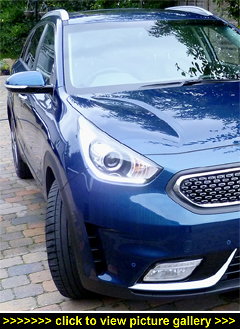 “Time was you had a straight choice:
petrol or diesel. Now there’s a long
list of power units from full-blown
plug-in electric to petrol-electric and
diesel-electric hybrids...”

THIS IS ALL DOWN not to the relentless march of advanced engineering but to the drive for ever-lower emissions. The good news is that until the time when all cars are zero-emitters there will be financial incentives for drivers to 'sign up for a cleaner planet' in the form of low/no road tax, London Congestion Charge exemption, and Government subsidies that can lop a worthwhile chunk off of the purchase price.

So where does that leave Kia's right-on, all-new Niro hybrid, powered as it is by a petrol-electric drivetrain? Slotted neatly into Kia's green-car line-up alongside the fun-to-drive all-electric Soul EV, is where. And with a full set of five doors and smart SUV cues, it's very much the avant-garde crossover, albeit one with front-wheel drive. But where it differs from the herd is that it's been designed from the off to be a hybrid.

Still instantly recognisable as a Kia courtesy of its trademark 'tiger-nose' grille, the Niro's high-set headlights and sculptured bonnet front a sharply-raked screen and cleanly-styled flanks that taper off above black-edged wheelarches. A subtle roof spoiler, neat roof rails and a shark-fin antenna cap the chrome-embellished glasshouse — guessing the Niro's visual DNA owes much to Kia's California design studio is a no-brainer.

All of which makes the Niro a smart looker, one that's priced from a tempting Ł21K to just under Ł27K. Within that spread buyers get to choose between four well-dressed trim levels, all of which come with a 1.6-litre direct injection four-cylinder petrol engine under the bonnet, one that works in tandem with a 43bhp electric motor to generate a combined 139bhp allied to a healthy 195lb ft of torque.

When we say 'works in tandem' with the electric motor we mean exactly that: for most of the time the electric motor supplements the petrol engine rather than fully taking over from it. That said, it can operate in all-electric mode for short distances: from pull-away, on a light throttle, when running downhill, or braking.

Not that you'd notice because the petrol engine and electric motor tag-team harmoniously as they switch dominance. So who tops up the motor's lithium-ion polymer battery? That's not something you need worry about because it looks after itself thanks to the 'power harvesting' that occurs every time you brake or decelerate and which charges up the battery pack located under the back seats.

Another big plus: while for most of the time there's a petrol-electric 'duet' performing under the bonnet, it's good to report that the hybrid Niro is generally 'seen and not heard'. Adding to the smooth progress are the seamless gearchanges served up by the autobox. And just to be clear: the drive from the two parallel power sources is to the front wheels only via a six-speed, dual-clutch automatic gearbox that also offers a manual mode to allow for sportier driving.

If you still think that 'eco' equates to second-tier performance, now's your chance to think again because the Niro will top the 'ton' to reach a usable 101mph and nip from standstill to the benchmark 60mph in a keen 11.1 seconds.

While we're talking figures, those for economy also deserve a mention: officially the Niro's Combined Cycle figure is 64.2mpg; a week's driving on MotorBar's punishing test schedule resulted in a commendable 56.2mpg. As good as that is, a Niro has just set a Guinness World Record for the lowest fuel consumption for a hybrid car after driving 3,715 miles coast-to-coast across the USA at 76.6mpg.

The other important figure is, of course, the CO2 emissions — for the comprehensively- equipped Niro First Edition with its 18-inch wheels, that's a satisfactorily 'green' 101g/km which means nothing to pay for the First Year's road tax and then a measly Ł20 annually for Year Two onwards. For the record, models with 16-inch wheels have CO2 emissions of 88g/km (and an official 74.3mpg figure) so never pay a penny in road tax.

The Niro's crossover-estate style body is good news for 'five+luggage'. With an accommodating 2.7-metre wheelbase, you'll find it pleasantly spacious inside; the stone grey leather-upholstered front seats are wide, supportive and ventilated and have three-stage heating and power lumbar adjustment; the driver is further cosseted with 10-way electric adjustment and two seat memory settings.

While externally it's no monster SUV, the Niro's well-proportioned body houses plenty of room: in the front, despite the slightly raised crossover-style seating position, there's a fist of headroom and good personal space around each seat — enough for the front passenger to stretch out fully without cramping the legroom of the person sitting behind them; a large central front armrest is of shareable proportions and, most important of all, the driving position is first-rate, offering a clear view down the bonnet complemented by decent rearward vision as well as effective door mirrors.

More good news — the doors open a full ninety degrees so getting in/out is a breeze, and the chromed door handles with blue LED night-time lighting work smoothly. Use any door and the first impression is of a fresh-looking, premium-grade cabin with a blend of finishes and quality materials that make it both visually and tactilely interesting. The detailing is thorough, with tastefully done chrome filleting, quality switchgear, and other elegant touches such as white hi-gloss inserts in the doors, around the gear selector, delineating the fascia, and on the steering wheel.

Along with a grippy, satin-black leather rim, the sporty three-spoke wheel is fully multifunctional with logical and easily remembered remote controls for just about everything — your hands will rarely need to leave the wheel. Better still, during the winter months the heated rim makes it even nicer to use.

With its high-gloss black surround and crisp graphics, the large (eight-inch) central touchscreen is another visual highlight; menu hopping is quick, and navigation clear-cut with well-timed spoken directions and supporting graphic prompts shown on the 4.2-inch TFT driver's info screen between the main dials directly in front of the driver. The screen also provides the view from the rear-looking camera when reversing, bolstered audibly by front and rear parking sensors.

The Niro's interior 'climate' is ably managed by the dual-zone automatic AirCon while for extra efficiency there are driver-only settings. Today's road cars really don't have any justifiable need for a rev-counter — so full marks to Kia for substituting a more useful 'power usage meter' showing Charge, Eco and Power modes flanked to its right by a driver's info display and a traditional speedo, although there's also a perfectly fine digital speed readout.

Connectivity is also well served in the Niro thanks to Android Auto (Google's version of Apple CarPlay) that, like CarPlay, transfers a number of smartphone-based apps (Google Play music, Google Maps navigation, hands-free calls and texts, and voice recognition) to the 8-inch touchscreen.

Additionally you get a DAB radio plus an eight-speaker, 320-watt JBL Premium sound system, Bluetooth for hands-free phone calls and music streaming and sufficient Aux and USB ports. Your smartphone isn't forgotten either — there's a tray where you can charge it wirelessly. In fact the Niro's cabin is a great place to recharge your own batteries, not just those in your mobile!

Maximising convenience for the driver is the powered seat's 'easy access' feature with three settings: off, normal, and extended. You may not be expecting the push-down, foot-operated parking brake but it's actually very easy to get on with. Attention to detail is thorough: for instance, the drop-down glasses holder and glovebox are both damped; and the satin chrome-and-soft leather selector lever knob is beautifully finished.

Every Niro comes well equipped but the range-topping First Edition trim gets you the lot, some of which has already been mentioned, but other items include a tilt-and-slide glass sunroof with power blackout sunblind, keyless entry and locking plus keyless start with an engine Start/Stop button, electric windows (one-shot up/down operation at the front), electrically adjustable, heated and folding door mirrors (on demand and automatically on locking and leaving), LED daytime running lights and LED tail lights, heated outer rear seats, drive-away automatic door locking, Solar glass with privacy glass on the rear windows and tailgate, rain-sensing wipers, auto lights, and an auto-dimming rearview mirror.

Active safety kit includes Electronic Stability Control and Vehicle Stability Management, tyre pressure monitoring, Lane Keeping Assist System (select from standard or active modes), Hill-start Assist Control, Speed Limiter, Blind Spot Detection, Rear Cross Traffic Alert (prevents the driver from reversing out of a driveway or parking space when there is a vehicle approaching from the side), Smart Cruise Control (with three response settings: fast, slow, or normal), a full set of airbags including one for the driver's knee, and a five-star EuroNCAP crash-test rating.

It additionally has Autonomous Emergency Braking with pedestrian detection that brings the car to a halt if the driver fails to react to a potential accident. The system covers three categories: City, which can avoid low-speed urban accidents at up to 13mph; Inter-Urban, which operates between 31mph and 50mph; and Pedestrian, which detects pedestrians and other vulnerable road users such as cyclists at up to 44mph.

Although a compact 4.3 metres in length, the Niro has a 2.7-metre wheelbase which is particularly welcome news if you're travelling in the rear cabin — for a start the accommodating outer rear seats are heated (two-stage) and come with generous outer armrests as well as a wide well-padded centre one with a pair of cupholders. Plus, wherever you sit, be it nearside, offside or in the middle (there's good room for three side-by-side) you'll enjoy a relaxing backrest angle. There's also decent headroom, dedicated air vents, and thanks to large side windows the cabin feels airy; all of which make it a limo-like place to doze in comfort.

Walk round to the back and you'll find a full-depth tailgate that's neatly capped by a high-level spoiler. The tailgate lifts up easily to reveal an accommodating 427-litre boot (which includes a handy eight-compartment under-tray) that's easily loaded thanks to a low lip. Fold the 60:40-split back seats flat and you get a seamless loadbay floor that will handle 1,425 litres of cargo. A hassle-free roller blind makes keeping your luggage private a breeze.

The Niro rides well and although the First Edition's 225/45 eighteen-inchers introduce a tad more firmness than found on the standard 16-inch wheels, it's still an agreeable ride. And when it comes to handling, the firm-ish independent suspension allied to minimal body lean add up to unexpectedly (for a crossover) crisp handling.

To its credit the Niro always feels eager to please, helped by quick-to-respond electromechanical power-assisted steering that 'keeps up' dynamically during hard cornering. Overall it's good to drive and with standard-fit stability and traction control systems you can press on with confidence.

Prospective customers will also be pleased to hear that if feels quicker than it's on-paper figures would have you believe — put a stopwatch to it and you might see a second to the better for its 0-60mph time. Particularly if you make use of the Sport driving mode — easily engaged by simply flicking the selector lever sideways to the right when in Drive. Those wanting more control and stronger in-gear acceleration can select, move sequentially through, and hold gears manually using the lever.

Big on interior space and big on kit but low on CO2 and road tax, the versatile and affordable petrol-electric hybrid Niro makes a worthy alternative to oil-burning crossovers. And in keeping with every Kia, it comes with a unique-in-the-UK seven-year/100,000-mile warranty — the best on any hybrid available in Britain. Live with one for just a few days and you'll be thinking: Yes, I'll take one! ~ MotorBar