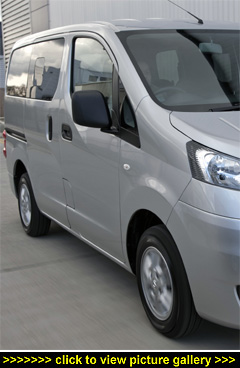 “Envy is probably the last emotion
you’ll feel if your mate says he owns
a Nissan NV. Let’s be honest here —
Nissan’s NV200 van-turned-MPV is
the equivalent of a cardboard box:
functional, plain and with all the
design flair of something created
entirely by Etch-a-Sketch...”

THIS IS UTILITY MOTORING AT ITS FINEST, and I don't mean that in a disparaging way. While car manufacturers fall over themselves to conjure up the latest piece of ultra-sophisticated technology, this seven-seater Nissan MPV harks back to a simpler age.

Here's a list of things the NV200 SE doesn't have: opening rear windows, any airbags other than the two up front; stability control, cruise control, SatNav, USB sockets, sunroof, and anything 'clever' in the rear (there are just seats; nothing else). And there's only one optional extra: metallic paint.

Following the pattern, there's just one diesel engine on offer. With 1,461cc and only 89bhp pulling a car that weighs 1,325kg, you might think that the NV200 would be overwhelmed.

It's a great credit to Nissan that it is, in fact, very much not overwhelmed. Thank the chunky turbocharger for that: it whistles away to deliver a healthy slug of torque at revs as low as 1,200rpm, so you never feel flat. Occasionally you have to change down gear to maintain progress but I was genuinely surprised at how eager it feels.

The five-speed manual gearbox isn't the last word in sophistication (much like every other aspect of the NV200, in fact) but it works fine and the lever is decently placed. There's a very upright, van-like feel to the driving position (not too surprising given the NV is basically a van), so long journeys can be a bit taxing, especially as the seats are quite hard. As, too, is every plastic surface inside the cabin.

Nor is this a cumbersome beast. It measures a mere 4,400mm long — that's shorter than a Nissan Qashqai — and only 1,695mm wide, so placing it on the road is a doddle.

I can't remember the last time I drove a car with wheels as small as 14 inches in diameter. So many modern cars are now fitted with wheels up to and beyond 20 inches that, next to them, driving a 14-incher is a bit of revelation. While the tall 70-profile tyres make for a wallowy handling experience, they do wonders for the ride quality. Oh the sacrifices modern drivers make in search of tasty-looking wheels...

The NV200 is all about carrying capacity, of course. And in this department, it may well finally be the envy of your mates. Even with all seven seats in place, there's still a very decent amount of space.

Fold (or remove) the rearmost seats and you have enough room for a full-on camping trip for five. Remove all five rear seats (fairly easy to do) and you can have a mini-festival in the back.

The official average fuel consumption is 53.3mpg. Unlike so many claims, this figure is actually achievable: while I averaged 45mpg on a long motorway run, I got an indicated 55mpg on a gentler cross-country trip. That's better than almost any other seven-seater, and way better than, say, the 49mpg average I've just got in the new Toyota Prius+ hybrid seven-seater.

In short, the NV200 does what it says on the tin. A plain tin it may be, but if you need to transport seven people with any sort of regularity, this is just about the cheapest way to do it, with prices starting at under Ł19,000. Try buying a Ford S-Max for anything like that. — Chris Rees