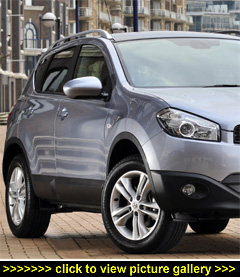 “Generally credited with starting
the ‘crossover’ sector, the British-
built Qashqai is currently Nissan
Europe’s fastest-ever selling model
— and they’ve just made it even
more tax-efficient...”

THE SECRET OF ITS SUCCESS is that it 'crosses-over' the ever-blurring perimeters for SUVs, MPV people carriers and medium-sized family hatchbacks while at the same time offering buyers a wide range of model options with both two- and four-wheel drive allied to five- and seven-seater layouts.

With the latest introduction of a smaller capacity but more fuel efficient 1.6-litre diesel engine, the power unit options now include two petrol and three diesel units; many with either manual or automatic transmissions, as well as 2WD or 4WD.

The majority of UK Qashqai buyers opt for 2WD, diesel power and five seats — so the new pick of the bunch, as reviewed here, is the 1.6 dci N-Tec+ Stop-Start 2WD model costing Ł23,045 (4WD adds Ł1,550). Both versions have a six-speed manual 'box and, as yet, there's no auto option.

The 2012 range saw the introduction of the Pure Drive version equipped with a new state-of-the-art 1.6 dci engine with the Stop-Start system previously introduced on the 1.6-litre petrol model. This advanced new engine lets drivers enjoy the best of both worlds: greatly reduced emissions with apparently improved in-gear performance.

Replacing the 2.0 dci unit in manual guise, the 1.6-litre diesel not only boasts CO2 emissions of just 119g/km but also offers the same level of performance as the bigger engine. Thanks to its 128bhp, it's the most powerful of its size in the world, while its impressive 236lb ft maximum torque figure is exactly the same as the 2.0-litre's. Furthermore, the 1.6's peak torque is developed at only 1,750rpm with some 80% of that available from just 1,500rpm.

The resulting performance lifts this Qashqai above the 1.6-litre class — top speed is 118mph with 0-62mph taking 10.3 seconds for the most popular 2WD model. And this performance gain is not at the expense of the environment: combined consumption is 62.8mpg as against 47.9mpg for the 2.0 dci — that's an amazing 31% improvement.

The CO2 figure of 119g/km is also good news — a first year road tax bill of Ł0 and then only Ł30 for the second year onwards. For company and business car users, of whom there are many, the Benefit-in-Kind tax penalty is just 17%; in 4WD spec the CO2 figure is 135g/km, pushing BIK up to 21% and road tax to Ł120 for every year.

This latest Qashqai has also benefited from a number of innovative items of equipment including, for the first time in its class, Nissan's Around View Monitor and it's fitted as standard to all N-Tec+ and Tekna variants.

Using discreet external cameras, Around View Monitor makes manoeuvring and parking as safe and easy as possible by giving the driver a real-time, bird's eye view of the surrounding environment.

With the back row seats in position the boot provides a reasonable 410 litres but fold them down and this mushrooms to 1,513-litres, making it easy to see why this roomy vehicle is so popular with families and active empty-nesters. Unfortunately you don't get a spare wheel fitted as standard, just one of those dubious inflation kits. But at least a spare wheel is available and can be accommodated beneath the load floor — although the extra peace of mind will cost you another Ł112.

Another key purchasing point is the Qashqai's easy-to-drive nature. The command seating position provides excellent visibility out and the controls are all easy to see and to use. The seats and wide-opening doors allow hassle-free access and, I'm told, it's easy to load children into these seats. Even the even less able will have no problems getting in and out.

The Qashqai's suspension is set up to give a comfortable ride (even with the 18-inch wheels) rather than a firm one, such as that of many other big-wheeled, hard suspension crossovers. The only downside to this softer setting is that due to the height of the vehicle there's some bodyroll during faster cornering. Me, I can live with comfort rather than driving thrills — as can most real customers.

The biggest reasons to choose the new 1.6-litre turbodiesel are because of its low road tax and excellent fuel economy — my test drive covered the usual motorway journeys, local trips and stop-start traffic and saw the Qashqai return 53.1mpg. Impressive even though some way down on the official 62.8mpg figure.

The 128bhp engine pulls strongly and is responsive through the mid-range — but let the revs drop too low and the response is flat, and changing down several gears is necessary to bring the engine back into its power band.

Reasons to buy include the fuel- and tax-efficient new diesel engine, roomy and comfortable cabin, and ease of driving. Overall, the Qashqai is a well packaged and versatile vehicle.

And some reasons not to: bland styling, new engine lacks low-down grunt, significant price premium over the 1.6-litre petrol, and no spare wheel as standard.

This new engine will appeal financially most to high-mileage drivers, especially so to company car users. Lower mileage retail users might choose to save up to Ł3,000 and buy the 1.6-litre petrol version instead although annual road tax will be Ł135 instead of Ł0/Ł30 and fuel consumption will be in the order of 45mpg instead of around the 53mpg I saw on test. As they say in America: Do the math. — David Miles