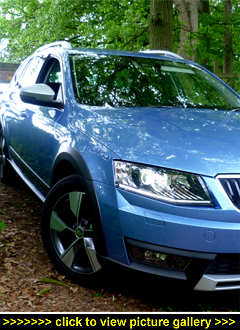 LOOKS-WISE THE SCOUT skilfully blends rugged with handsome. Strip away the badges and, particularly when finished in Skoda's fetching Denim Blue metallic, many would guess it to be a premium German sports estate costing many thousands more.

There's some extra inches in this latest Octavia bodyshell that's already popular as a family carryall but it's well harmonised with the styling, and down the flanks it looks particularly sleek and upmarket.

Fronted by one of the Skoda family's vertically-slatted black-and-chrome radiator grilles, a cleanly sculpted bonnet and honeycomb-pattern lower grille atop a restyled bumper, the Scout is easily identified by its jacked-up ride and silver front skid plate (there's another at the tail). Stand-out black wheelarch protectors neatly underscore the Scout's off-road-capable look.

Along with all-wheel traction the Scout officially returns a plastic-friendly 55.4mpg. Impressive on paper, but how did it score in real traffic on real British roads? Actually, amazingly well.

Our week's hard driving, much of it in the Sport driving mode (there's also Normal, Eco and Individual, which lets the driver configure his or her own dynamic settings such as steering weighting, etc) saw an overall average recorded of an impressive 52.1mpg — only a handful of cars get as close as that to their official 'lab' figures. Better still, less ardent drivers than MotorBar's test team should easily beat that and see the smiley side of 55+ to the gallon.

Along with 4WD, Scout estate models give you the choice of two muscular 2.0-litre diesel engines — choose between 147bhp paired with a clean-changing six-speed manual gearbox or 181bhp with a twin-clutch DSG autobox (as also found in the go-faster vRS Octavia) but which bumps up the price from Ł25K to Ł28K. To be honest, the 147bhp powerplant delivers all the performance you really need — and saving £3K is always nice.

'Our' Scout was running the less powerful 2.0-litre but that didn't stop it getting to 62mph in 9.1 seconds and running on to a 129mph top speed. Acceleration was always strong and eager and pick-up sharp thanks to the maximum torque of 250lb ft being on call from 1,750rpm so the 'grunt' is always there exactly when needed, whatever gear you're in — even 6th. Loping along motorways at the legal limit around 2,000rpm, the 147bhp 'lump' is aurally remote which helps keeps it all pleasantly hushed in the cabin.

Whichever powerplant you decide on, the chassis can take its best shot because the Octavia Scout is underpinned by the Volkswagen Group's MQB chassis — also found in entertaining 'drives' such as Audi TTs and the Golf. This modular platform serves up well-fettled and faithful handling alongside a compliant ride. The reassuring brakes and steering are of the 'fit for purpose' variety, working so slickly that you're never really aware of them and can simply get on with the business of driving.

Also doing their bit to make life hassle-free for the Scout driver is an XDS electronic diff-lock (to maximise roadholding and improve responses, especially when cornering) as well as a traction and stability control system. Plus, of course, you can flick between driving modes whenever you fancy using the button close to the gear stick.

One thing that shouldn't be taken for granted — because it's noteworthy in its class — is the Scout's load space, especially for cargo. Now measuring 4.7 metres nose-to-tail, there's a massive 610-litre boot, easily accessed via the powered (opening and closing) high-opening tailgate. The luggage cover blind slides easily in both directions, there are pop-out hooks for four bags and there's a load-through hatch.

For cargo duties there are convenient lever releases in the boot — pull them and the 60:40-split rear seatbacks spring-fold down on their own, expanding the boot to a huge 1,740-litre loadbay. Other practical touches include a reversible boot mat and a full-size spare wheel.

And when it's time to haul a load, the Scout's definitely good to go: with its four-wheel traction it makes a fine tow vehicle whatever it is you want to pull along behind, be it a trailer, caravan or boat. With the six-speed manual 'box it will happily manage 2,000kg braked — a worthwhile improvement over the previous model.

Swing open a door and while there's plenty of black present it's no black hole, even with the full-length two-section glass sunroof's powered sunblind closed, thanks to large windows and lots of well-considered metallic-look trim; three-stage heated black Alcantara and leather-upholstered seats add to the welcoming ambiance.

You'll feel at home the moment you slip behind the Scout's three-spoke wheel — the driving position is bang-to-rights, and the seat comfy and supportive with adjustable lumbar support (both front seats have it, along with height adjustment). Benefiting both is a sliding and height-adjustable centre front armrest.

It doesn't take many seconds to register the extra room — there's noticeably more of it than ever before, best illustrated by the fact that even with a brace of six-footers up front those relaxing in the rear seats will still have plenty of air around their knees. Headroom — a fist of it in the front — and legroom are both very good wherever you sit. Getting in and out, front or back cabin, is physically effortless.

The driver is well served by a multifunction wheel (voice, multimedia, phone, etc), central touchscreen (with proximity sensors that recognise when your hand is moving toward the display screen and bring up the intended function buttons ready to be used; there's also intuitive smartphone-style swiping and pinching movements for easy menu scrolling as well as map zooming), a foolproof and straightforward SatNav, colour trip computer (with today's indispensable function — a digital speed readout), voice control for the phone and the navigation, Bluetooth, DAB digital radio, and USB and Aux-in sockets.

The equipment list goes on with a sunglasses storage compartment, auto wipers, seven airbags (including one for the driver's knee), a post-collision braking system (if an impact occurs it automatically brakes the car to prevent it being propelled into oncoming traffic and activates the brake and hazard lights), LED daytime running lights, an ally pedal set and 17-inch alloy wheels.

Passengers travelling in the rear cabin are equally well catered for, starting with heated seats combined with comfortable backrest recline angles; throw in plenty of head, knee and foot room and lounging space is appreciably better than business class, especially with just two sharing the large centre armrest with its built-in cupholders — not that there will be any complaints even if three must travel side-by-side. Magazine pouches are provided, as too are usable door bins. It's also bright and airy in the back, thanks to long side windows and the massive sunroof that extends back past the rear headrests. Not a sun-worshipper? No problem — the one-shot powered sunblind will quickly block its rays.

All that four-wheel grip doesn't just come in handy for towing — combined with a 33mm increase in ground clearance (to 171mm), the Scout estate is configured to cope away from the blacktop. Front approach and rear departure angles have been improved and even if it never gets one of its tyres muddy, its all-terrain capability is still an essential feature for staying mobile and keeping safe on snow-covered and flooded roads.

Nice, too, to find that that those stylish skid plates are more than cosmetic marketing afterthoughts: out of sight there's underbody stone-guards to protect fuel and brake lines as well as your engine. More good news: they work as well on speed-bumps as they do on rutted and rock-strewn sections off-road.

If you're 'just browsing', know that the Scout stands scrutiny against the likes of prestige-badged Audi and BMW 4x4 estates as well as the likes of Vauxhall's Insignia Country Tourer, Subaru's Outback and VW's Passat Alltrack. Not only is this Scout one of the most practical estates in its class but it saves you thousands while giving you easily-usable, all-weather and all-terrain capability.

Really, though, you don't need to know a thing about all-wheel drive and diff-locks to make full use of the Scout's 4x4 abilities — it's all done for you and works seamlessly, delivering power to the back wheels whenever the system senses the front wheels' grip is waning; the rest of the time power is put down via the front pair. For those who do like to know all about the 'oily bits', the Scout uses a no-nonsense Haldex all-wheel drive system.

Trendy townie or all-weather country-dweller, you'll find the Scout is equally spacious for both passenger-carrying and load-lugging. Throw in genuine 4x4 grip, a good tally of kit, a comfortable ride and a decent sticker price and you don't need to waste your time scouting around for anything else. ~ MotorBar