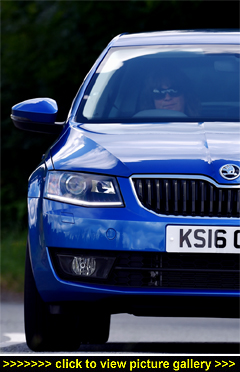 “The Sign of the Four was one
of Sherlock Holmes’ more baffling
cases. What then would the famous
detective have made of ‘The Sign
of the Three’ — where a four-cylinder
engine has been switched for one
with just three-cylinders but with no
apparent performance downside?”

THE WILLING 'VICTIM' is Skoda's Octavia — the backbone of the Skoda range that has proved hugely successful for the Czech carmaker. The Octavia's 1.2-litre four-cylinder engine has been switched for a 1.0-litre unit with one 'pot' less.

Even after taking on-board the D-word (Downsizing), it might seem a somewhat puzzling move — even if you happen to be Sherlock Holmes — given that the Octavia has some of the most generous family car dimensions around and will accommodate four adults in total comfort plus a huge 590 litres of luggage.

But you don't have to be a brilliant detective to solve the case because the figures do it for you: the new three-pot petrol-drinker pumps out 113bhp but its 109lb ft of torque is what matters more. Throw in a trim bodyweight (for such a capacious car) and the 1.0 TSI will hit 62mph from standstill in 9.9 seconds, run to 126mph, and return an official 61.4mpg in the Combined Cycle.

Admittedly, few cars manage to replicate their EU lab-generated economy figures in the real world but our actual average after a hard week's driving showed that the worst you should expect will be 44.7mpg — and, as Watson might well point out, probably better if you've a lighter right foot than a MotorBar road-tester.

Physically the Octavia hatch, despite its well-earned 'no-nonsense' tag, is quite an imposing car with clean-cut styling and well-balanced proportions. And unlike many, it doesn't resort to 'sculptured' panels or other styling gimmickry to stand out.

Inside is where it matters most though, and it's inside that the Octavia scores. The dash is neatly done with a large central touchscreen that on our SE grade model is an Ł800 extra but it comes with an excellent navigation system. Fit and finish trumps many of its rivals. You also get dual-zone climate control AirCon — not bad as this SE is only the second step up the Octavia trim ladder (from S to vRS there are seven levels).

Nice-action stalks, easy-to-read dials and a crystal clear driver's information display between the speedo and rev-counter that among other things shows your road speed digitally (as well as navigational prompts when appropriate) together help make being 'the driver' an agreeable experience. The SatNav incidentally, is of the easily-set-and-go variety and benefits from 3D mapping.

The good-looking two-tone cloth front seats (three-stage heating is optional) are well-shaped with effective but not pushy bolstering, lumbar adjustment and height adjustment that between them get you in the best position to use the good-to-hold, three-spoke leather-rimmed steering wheel with nice thumb cut-outs and remote controls for the audio and telephone.

All while surrounded by plenty of personal space, from more than a fist of it above your head to around your feet. Not only is the driving position spot-on but you can also see down to the bonnet's end. Large windows and effective door mirrors help make light of town driving while keeping the cabin airy.

Other well-considered touches in the cabin include a damped glovebox that doesn't bash your front passenger's knees or spill its contents when it's open; an always-useful overhead sunglasses storage compartment, and proximity sensing on the touchscreen — as your hand moves toward the screen it brings up the on-screen function buttons ready to be used; scrolling menus and zooming in and out of maps is done with intuitive pinching and swiping movements, so no problems there.

An SD card slot, USB, and Aux-in socket are standard-fit but tick the box for SmartLink (Ł150) and you can sync your smartphone with the Octavia's central display screen using MirrorLink, Apple CarPlay or Android Auto, either for entertainment or to receive turn-by-turn directions via a navigation app.

In the back seats is where it all happens — space-wise, it's LOL: Lots of Lounging. A fist of headroom sets the tone while the relaxing angle of the backrests and plentiful legroom make for a cabin you'll be happy to go places in.

Three side-by-side is doable, but when you're sprawled comfortably in either corner seat you may become a tad territorial. Why share indeed! For the record there are Isofix fixings for child seats on the outer back seats.

Where the Octavia truly trumps its rivals is south of the rear cabin: few competitors come close to its cavernous 590-litre boot — and that's with the 60:40-split rear seatbacks up. Fold them down and you'll free-up a huge 1,580-litre loadbay.

The Octavia hatch provides a large loading aperture although not being a dedicated estate there's a six-inch bumper sill lip to load over and a small step up from the boot floor to the extended floor created by the folded down rear seatbacks. None of which really harms its usability. And if you really must max-out on cargo space then there's always the estate with its 1,740 litres.

Despite the four-for-three swap in the engine bay, the 1.0-litre Octavia hatch tips the scales at more or less the same weight as before — but that's no bad thing as there's now more power and torque. It handles exactly as you'd want if it was your family in the car with you: predictably. That's not to say you won't enjoy driving it because the three-pot is a real sizzler — and bear in mind that the Octavia also comes in fire-breathing vRS guise and can handle 200bhp. Brakes are reassuring, but then they've got big ventilated discs at the front and with discs at the rear too.

The steering is fine — not too light; and it turns-in with assurance. Meaning it feels as much at home on winding B-roads as it does making tortuous turns in town. Throw in a slick gearchange action and a spirited engine and you have a family car that will keep you smiling whether it is school run duties or a run to Disneyland Paris in the summer hols.

This 1.0-litre TSI three-cylinder engine doesn't leave you feeling short-changed. It's a plucky little performer with an appetite for revs; use it hard and it growls appreciatively although most of the time it never intrudes into the quiet cabin — let it lope along in the higher gears on a light throttle at the legal limit and you'll barely hear it.

On paper its 113bhp doesn't sound a lot to move a large body but it's respectable enough; however, max torque comes in fairly low down the rev-band. Better yet, it's served up cleanly and can be used to maximum effect thanks to a well-chosen set of ratios.

Running up and down the six in the manual 'box is straightforward, courtesy of its light and satisfyingly 'clean' gearchange action, and in the lower gears the three-pot really gets the bit between it's teeth and feels especially game-on. If you prefer your gearshifting to be done for you, then a DSG dual-clutch automatic can be had, adding just Ł1,250 to the 1.0 TSI's on-the-road price.

All-in-all 'The Sign of the Three' is a good result for the Octavia hatch, providing an injection of fun into your daily driving and making the business of being a family driver all the easier.

With plenty of space inside its nicely crafted five-door body for people, luggage and cargo (class leading), the keenly-priced Octavia is tough on competitors. It's also comfortable to travel in, affordable to run, and the nippy new 1.0-litre three-pot powerplant makes it satisfying to drive too. ~ MotorBar