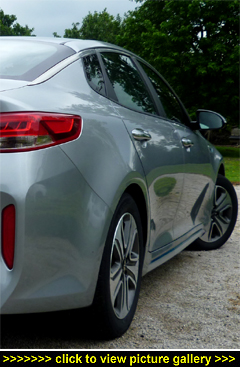 “So now we know — by the year
2040, all UK motorists will be driving
round in all-singing, all-dancing,
all-electric cars...”

SALES OF HYBRIDS HAVE DOUBLED over the past five years and, now that the country's all-electric deadline has been outed, are likely to accelerate dramatically with around 700,000 a year being bought by the time Brexit is completed.

With their promise of cleaner emissions (both carbon dioxide and nitrous oxide), today's plug-in hybrids already offer a good deal of the benefits one can expect from mid-21st century electric cars. Better yet, they come without the 'range anxiety' that still deters many motorists from taking the all-electric plunge.

Until the brave new electric world officially kicks-in, people must continue to live with traditional diesel and petrol engines — both of which are getting ever more fuel efficient with cleaner exhaust emissions. This is good news because the Optima PHEV supplements its electric motor with a petrol engine.

Looks-wise it's as handsome as any other Optima saloon, with wide wraparound LED front lights and, injecting that sports saloon look, a sweeping glasshouse roofline beautifully highlighted by satin chrome as it flows down to a spoiler-shaped boot lid.

Hints at its Eco credentials are subtle: light metallic blue accents to the familiar hi-gloss black 'tiger-nose' grille, side sills and rear diffuser. Eagle-eyed car buffs might spot the low-drag front and rear bumpers, and possibly even the active air-flap grille (when closed it reduces the drag co-efficient to an impressive Cd of 0.25). Overall it's an athletic look, one that stands out in any executive car park.

Until recently, you could only buy one of Kia's highly-praised Optima saloons powered by a 1.7-litre turbodiesel. Choosing the hybrid PHEV is straightforward because there's just one, albeit very comprehensively-equipped, trim level. It comes with a smooth six-speed automatic transmission and costs Ł31,495 after the Ł2,500 Government grant has been applied (conventional 1.7 turbodiesel models range from Ł21K to Ł30K).

So if you like your motors with all the bells and whistles, pound-wise there's not much in it. Neither do you need to sacrifice any peace of mind by going hybrid — all Optimas, be they turbodiesel or PHEV, are covered by Kia's industry-leading 7-year/100,000-mile warranty.

Thanks to impressively low CO2 emissions — just 37g/km — you won't pay any road tax for your Optima PHEV in the first year although you will have to pay Ł130 annually from the second year onwards. Plug-in Optimas are also exempt from the London Congestion Charge.

All you really need to know is that in its pure-electric EV mode the PHEV will lope along at a motorway-friendly 75mph with zero tailpipe emissions. Top speed in its HEV setting (blending electric and petrol power) is 119mph, with the more relevant 0-60mph acceleration figure coming in at 9.1 seconds. And, for those times that you wish to take full control of the gear-changing, you can flick the lever sideways a tad then nudge fore/aft for up- or down-shifts.

And because the electric motor generates its maximum share of the joint torque instantly from standstill, and switching between pure electric and dual petrol-electric happens über-seamlessly in the background, you only need to select your preferred driving mode (Eco or Normal) and then, as my driving instructor was overly fond of saying, just watch out for the other b*gg*rs.

On paper all PHEV's boast amazing economy — in the Optima's case, as much as 176.6mpg. If you're able to restrict your trips to less than 33 miles between battery pack top-ups (conveniently via the on-board plug-in port in the left-hand front wing) from a 240v/13amp home power source or public electric charging point, you really will get motoring that's as clean as it's cheap. In case you're worried how long battery charging takes, don't be: even a totally depleted battery pack can be fully charged in just three hours.

For drivers who need to do more miles it's not a problem because the battery pack is constantly being charged on the move: whereas traditional engines work most efficiently at steady speeds maintained over long distances, the PHEV likes nothing better than the never-ending lifting-off and coasting, braking and stop-go at traffic lights that's the bane of modern motorists. But while these town and city motoring 'stop-starts' aggravate drivers of conventionally-powered cars, they put a smile on the face of the PHEV driver as they're providing 'free' regenerative charging of the battery pack.

Because the PHEV's control system always works to obtain the best mix of both internal combustion engine power and electrical 'juice' (which, don't forget, is being replenished as you drive), we did what most Optima PHEV owners would do — let the plug-in software manage the hybrid system for optimum economy; as they say, why get a dog and bark yourself…

The result, at the end of a week's test driving on all roads (town, country and motorway) and in all conditions — with minimal home battery recharging — was an average of 51.7mpg with the bonus of very low CO2 and NOx emissions. For the record, Kia quote 53.3mpg for the Combined Cycle using a real-world combination of petrol and electric, so we were pretty close — and we weren't even trying.

So, for those motorists for whom economy is more important than saving the world: keep your battery pack fully charged!

It shouldn't be too hard as it takes but a few minutes to connect up and, like cleaning your teeth, plugging-in is something that fits easily into your daily routine.

If you can't always be bothered, it's not the end of the world — you'll still see 50mpg just relying on the petrol engine and whatever electric power the system can harvest during driving. Either way, you win.

While it may sound complicated when you read about what's happening behind the scenes, actually driving the Optima PHEV, especially in traffic with Kia's smooth and civilised automatic transmission, is about as easy and relaxing as driving gets — never more so than when you're gliding silently and serenely along in all-electric mode.

Naturally the PHEV needs some room for its battery pack and the Optima's is fitted beneath the rear seat and in the spare wheel well (so you get a tyre mobility kit instead of a fifth wheel). While this means some extra battery weight to lug around, the suspension has been retuned and the brakes uprated to offset this, so handling is as good as that of the 1.7-litre turbodiesel Optima saloons. As do the turbodiesel versions, the plug-in puts its drive down through the front wheels.

The power steering is fine and the extra weight, far from being a handicap, seems to help traction, particularly when cutting through corners. Stability is also reassuring and the PHEV feels satisfyingly 'planted'; again, the extra weight working in its favour. And not at the expense of ride quality either. A long wheelbase like the Optima's always benefits ride quality, as too do its no-lo-pro 215/55 tyres, and the plug-in soaks up the bumps well; even the impact from potholes is softened to a thump rather than a jarring jolt.

Within the Optima's near-five-metre bodyshell sits a very accommodating cabin. First impressions are upscale with brushed silver and hi-gloss black finishing and soft-touch materials, along with smart and tactile black cloth and faux leather-upholstered seats (three-stage heated); the driver is pampered the most with eight-way power adjustment (including a memory function) along with four-way powered lumbar support made better by a good-to-grip heated leather steering wheel rim.

The cabin architecture and layout is what you'd find in the non-plug-in Optima which guarantees plenty of space in all directions, including a full fist of headroom, as well as plenty of storage bins, cubbies and a large lockable glovebox.

There's also a handy spot for that all-important takeout mocha to fire up your day. Getting aboard and starting up is a slick experience with keyless entry and start as well as a driver-configurable automatic easy-entry driver's seat.

The cabin is refreshingly uncluttered with optimised switchgear and clear dials flanking a comprehensive driver's info display. Highlights include 3D SatNav mapping (the very useful junction auto zoom is brilliant on busy motorways) and another essential on today's roads, a digital speed readout.

Yet another well-considered feature is the 2zone climate control: not only is it very efficient, blasting out plenty of refreshingly cold air on baking-hot days, but it's also rather clever — if you're solo, you can press a button that, to save energy, cools (or heats) only the driver's side of the car.

Comms are fully loaded too: an 8-inch touchscreen with SatNav (that, amongst other things, helpfully provides the location of nearby public charging stations); Android Auto (for access to Google Maps, Google Play, hands-free calls and texts and voice recognition through smartphone apps); Apple CarPlay (Siri voice control, Apple Maps, calls and text dictation, music streaming and audiobooks downloaded to an iPhone); and Kia Connected Services — powered by TomTom, this allows real-time traffic updates, speed camera and accident blackspot alerts, plus weather, traffic and local point-of-interest information). A premium sound system is also standard-fit and it's a good 'un: a 590-watt 10-speaker harman/kardon unit.

Limo-like — that's the Optima's rear cabin courtesy of genuine full-stretch legroom and, despite the rakish roofline, deceptively generous headroom (a fist of it, actually). Plus loads of room for feet — three travelling side-by-side will not be treading on their fellow passengers' toes. Backrest angles are set for maximum comfort while delivering long-journey support.

This is a four-door saloon, so owners won't be expecting amazing cargo bay space but while the plug-in Optima does come with less boot space that the non-PHEV versions, it still manages a very usable and regular-shaped 307 litres.

The plug-in Optima saloon definitely gives you a taste of the good — electric — things to come; it's easy to live with and easy to drive, its hi-tech works unnoticed in the background to ensure you're getting the best economy at all times without you ever being aware of it, and unless you want to lock it in electric-only mode you need do nothing more. Boosting its appeal are its handsome looks and genuine kerb appeal, indulgently spacious cabin, and brownie point-earning super-low emissions. All of which makes it Optima Prime! ~ MotorBar