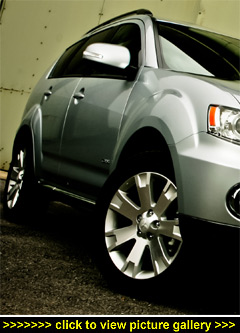 “Despite the media spotlight on
Mitsubishi’s i-MiEV electric car, their
heartland sales will continue to be
their 4x4 SUV range — particularly
the newly-revised Outlander SUV...”

THE OUTLANDER RECENTLY HAD A FACELIFT which included a new front-end that Mitsubishi's PR blurb calls a 'jet fighter grille' — do such aircraft have grilles? No matter. What's most important is not the grille but that behind it most models gain a new and more powerful but cleaner Mitsubishi diesel engine.

The distinctive grille and nose follows the new 'family face' of the Mitsubishi brand. There are also styling tweaks around the vehicle's exterior and the rounded rear-end with its LED lights and practical split rear tailgate.

The upper part of the rear hatch opens up as normal but the lower section drops down, making it very easy to load heavy items. Most Outlanders have seven seats in three rows but consider the sixth and seventh seats to be for occasional use only; they are literally only a thinly padded bench — which is uncomfortable — with limited legroom.

They do not even fold up or down that easily to create a flat load floor. But with the third row folded out of sight and out of mind, the Outlander, in its five-seat layout, is by far the best configuration. It has loads of cargo space, ranging from 220 litres with seven seats in use and 541 litres with five seats up, to 1,691 litres after the middle and rear rows are folded down. And for those who tow, the braked towing limit is 2,000kg.

The interior has also received a general upgrading although it still looks a bit bland and low-rent, even in the middle-of-the-range GX3 4x4 specification reviewed here.

My test car had the optional Ł1,200 leather upholstery and door trim — and it does look good. But having the leather trim but no front or rear parking sensors is a puzzle when such items are now more or less standard fit on mid to large SUVs. The interior is best seen as durable rather than inspirational.

The revised Outlander is available in GX2, GX3 and GX4 mainstream levels of trim and equipment. But there's also a Juro version which has resin under-body shields front and rear for extra off-road protection. And there's also a GX1 variant called 4Work — a commercial vehicle with no rear seating but VAT exemption status.

To add to the line-up complications, automatic transmission models in GX3 and GX4 trim use the older PSA Peugeot-Citroen 2.2-litre turbodiesel engine. All other versions use the much better new Mitsubishi 2.2-litre DI-D direct injection turbodiesel unit with variable valve timing which is cleaner, more fuel efficient and has more power.

Incidentally, Mitsubishi makes versions of the Outlander for Citroen and Peugeot — namely the C-Crosser and 4007 and both still use the less powerful and less fuel efficient PSA engine. Mitsubishi says that since the Outlander's 2007 UK launch, it has sold more than three times as many as the Citroen version and more than four times as many as the Peugeot 4007. Other competitors include the Honda CR-V, Nissan X-Trail and Hyundai Santa Fe.

Prices for the GX2 to GX4 with a 6-speed manual gearbox and four-wheel drive range from Ł21,549 to Ł27,999. Catering for those customers who want the size but not the all-wheel drive capabilities there's a two-wheel drive GX3 version priced at Ł22,799.

With trim, equipment and pricing facts and figures out of the way the latest Outlander, for me, is all about the new engine. Mitsubishi recently introduced variable valve timing — an industry first for turbodiesel engines — with their 1.8-litre DI-D engine, launched powering their ASX crossover/SUV.

Now the same technology has been brought to their new 2.2-litre, four-cylinder unit with positive results: there's a 14% increase in power over the previous PSA unit (from 154bhp to 175bhp), a 12% reduction in CO2 levels for manual transmission models, improved fuel economy and a welcome benefit in lower road tax bands.

The new Outlander range now starts in CO2 162g/km Band G at Ł155 for the 2WD version with the main-selling GX3 and GX4 models with manual transmission and 4WD having a 169g/km Band H rating. This means road tax for the first year of Ł250, reducing to Ł180 for the following years.

The official fuel economy for my Outlander GX3 4WD version with the new Mitsubishi motor is 43.5mpg. With test driving over all kinds of roads and conditions, and mainly in 2WD mode, produced a 44.3mpg average figure so at least the official figures are realistic.

The new engine is a free-revving unit for a diesel and once the turbocharger is fully blowing, at around 2,000rpm, the torque really feeds in with 280lb ft of 'grunt'. This makes it a lively and responsive performer in the mid range — just where you need it for overtaking.

It's no slouch or lacking in flexibility at lower engine speeds either, despite the fact that fifth and sixth gear ratios and the final drive ratio are relatively high to obtain the impressive fuel economy and lower CO2 figures. Dawdling along in nose-to-tail traffic this unit will quite happily accommodate fifth gear with only 1,000rpm showing on the rev-counter. It really is a good, practical diesel engine to drive in all traffic conditions (helped by the new six-speed manual gearbox that's light and precise to use) and because the engine is so flexible, 'block' gearchanges are easy.

As usual, the 4WD Outlanders have a dial control to electronically select 2WD, 4WD and 4WD Lock. Traction control is standard but with the absence of a low-ratio transfer box and no Descent Control, going down very steep hills off-road is all about being in the right gear. On road, the Outlander offers a comfortable ride and is relatively predictable in its handling in spite of its high ground clearance and tall body.

Downside: Low rent interior with thin carpeting and hard and bland plastics, rear row of seats of little use and not easy to raise or fold away, no parking sensors as standard.

Before it was a competent medium-sized 4x4 SUV; but with its new engine the Outlander has moved several places up the reasons-to-buy sales chart. With better fuel economy and lower CO2 emissions and more power, it's a win-win situation for the increasing number of UK customers returning to owning go-anywhere-at-any-time SUVs. — David Miles