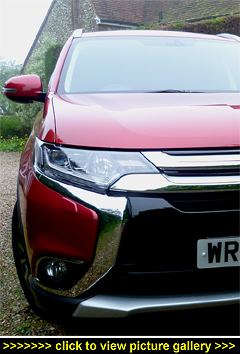 “Whichever one of Mitsubishi’s
extremely civilised Outlander SUVs
you choose — ultra-low emissions
PHEV plug-in hybrid or 2.2-litre
turbodiesel — you’ll be a winner.
But there’s more to it than just
tossing a coin...”

WITH DEMAND FOR SUVS showing no signs of abating, Mitsubishi has a lot to offer — starting with its accomplished, compact-sized ASX, its rugged Shogun 4x4 and, of course, its headline-making PHEV plug-in petrol-electric hybrid, which, in the four years since its 2012 launch, has sold a significant 100,000.

The PHEV and turbodiesel Outlanders are not exactly the identical twins you might initially assume from their looks. The PHEV (now with even lower emissions of just 42g/km) has five doors and five seats whereas the latest 2.2-litre 4x4 turbodiesel boasts seven. And while PHEV prices start from Ł34,249 (Ł31,749 after the Government Grant has been deducted), those for the 2.2 turbodiesel models kick off from a competitive Ł24,799.

Just a quick reminder about the PHEV — its appeal stems particularly from its über-low emissions and the equally low (7%) Benefit-in-Kind tax for company car drivers. And although the Government Plug-In Car Grant was recently halved, from Ł5,000 down to Ł2,500, that's still a worthwhile discount on the purchase price. Additionally, these PHEVs are exempt from road tax as well as the bothersome London Congestion Charge.

Other big draws of its 2.0-litre petrol engine-twin electric motor hybrid powerplant include a pure electric mode of 32.5 miles (perfect for a soothingly silent daily commute) and — so long as full use is made of the plug-in feature — an official Combined Cycle consumption of 156mpg.

So where does all this leave the Outlander PHEV's stablemate, the 2.2-litre turbodiesel? In a very good place, actually. Mitsubishi has always advised Outlander customers that if they expect to clock up distances as quickly as Air Miles Andy then they'd be better served, cost-wise, by running one of the turbodiesels.

If it's a while since you had a hands-on with an Outlander then you might not be aware that they've recently benefited from some styling enhancements along with significant upgrades to the cabin with even more kit and, more importantly, improvements to ride comfort and handling dynamics. It was always good before; now it's impressively better and more than able to compete against other SUVs such as the Honda CR-V, Kia Sorento, Land Rover Discovery Sport, Mazda CX-5, and Toyota RAV4 as well as similar models from Audi, BMW, and Volvo.

These facelifted Outlanders certainly look 'the biz' — our high-spec GX4 test car, finished in a gleaming rich red, had real stand-out appeal; the strong colour really suits the sportier new front-end styling. It wears plenty of opulent but quality-look chrome and the large three-diamond badge on its thrusting hi-gloss black nose leave you in no doubt as to its identity. Sleek LED headlights plus LED daytime running lights bracketing the grille further sportify the looks while body sculpting along the flanks adds to the leaner, more thoroughbred image, underscored by distinctive machine-faced, metallic black-finish, 18-inch alloy wheels.

As already mentioned, it's not just on the outside that the Outlander looks better, but inside too — the spacious cabin has taken a noticeable step-up in the ambiance stakes with a better grade of leather upholstery and high-gloss laminated trim and fascia inserts.

The seats, set high off the floor but still offering a fist of headroom, are easy to swing into when boarding. Once seated you'll find them to be comfortable and supportive, particularly around the shoulders, plus the bolstering is firm enough to keep you in place without pinching. Two-stage seat heating does a fine job of warming all your important bits — best of all it stays on for as long as you desire and doesn't just fade away.

The driver, you'll be pleased to hear, enjoys a powered seat along with a first-rate driving position and excellent visibility thanks to the regular-shaped rear screen and deep three-windows-per-side glasshouse — a joy, too, in a modern car, to be able to see the end of the bonnet from behind the steering wheel!

The wheel itself is good to hold with a shapely, leather-wrapped rim and is fully multifunctional (media, voice, phone, cruise, speed limiter) plus there are paddle-shifters for manual changing as and when you might prefer. The Outlander's Stop/Start engine button is close at hand on the fascia and although you don't need to use it much once you've pulled away, the leather-covered gear lever knob is a pleasurably comfortable fit in your palm.

The Outlander's infotainment system provides quick and easy access to its many features as well as the SatNav via a touchscreen set high up in the fascia. The graphics are crystal clear, as are the traditional design dials. Driver information is comprehensive: the selected all-wheel drive setting and transmission mode/gear is permanently shown in the driver's info display, as too is a range of graphic navigation prompts when you're being guided to a destination.

Another big plus is the roadside speed limit warning shown on the 3D mapping to alert you to the posted limits. Tyre pressures are also monitored, and you'll be advised when you need to 'take a break' from behind the wheel. All reassuring stuff. Behind the power-opening touchscreen is a CD slot — a thoughtful feature given that the vast majority of music-lovers haven't, as predicted, rushed to ditch their CD collections in favour of mobile devices. Also good to find are the generous in-cabin storage areas and cupholders — even more essential now that the powers-that-be have confirmed that a regular shot of caffeine is genuinely good for your health!

In five-seat mode the Outlander is extremely accommodating no matter what the size of your passengers. The individual sixth and seventh seats — adored by kids and Yes, suitable for adults too! — live under the boot floor; a quick tug on a strap is all that's needed to raise them ready for use. They even have adjustable backrests!

Just like the front doors, the rear ones shut with well-engineered efficiency — only the lightest push or pull is needed to close them first time, every time. Both sides of the middle-row 60:40-split/fold seating can be slid backwards/forwards to maximise passenger legroom or boot space, or to optimise the leg room between the second- and third-row passengers.

Those travelling in the middle row also benefit from generous headroom, multi-adjustable backrests, a large centre armrest with built-in cupholders, well-sited outer armrests, bottle-holding door bins and loads of knee- and leg-room — most definitely a place for some serious lounging ŕ deux. And three adults can travel side-by-side in a civilised manner without any tangled feet thanks to a low central tunnel. Getting in and out of the third row is straightforward thanks to the tilt-and-slide second-row seats.

With both back rows dropped (the second row seats fold totally flat, their seatbelts completely out of the way; the third row disappears completely into the floor) there's a whopping 1,608 litres of usable space in the seamlessly-floored, all-of-a-level loadbay. And all in seconds with no fiddling! At the other extreme, with seven aboard including the driver, there's still 128 litres for some squashy bags. Need more? No problem — the Outlander can tow (and has the 'grunt' for it) a further 2,000kg braked.

Yet another well-considered touch is the two-position luggage roller blind than can be matched to the length of the load bay if the second-row seats are slid backwards/forwards as well as allowing for the middle-row seatbacks to be even more fully reclined. And, unlike many carmakers, Mitsubishi have also though about what to do with it when it's not needed — it can be removed in seconds without a struggle and stows away in its own dedicated locker under the boot floor.

At the outset we mentioned that this latest Outlander is now dynamically better — press on and there's no doubt that this newest version, with its revised suspension serving up a more compliant ride, is one very sure-footed beastie. On the move, especially when you're in a hurry, it never feels anything but reassuringly responsive and agile.

Talking of 'grunt', when mated to the automatic transmission the revised 2.2-litre direct injected turbodiesel (a four-pot, double overhead camshaft unit) pumps out a worthy 147bhp backed by a muscular 265lb ft of torque from 1,500rpm. One-hundred-and-eighteen is the auto's top speed with the more relevant 0-62mph figure coming in at 11.6 seconds — go heavy with your right foot and it's surprisingly quick off the mark and certainly feels faster than the paper figure would have it. Certainly there's always ample urge on tap for a clean overtake.

Officially it returns 48.7mpg in the EU's misleading 'Combined Cycle' tests with 154g/km of CO2 emissions. So what's that in real-life? Forty-one per gallon is what we recorded over a week's hard driving (most of it in the Outlander's 4WD Auto mode rather than the more economical 4WD Eco setting), travelling mostly along quick and twisting country roads. Road tax won't break the bank either, costing you just Ł180 per year.

The turboed 2.2-litre is a likeable and quiet diesel engine at speed, and makes a good running-mate for the six-speed automatic 'box that also allows paddle-shift manual gear-changing at any point and for as long as you like.

The autobox offers the usual P-R-N-D with the addition of a handy Low setting. The foolproof 4WD push-button alongside the traditional handbrake lets the driver shift, on-the-fly, between 4WD Auto (for full-time use both on- and off-road), 4WD Lock (for max traction in extremely demanding conditions on tarmac or in the rough), and 4WD Eco, which uses front-wheel drive wherever possible but automatically switches to all-wheel drive the second more grip is needed.

The Outlander's excellent brakes also deserve a mention in despatches — while we perform test stops on every car we review we don't go looking for trouble; but sometimes it finds us. Due to another driver getting it completely wrong we had to perform a full-on emergency brake from 60mph when some fool sliced across three lanes of traffic on the motorway at high speed without any warning — the high-riding Outlander SUV performed brilliantly, hauling down its speed in a totally controlled and drama-free manner that left everyone safe although perhaps in need of a stiff drink! Normal stopping is, as you might expect from the foregoing, smooth and reassuring.

Many will like the fact that the 2.2 turbodiesel is a more traditional powerplant — just fill it up and no daily plugging in to the mains. Its quiet, comfortable, mile-eating abilities and confident all-weather handling dynamics make this large SUV a pleasure to ride in and to drive. Hardly surprising then that both it and its PHEV brother are proving so popular. ~ MotorBar