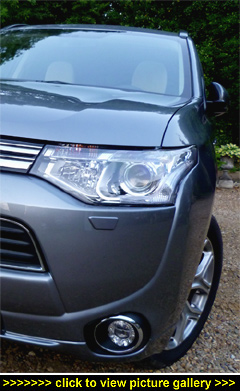 “They say there’s no such thing
as a free lunch. Maybe not, but
thanks to Mitsubishi there is now
such a thing as a ‘free’ drive.
For that you’ll need one of their
Outlanders, one with a badge ending
in a lowercase ‘h’ which identifies it
as a kind-to-the-planet, cutting-edge
Plug-in Hybrid Electric Vehicle...”

148MPG. THAT'S THE NUMBER that's got everybody talking. That and über-green emissions of just 44g/km. Plus, of course, the fact that you don't need to pay any road tax and, best of all, if you play your commuting cards right then you'll rarely need to visit a petrol station.

The million dollar question is: Does the Outlander PHEV really deliver 148mpg? Yes. And No. Yes because if you stick to its all-electric mode then you'll effectively use zero fuel which is miles better than 148mpg! Bottom line, it all depends on how the PHEV is driven.

Used for journeys shorter than thirty miles (the average UK daily commute is officially twenty-five) and fully charged prior to setting out so that all your driving is done purely in the full-electric EV mode you'll effectively get 'free' motoring because the PHEV will cover 32.5 miles using only the power in its battery pack.

Okay, so you'll have to pay for the electricity to charge up the battery pack from a household 240V/13 Amp socket or a professionally fitted 240V/16 Amp wallbox, but compared to filling up the tank with unleaded, that's peanuts (the at-home cost of a full charge is not much over a pound).

For those of you who can't handle the thought of even changing a fuse, plug-in mains charging is refreshingly simple — connect up the appropriate lead stored in the boot and a full charge using a 13 Amp plug takes five hours; using a wallbox cuts that to just 3.5 hours. Hook up to a public rapid charge point and you'll get an 80% charge in just 30 minutes.

Also, should you unavoidably deplete the battery pack during a long trip when you haven't had the time or the opportunity to recharge externally, you still have the petrol engine to power your Outlander. Alternatively, leave the PHEV idling and in 30 minutes it will self-charge to 80% capacity. So even if you can't find a rapid charge point in a big city or at the motorway services you'll never be stranded.

Of course, you can charge your battery pack while actually driving — and even when stationary. Battery regeneration is one way, and it's built into the system so that every time you brake the battery pack receives a boost because during deceleration the electric motors switch to 'generator' mode and put power back into the battery.

But it gets even cleverer — the intensity of regenerative braking can be adjusted using either the selector lever or the paddles behind the steering wheel. Use the maximum setting and lifting off slows the Outlander dramatically without your foot ever touching the brake pedal.

Not only that but the driver can reset the regeneration level at any time — for instance, when approaching a bend or descending a steep hill — for the most appropriate degree of 'engine braking'. And it's always a win-win situation: by using the electric motors to slow the vehicle you're also minimising brake wear.

If all of this sounds complicated, it's not — just one drive in the PHEV and it will all be second nature to you. All you really need to do is get behind the wheel, press the power switch, check the 'ready' light is on (confirming you're 'good for launch'), select Drive using the neat 'joystick'-style selector lever, press the accelerator… and away you seamlessly go — in uncanny silence.

The PHEV Outlander's hybrid drivetrain consists of a 2.0-litre petrol engine that develops 119bhp backstopped by a useful 140lb ft of torque. A pair of electric motors (one at the front, the other at the rear) each provide 80bhp although the front one produces 101lb ft of torque while the rear generates 143lb ft.

The PHEV system uses three driving modes depending on driving conditions and the battery charge level: EV, Series Hybrid, Parallel Hybrid. EV is an all-electric mode in which the front and rear motors drive the vehicle using only electricity stored in the drive battery. When the drive battery is low or when powerful thrust is required during rapid acceleration, the battery is supplemented with electricity generated by the petrol engine.

Finally, during high speed driving the petrol engine operates more efficiently than pure electric power, so the front wheels are driven directly by the engine and assisted by the electric motors.

The seamless manner in which the hybrid power is not only switched between pure electric and petrol but also delivered to the wheels is very impressive, and adds considerably to the refined cabin ambiance of the PHEV.

Go for the recently added range-topping GX5 model and you get a smart and welcoming cabin emboldened by modish two-tone soft Nappa leather with cream upholstery covering the seats. Matching leather is present on the fascia, dash, console and door panels and the high-grade fit and finish extends through to the luggage bay where you'll find a full size boot mat trimmed with leather to match the interior.

Getting aboard is easy thanks to wide-opening doors; the seat base is set at just the right height for the perfect sit-and-swivel entry manoeuvre. A spacious footwell permits driving in boots — often an essential for those with an active lifestyle, even if it is just walking the hound; knee room is equally generous and working up your body, there's a full fist of headroom.

The driver gets preferential treatment with powered seat adjustment although both front seats are equally comfortable and supportive (and have two-stage heating). The driving position is spot-on with excellent all-round visibility and a clear view over the bonnet — placing the PHEV accurately is a piece of cake. The smartly finished (in cream and black leather) multifunction wheel has remote controls for the cruise, phone, voice, audio and media and is as nice to hold and use as it is to look at.

The instrument pack is easy to take in with all the information (covering charge levels, range, mpg, drive mode, etc) that you need shown on the driver's information display between the two main dials (power meter and speedometer) as well as, if you like, on the central seven-inch touchscreen allowing you to decide how much or how little you want to know about the hybrid's working state. We actually kept it all down to the essentials: range, road speed and navigation.

The touchscreen serves all of your the infotainment requests plus there's a 420W Alpine sound system that's been acoustically optimised for the PHEV's cabin. Keeping you cool is an effective dual-zone climate control system — our test car's cabin was one of the coolest places to be in on 1st July (2015) when the temperature in the UK hit 98 degrees Fahrenheit (the hottest day ever recorded here).

There's ample room for three adults in the rear cabin (and that includes space for three sets of feet, too); easy lounging is the order of the day, more so for two who can prop themselves comfortably against the big padded centre armrest and snuggle into the heated outer seats. If you're an upright sitter you'll be please to know that headroom is also very good in the back, with a full fist of air between the top of your head and the roof.

The Outlander can also pack in the luggage thanks to its 463-litre boot; and that's with all the seats taken. Fold the back row and the loadbay expands to a versatile 1,022 litres with a totally flat cargo floor. Useful deep side bins and large storage trays under the boot floor also come in handy. Need to tow something? The PHEV will happily haul a braked 1,500kg.

With the 80-cell battery pack mounted under the floor between its axles, the Outlander feels palpably 'planted' — and it shows in the settled and reassuring cornering. The brakes, too, are up to scratch, and if you make full use of the 'regenerative' braking it's even better. Overall it feels focused, is responsive, and very driveable.

On the move the Outlander feels agreeably quicker than its paper figures — especially in full EV mode where maximum torque is delivered instantly, providing truly eager acceleration. A very big 'plus' is that the PHEV can keep comfortably to the legal limit on motorways using battery power alone.

Officially, using both battery and petrol modes, the PHEV has a cruising range of approximately 500 miles so goodbye 'range anxiety'.

The best hybrid mode figure we recorded was 89.7mpg and that was after starting out with a full battery pack but leaving the system to automatically juggle electricity with petrol (the petrol engine only cuts in at high speed or under heavy acceleration, powering the wheels directly).

Even when our PHEV's battery was out of 'juice' we still recorded 50.1mpg — amazingly good, especially so for an autobox crossover.

Most reassuring is the 4WD function: pressing the 4WD Lock button (while driving or stationary) enables the highest traction and stability at low to high speeds and is ideal for driving on low-friction dirt tracks as well as on tarmac in rain or snow.

And you're not restricted to blacktop — the PHEV's 4WD is not only useful on slippery roads but also gives you the freedom to explore the wild side. With its 190mm ground clearance we felt justified in taking it well off the beaten track and it never once felt out of its comfort zone.

A cinch to drive, the five-seater, full-size SUV PHEV comes with something few other cars have — the 'sound of silence'. And on top of the many benefits of a 4WD SUV, if your daily commute is less than a 60-mile round trip you can have environmentally-friendly, all-electric operation for everyday use and effectively drive for free! — MotorBar