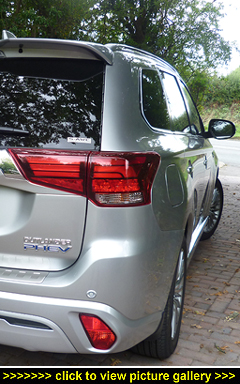 BUT THAT DOESN'T MEAN the Outlander PHEV is bought only by those keen to do their bit to save the planet. Being both a 'green' and fully-fledged SUV it also makes an ideal family motor.

Looking more like a large and sharply-dressed estate car, albeit a high-riding one, the latest Outlander sports a highly distinctive front-end with a sleek grille and equally sleek LED headlights, all emphasised by some eye-catching chrome-rich architectural detailing. The glasshouse roof is topped-off by a large roof spoiler while the tail benefits from a lack of visible tailpipes and rear light clusters that wrap around into the rear wings. The flanks are lean and clean, with the precise arcs of the wheelarches wrapped around multi-spoke 18-inch alloy wheels.

Few users understand the technology behind their iPhone; they just know what screen icons to press. Likewise, PHEV users don't need to grapple with the seriously clever technology that makes the Outlander's high-tech hybridised powertrain tick. Besides, finding out what buttons to push to get the best out of it is as easy as ABC.

Best of all, the Outlander's hybrid drivetrain self-governs admirably, switching seamlessly and automatically between each of its three drive modes as and when needed. Most of the time the two electric motors (delivering, respectively, 80bhp at the front axle and 93bhp at the rear for variable all-wheel drive) are driving the wheels powered by the battery pack beneath the boot floor, with the petrol engine acting as an onboard generator to keep the battery pack charged.

The PHEV powertrain responds well to the throttle, delivering crisp volt-fuelled performance thanks to the 'instant' hit of torque from the electric motors — unlike combustion engines they don't need to build up power with revs but deliver their maximum output instantly.

Acceleration is smooth and refined, particularly in Sport mode, and when it's active (contributing drive to the front axle, notably when accelerating and at motorway cruising speeds) the upsized 2.4-litre petrol engine makes for determined yet unruffled progress, serving up zero to 62mph in 10.5-seconds and running on to a 106mph top speed — more than enough for the UK's legal limit.

Should you decide to glide along in soothingly silent pure-electric mode then you can — and at speed of up to 84mph. In this 'EV Priority' mode the Outlander is powered by both the front and rear electric motors using energy sourced from the battery pack. Should you wish to save your battery charge for, say, a city part of your trip, just press the Save button; alternately, pressing the Charge button starts the petrol engine charging the battery pack.

Next up is the 'Series Hybrid' mode which is automatically activated whenever some extra muscle is called for; accelerating hard, driving up a steep hill or when the battery pack is down to its last few minutes of charge. In this mode the front and rear motors are still powering all four wheels but the 133bhp/155lb ft petrol engine will kick in to boost the battery. If there's enough juice in the battery pack to manage without any petrol engine help the system switches back to EV Priority mode.

Finally there is 'Parallel Hybrid' mode. In this setting the petrol engine powers the front wheels (while simultaneously charging the battery) in partnership with the front electric motor while the rear motor powers the rear wheels. Again, the system reverts to Series Hybrid or EV Priority mode as much as possible. This Parallel Hybrid mode is automatically activated at high speed.

The driver can override these self-selected modes by locking the PHEV in electric-only mode which, providing the battery pack is fully charged, will allow it to cover up to 35 in-town miles. For many users this will be perfectly fine as they're likely using it to commute into cities that, sometime in the not too distant future, will be barring all but zero-emitting vehicles from their streets. The good news is that your Outlander will never be 'outlawed'.

For those able to restrict their journeys to, say, 25-or-so-mile runs, and then recharge the battery pack from either the mains (via a domestic 13-amp socket: five hours for a full charge) or a public fast-charging point (to 80% in just 25 minutes!), motoring will be cheap indeed. Remember, if there's nowhere to charge the system's fallback is to charge itself using the petrol engine. All of which means total peace of mind because you'll never be stranded with a flat battery. Goodbye 'range anxiety'!

During driving the charge can also be boosted by the regenerative braking that 'harvests' energy every time you lift off the accelerator. Again, you can leave this to the plug-in's AI to oversee or you can flick the gear-selector into its B position for regenerative braking or use the paddle-shifters on the steering wheel to select any of the six intensity levels for the harvesting: with a strong setting,lifting off will also slow the car — effectively providing 'engine braking' when descending steep hills on or off road. If this all sounds daunting, it's not because unless you choose to assert control everything is done for you with no fuss.

Now, about that headline 139mpg... If its über-economy you're after then you must plug-in at every opportunity. Kept in EV mode and using the Outlander for trips of 28-35 miles between 3-pin plug charge-ups from the domestic mains sees the Outlander using virtually no petrol at all (which is better even than 139mpg) and is the secret to accessing the plug-in's sweet spot.

Driving more spiritedly and keeping up with traffic (so using the petrol engine as well as the electric motors), but with mains charge-ups only as and when we could get back to base, the overall mpg figures were still impressive — 55.1mpg. Few owners running a large automatic 4x4 SUV (using either straight diesel or petrol) would dare complain about that.

Climb in and settle behind the wheel and you'll immediately feel relaxed and at ease — the commanding driving position provides a fine view over the bonnet and a regular-shaped rear screen and three deep windows per side makes for excellent all-round visibility. The improved seats are satisfyingly supportive, particularly around the shoulders, and the bolstering is good but not overdone so it's easy to get out again at your destination; the leather feels good to the touch and both the driver and passenger benefit from height-adjustable belts and two-stage seat heating. The driver goes one up and gets powered seat adjustment.

The cabin is spacious with plenty of room in all directions — from the footwells, where there's ample room to allow driving in boots, up to your head (even a six-foot driver will have very generous headroom), and the broad centre tunnel ensures plenty of space between the front seats, so the wide centre armrest can be shared with no nudging.

The fascia is dominated by a large central panel housing the infotainment touchscreen (set at the same height as the revised driver's instrument cluster so it's easy to switch your gaze between them and quickly back to the road with minimal distraction), underscored by the dual-zone climate controls.

The heated, leather-wrapped wheel is multifunction (media, voice, phone, cruise, speed limiter) and you won't need to read the handbook to work out what does what. The instrument panel's two dials — one for charging information; the other a trad-look speedo — are crystal clear and set either side of a multimode driver's information display.

Entry is keyless with a Stop/Start button conveniently sited on the dash. Close to your left thigh is the joystick-style selector lever and various drive mode switches. Looking at the seven-inch touchscreen you won't, unfortunately, find an inbuilt navigation system — with more and more drivers using a linked smartphone to get navigation directions optimised for traffic conditions, Mitsubishi have gone with the flow. Some, us included, would still prefer a built-in SatNav but c'est la vie!

That noted, smartphone connectivity is a doddle with Apple CarPlay and Android Auto both standard and, of course, it's simple to make and receive calls, access text messages and listen to music safely while driving. Also standard is remote smartphone App compatibility, Bluetooth, and a DAB digital radio.

In-cabin storage will cope with a family's odds and ends and includes a real-world glovebox, large storage bin under the front central armrest, and bottle-holding front door pockets and — now that a regular shot of caffeine is officially good for you — the indispensable cupholders to go with your habit.

The PHEV comes in five trim levels and the popular middle-range '4hs' spec comes very well equipped. Standard kit, in addition to all that mentioned elsewhere, includes dual-zone climate control, front and rear parking sensors, reversing camera (with a standard rear-looking as well as a 360-degree bird's-eye view of the Outlander and its surrounding), electronic parking brake with auto hold, electric pre-heater, privacy glass (from the B-pillars back), heated powerfolding door mirrors (on demand and automatically on locking and leaving), an auto-dimming rearview mirror and, naturally, power windows.

For those wanting a competent SUV the 4.7-metre Outlander offers space and practicality, and with a 2,670mm wheelbase the cabin is extremely accommodating. Those travelling in the middle row sit about six inches higher than those in front but still enjoy generous headroom. Plenty of knee- and leg-room, multi-adjustable backrests and comfy seats along with a large centre armrest with built-in cupholders plus well-sited outer armrests make it all the more inviting and most definitely a place for some Strictly Come Lounging.

For 2019 the Outlander's suspension, steering, brakes, all-wheel drive and hybrid powertrain have all been fettled. Rise-wise, improved body control and new damping definitely make it feel more compliant and comfortable; it helps, too, that in-cabin refinement is good with well suppressed road and wind noise, and that it cruises motorways confidently and quietly.

A stronger bodyshell provides a better base for the suspension to do its business and, combined with the upgraded all-wheel drive system, makes for decent cornering poise and sure-footed traction. Add to that a quicker steering rack with accurate turn-in and beefed-up braking and you have a well-resolved package delivering reassuring handling dynamics whether you're driving alone or chauffeuring your tribe.

Given it has permanent all-wheel drive along with 190mm ground clearance, effective off-road angles (approach: 21.0° / breakover: 19.0° / departure: 22.5°) and a 400mm wading depth, the Outlander PHEV will take you safely off the beaten track. Again, as when you're on the blacktop in tricky low-grip weather conditions (a Snow driving mode is just a button-press away) you can trust the drivetrain's 'brain' to manage the traction for you when you're far from the tarmac. As you might expect, there's also a Lock mode for the 4x4 that makes pulling a caravan or trailer (up to a braked 1,500kg) both safer and easier.

A powered tailgate (opens/closes via the dash button as well as the key) makes for easy access to the boot. Even with the battery pack secreted away under the floor in the back, the boot still offers up 463 litres along with a further 35 litres in an underfloor cargo box. Drop the fold-flat 60:40-split rear seats and you'll triple that to a van-like 1,602-litre loadbay with a seamless and totally flat floor.

Although the Outlander PHEV is a genuine 4x4, plugging-in is more important than mud-plugging — plug-in regularly and you'll reap impressive financial savings on your running costs. Added to that is the smart upgraded cabin, sure-footed all-wheel drive handling and notably more polished driveability. And if you're using it to move your family around, there's nothing quite like it for the money. ~ MotorBar