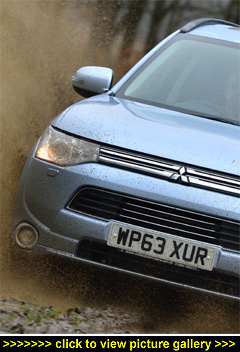 “How many electric SUVs are there?
Just one: the new Mitsubishi
Outlander PHEV is a plug-in hybrid
that’s also a proper SUV 4x4.
The good news is that you really
can afford one!”

YOU'VE BEEN ABLE TO BUY an Outlander diesel since last year, so why should you consider the new PHEV? Partly because it's exactly the same price as the diesel — at between Ł28,249 and Ł34,999 (after government grant), it matches the diesel spec-for-spec. And just over Ł28k for a plug-in hybrid is groundbreaking, especially when you consider that the Volvo V60 costs Ł43,775.

So what exactly is a PHEV? As its Plug-in Hybrid Electric Vehicle acronym suggests, you're going to have to plug it in to make the best use of its capabilities. That means charging it in one of three ways: at home on a three-pin 13amp system (five hours); on a 16amp wallbox (3.5 hours); or at a public rapid charge point (30 minutes to achieve 80% charge). The home charge cost is around Ł1.20 per slug.

Once fully charged, you can drive the Outlander in EV mode for up to 32.5 miles. It's all but silent, as you'd expect from an electric vehicle (although the PHEV does emit a noise to alert pedestrians of its presence at up to 22mph — something that resembles a kind of refined alien spacecraft). The torque response is instantaneous too, providing very eager acceleration in pure EV mode.

Unlike many hybrids, the Outlander can travel at speeds of over 70mph on battery power alone, so this really is an EV for all occasions. You can also press a 'Save' button to, for example, keep your EV charge for city use later on in your journey.

The petrol engine only cuts in at high speed or under heavy acceleration, and then in an impressively seamless way, and actually powers the wheels directly. It also cuts in when the battery charge gets low, to recharge the system.

So what's the fuel consumption like? Well, if you only do short journeys, it's zero. The official EU figure is 148mpg in hybrid mode, and 48mpg in petrol-only mode, which you're likely to be using on long journeys. Mitsubishi calculates that journeys of longer than 106 miles will be cheaper in a diesel, but anything less and the PHEV is the one to have. By the way, why didn't Mitsubishi opt for a diesel hybrid? Mitsubishi cites the reasons as good efficiency from its petrol powerplant, no particulate filter clogging issues and lower benefit-in-kind tax than a diesel.

Mitsubishi is claiming no compromises for its PHEV. So while the Volvo V60 PHEV has less boot space than its fossil fuel equivalent, the Outlander's remains virtually the same. And while the Ampera is limited on rear seat space, the Mitsu's rear seats sit just 2mm higher than in the diesel. That's because the batteries sit under the seats — but that also means the packaging precludes a seven-seater version (only a five-seater). And, unlike many hybrids, the PHEV is capable of towing, too — up to 1,500kg (the same as a Honda CR-V diesel).

The Outlander PHEV is actually faster than the Outlander diesel — 0-62mph comes up in 11 seconds (versus 11.7). And the weight distribution is also better for handling. Speaking of which, the Outlander is competent, if not cutting-edge, to drive. There's lots of sophisticated gear such as Active Yaw Control to keep things safe and under control, although body roll is always present.

The steering feels somewhat dead around the centre line but weights up nicely as you go through corners. The only bit I don't like is the brake feel. Like most EVs, the pedal reaction is instantaneous (good) but then it loses all sense of progressiveness (not good).

However, there is a way of avoiding using the brake pedal almost completely: use the paddles behind the steering wheel to alter the level of battery regeneration and suddenly 'engine braking' can become so strong that you rarely need to use the brake pedal.

How about off-roading? Actually, the Outlander is a proper 4x4, cleverly using the electric motors front and rear to power both axles — and so obviating the need for a propshaft. You also have a 4x4 Lock button, just like on any serious 4x4.

To be honest, my test drive didn't provide much opportunity to test the system out — it went comfortably over grass is all I can say. And its 190mm of ground clearance also definitely helps crossing rutted fields.

As for equipment, the base GX3h (Ł28,249) has plenty of luxury items like alloy wheels, cruise control, dual-zone climate control and power-folding door mirrors. Step up to the GX4h (Ł32,899) and you also enjoy touchscreen SatNav, HID headlamps, heated seats, reversing camera, leather trim, sunroof and a powered tailgate.

Peace of mind is provided by the five-year/100,000-mile warranty on EV components and a Ł500 three-year servicing package. The residual value figure of 49% after three years and 30,000 miles is also very strong.

For the price of a high-spec electric vehicle, you can have a plug-in hybrid that offers the prospect of 100% electric commuting (based on the fact that the average daily commute in the UK is 25 miles), with no range anxiety attached. And of course it has all the tax advantages of an electric car: zero-rated VED, no London Congestion Charge, and a 5% benefit-in-kind tax rate for company car drivers.

Yes, you'll still have to rely on fossil fuels on many journeys but the impact it will make environmentally should be much less. Equally importantly, if you're a business driver, it will make much less impact on your wallet too. — Chris Rees