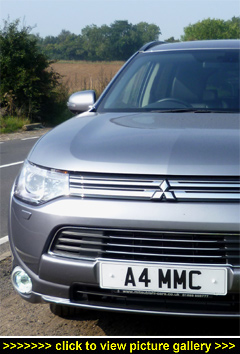 “Hyperbole. It’s everywhere but
that doesn’t mean you should ignore
every bit of PR puff you hear.
For example, Mitsubishi’s all-new
Outlander PHEV plug-in 4x4 is
being called ‘a genuine game-
changer’ — but it is!”

FOUR-BY-FOUR SUVs, once mightily scorned — but still bought in large numbers (250,000 of them in 2013; and still rising) because of their undeniable 'all things to all men' versatility — are now, thanks to Mitsubishi, being lauded for their 'greenness'!

The all-wheel drive, five-door, five-seater Outlander PHEV SUV makes use of both electric and petrol power — and can travel a useful distance on electric motors alone: 32.5 miles. That's more than enough for most average daily journeys whether it's to the shops or the office. If these distances match your daily needs then you'll rarely need to visit a filling station for a fossil-fuel fix.

More good news? The PHEV emits just 44g/km of CO2 which means no road tax and no London Congestion Charge. And not only is this plug-in, family-friendly 4x4 sports ute officially capable of 148mpg, but it also qualifies for the Government Plug-in Car Grant which lops Ł5,000 off its purchase price.

For a change it's the 'man in the street' who's getting the best deal here because, unlike some car-makers, Mitsubishi is not selling its PHEV technology with a premium mark-up. Prices range from Ł28-Ł35K (after applying the Ł5,000 grant) which means you pay the same for a PHEV Outlander as you would for a conventional diesel-powered one. The hybrid components, incidentally, come with a five-year/100,000-mile warranty.

As already mentioned, the PHEV's power comes from two sources: a 119bhp four-cylinder 2.0-litre direct injection petrol engine working alongside a pair of independent electric motors each with 80bhp, one of which drives the front wheels and the other only the rears. Both motors feed off the drive battery pack.

Despite all the high-tech wizardry orchestrating its hybrid powerplant, driving the PHEV is simplicity itself: you press the start button then select either Drive, Neutral or Reverse. There are three distinct drive modes in D, automatically selected depending on the driving conditions and the battery charge level. The first of these is the all-electric EV mode which is fine for city driving and commuting — it uses the electric motors powered only by electricity stored in the drive battery.

Next there's the Series Hybrid mode for when the drive battery level is low or when powerful thrust is called for during hard acceleration or hill climbing — the extra electricity is provided by the 2.0-litre petrol engine functioning in its generator mode. During high-speed driving — Parallel Hybrid mode — the petrol engine directly drives the front wheels, assisted by the electric motors.

Not that you notice any switching between modes — when the petrol engine joins the party it does so seamlessly with nothing more than a muted hum to betray its participation. As usual with electric motors, acceleration and throttle response are smoothly, instantly punchy.

A major Outlander PHEV plus point is that it brings freedom from the dreaded electric vehicle bogeyman — range anxiety. For a start, even if you use up every last drop of your electric 'juice', by supplementing the electric motors the petrol engine guarantees an extended range of over five hundred miles.

Unfortunately we were unable to recharge properly during our week with the PHEV (out in the sticks with no reachable mains power point) which you do need to do before your journeys to make best use of the electric drive and get acquainted with that headline 148mpg figure.

Consequently our test average worked out at 39.7mpg but be aware that that was petrol-power-generation-only driving in the 'extended' mode, and with most of our test miles being on fast-moving motorways. Used in the manner it's designed to be used, 148mpg can really be yours.

The drive battery can be charged by the PHEV's petrol engine during normal driving but it also has a nifty trick up its sleeve: if you're unable to plug into your household's 240-volt mains supply for a full recharge (about Ł1.50), then your PHEV can self-charge its battery pack to 80% capacity using the petrol motor as a generator — just leave it idling for 30 minutes (the same time it takes for an 80% charge using public rapid charge points).

But the PHEV is not just a stealthily-silent on-roader — the 4WD Lock button alongside the handbrake links you in to the Outlander's traditional off-road capabilities; albeit managed in a different way to non-hybrid Outlanders with the front and rear motors driving their respective sets of wheels in sync. It's fine for low- to medium-speed driving on dirt tracks and off-road as well as for driving on proper roads in rain or snow.

Step aboard the Outlander and you'll find the cabin well laid out and both functional and liveable. There's plenty of space and the black leather seats, with light but effective bolstering, make it even more inviting. If you have the helm, then a first class driving position can be quickly set using the powered seat controls.

Seated in the PHEV you're high enough off the road for a clear view over most other car traffic. And thanks to excellent visibility in all directions (a third side window significantly helps rear three-quarter visibility), the Outlander is easy to place and park.

Having just two pedals ensures plenty of foot room; there's also good knee- and shin-room along with a proper left foot rest as well as a driver's knee airbag. The wheel is multifunction, offering easy control of audio, voice, and phone as well as of the adaptive cruise and speed limiter.

In the instrument cluster is a standard analogue speedometer flanked by a hybrid-themed electric power meter showing what's happening to your juice: it's easily understood and clearly defined by three sectors: charge (blue), eco (green), and power (white). It's not something that you have to keep an eye on — like your speed or range...

The more important range (both electric and petrol) readouts are shown in the driver's display between the two main dials, along with other useful information such as trip, external temp, current selected gear, and the degree of regenerative braking.

The PHEV's handbrake is of the traditional pull-up type (still the most popular choice with drivers), and the cabin offers plenty of stowage space — a large glovebox, a big centre bin (with a lift-out upper-tray) topped by a wide armrest that can be shared by the driver and front passenger. The bottle-holding door pockets are also of a real-world size, all of which contribute to the PHEV's pleasant and practical character.

The rear cabin is equally inviting, with easy access and exit to and from the comfy rear seats that are divided by a very-usable drop-down armrest with built in cupholders. As in the front, you sit high off the floor so there's good lower leg comfort. Plus there's lots of space for knees and feet as well as a fist of headroom even when sitting upright. The seatbacks adjust through a number of positions from sitting up straight to relaxingly reclined. And, confirming the PHEV's status as a genuine five-seater, the minimal transmission tunnel allows a third person to travel in the middle without cramping their wingmen.

Five adults' luggage is easily accommodated in the 463-litre boot. If there's just the driver and a front passenger making the trip, the 60:40-split rear seat bases lift and tumble and the backrests fold down to form a totally flat and uninterrupted loadbay floor offering a 1,022-litre cargo capacity. Lift up the two-section boot floor and you'll find two deep storage trays. And should you have a need to tow, the PHEV will happily pull a braked 1,500kg — ample to manage a medium-sized caravan.

On the road, despite the 190mm ground clearance, the PHEV feels reassuringly 'planted' — helped by the additional weight of the battery pack, located under the floor in the centre of the vehicle. Manually maxing the regenerative braking (via the gear selector or the steering wheel paddles) not only recoups the most battery recharging every time you lift off the accelerator, but also provides the strongest 'engine braking' which adds to the PHEV's driveability.

It steers accurately and never feels short of grip and you can press on with no worries. When you need to kill your speed the strong braking (both in the first stage, if you've selected maximum regeneration, and then when the disc brakes chime in) is strong and confidence-inspiring.

Ride comfort is as good as you'll find on a non-hybrid Outlander; slightly firmer maybe, but in a nicely compliant way. And, of course, it's always quiet in the cabin.

A never-ending source of irritation for today's motorists is heavy stop-start commuter driving. However, Outlander PHEV drivers will punch the air with glee in these conditions. Why? Because all that braking charges their drive battery thus providing plenty of free all-electric driving.

The Outlander PHEV is currently the UK's best selling plug-in hybrid vehicle — no surprise at all once you've driven one. It offers all the usual 4x4 versatility and practicality of a conventional Outlander sports utility vehicle along with amazingly good fuel economy — plus its 'petric' power combo offers a 500+ mile range. Best of all, range anxiety is banished forever. — MotorBar