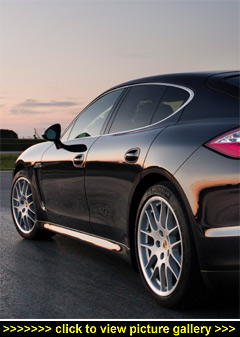 “Porsche, as everybody knows,
built its reputation with its small and
agile sports cars and its evergreen
911 model. That hasn’t stopped
them broadening the brand’s appeal;
first with the Cayenne SUV and now
the executive four-door Panamera...”

THOSE OF A CERTAIN AGE will remember the Porsche 928 of the 1980s [We certainly do: a great drive and a fabulous, growly V8 — Ed] and to me the Panamera is its natural successor. It's a modern version of the 928 which sets a new benchmark for executive saloons and hatches without diluting the driving dynamics and, as such, is very appealing to Porsche owners who may want or need a genuine four-seater.

There are seven versions in the Panamera line-up sold in Britain. They all share the same four-door+tailgate, four-seat body and are priced between Ł61,400 and Ł97,400.

Depending on your choice of 400/500bhp 4.8-litre V8 or 300bhp 3.6-litre V6 petrol engines, you can have either rear or four-wheel drive with either a six-speed manual 'box or a 7-speed automatic sequential transmission. To my mind, if you want the full benefit of the model you must go for the all-wheel drive 4S. For the record, in ten months during 2010, Porsche GB has sold nearly 700 Panamera models of which 40 per cent were the S and 4S versions.

The first impression of the Panamera 4S is that it is a big car — it measures 4.9 metres long and 1.9 metres wide, and has been carefully styled to incorporate design cues from the 911 and the Cayenne.

Open the doors and their lightweight feel may surprise you; for those in the know, it's a clue to the Panamera's power-to-weight performance advantage.

The Panamera 4S gets its power from a 4.8-litre V8 petrol engine, and it's delivered to the wheels via a seven-speed PDK sequential automatic powertrain and thence to the road via permanent four-wheel drive.

It is a truly awesome package and not only because it serves up instant and seriously strong power with incredible smoothness, but because it can return reasonable economy for what you get. For the record, official fuel consumption figures are 17.2mpg (urban), 25.4 (combined) and 34.9mpg (extra-urban). The Panamera's clever fuel saving technology includes an automatic stop-and-start system which is part of the energy capture package.

On the move, the creamy-smooth changes up or down the 'box under part or full throttle are all highly refined, and you're never left hunting for a gear to accelerate. Fingertip spoke-rockers (traditionalists can use the selector lever) allow you to fully exploit any desired ratio.

The throttle is both well-weighted and smooth and matched by the precision and feed-back from the footbrake. It slows the 4S very quickly indeed and with absolute control; no drama, and no need even to push hard to bring about a quite dramatic stop.

Turning to the steering, the Panamera's system is finely balanced with reassuring weight at speed plus an easy ability to turn in a tight space when parking or manoeuvring slowly in town. There's no vibration or kick-back, and at speed the 4S runs reassuringly arrow-straight.

You can hear the big wheels and tyres on coarse surfaces but surprisingly, given their size, there is no deviation. And with remarkable compliance in the suspension, the Panamera soaked up really bad bumps and potholes with notable aplomb — and without letting anything be felt inside.

At the other extreme, the 4S's roadholding proved to be tenacious on any surface; the handling was near neutral and it was never thrown off line by mid-corner bumps.

Despite the Panamera's mass, Porsche has done a good job in keeping weight down to around 1.8 tonnes and consequently it felt remarkably agile.

Secondary controls are very closely grouped around the column, steering wheel and the driver so everything is immediately to hand even if the proliferation of similarly shaped buttons on the centre console needs familiarisation to get right first time, every time. Instruments are reasonably sized and very clear and sited directly in front of the driver.

Near-silent wipers clear the screen very effectively, the headlights are extremely powerful and far reaching and the visibility is better than I expected given its coupe profile. That said, you do have a blind-spot over the shoulder when pulling into traffic.

For a coupe, it's very roomy in the back. Access is good, the front seats offer plenty of adjustment and not only do all four seats hold their occupants very securely but they're also markedly supportive. For the record, the easy-loading luggage area can be expanded from 445 to 1,263 litres although it's not a very deep compartment.

Silence is golden and in the Panamera it is outstanding. Doors close with a gentle whomph, the wipers do not make any noise when working and there is little mechanical intrusion from the powertrain. As already mentioned, you can hear the tyres over the road but suspension rumbles are very low by comparison. Open the Panamera up and the V8's engine note becomes more noticeable, but it's a pleasant sound.

The thought and care so evident throughout the Panamera's design and build means it's a very refined and sophisticated grand tourer — particularly so in 4S guise as reviewed here.

Even Porsches aren't quite perfect. Against: Expensive for what it is and very costly to run, rear-quarter blind spots and a shallow boot. Minor points, really, when you consider the plusses: Fast, practical, refined, classy with brilliant handling and stunning to drive.

I would take issue with those who say it's 'just a four-door 911'. It is nothing of the sort; rather it's a different member of the family tree and to me its roots lie in the 928. The Panamera 4S does all that the 928 did, but very much better and with greater performance and practicality; it not only upholds Porsche's reputation, it extends it. — Robin Roberts