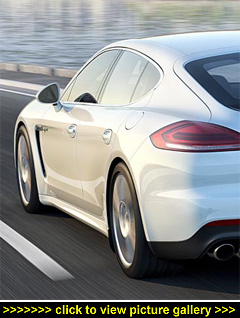 “Who exactly is the customer for
Porsche’s plug-in hybrid Panamera,
the S E-Hybrid? Well, I’ve actually
met him. A neighbour of mine owns
one, and when I asked him what
inspired his choice, he said candidly,
‘My accountant told me to buy it’...”

THAT NEATLY SUMS UP the raison d'etre of Porsche's semi-electric super-saloon. It's all about the numbers — specifically, the CO2 figure.

At a remarkable 71g/km, that's low enough to qualify it as an Ultra-Low Emissions Vehicle, giving it all sorts of tax benefits (including, until recently, zero-rated company car tax). Oh, and it's one of very few cars you can drive in London without paying the Congestion Charge.

But are the official figures worth the paper they're written on? What's the E-Hybrid like in the real world? Does it truly live up to its eco credentials?

On one level, the E-Hybrid could be criticised for being cynical. Charging the car up via its battery port gives it a pure-electric range of just 22 miles (in reality less than this, depending on driving style and conditions).

That's a fair way below what most other plug-ins can do, and arguably simply a way to achieve a headline-grabbing, tax-efficient result in the official fuel test. And certainly many people's commute is longer than 22 miles.

So I tried a 30-mile commute into central London. What I found was that the Panamera started out in EV mode fine, even coping with motorway speeds on pure electric power. And after five miles, the computer was displaying an average of 148mpg — Woohoo!, thought I. But at this point, a mere nine miles of pure-electric range were left showing.

And as soon as I used that — in fact, pulling away sharply from the lights — the on-board 3.0-litre V6 petrol engine instantly kicked into life, and suddenly I was travelling back in time to dinosaur fossil power. Still, on my 30-mile commute I achieved an indicated 38.4mpg, with four miles of battery charge remaining. Not bad for such a big car, even though most luxury diesels will do at least as well.

Performance? Yes, it's quick — but you do feel every milligramme of its 2,170kg bulk, so the 0-62mph dash in 5.5 seconds subjectively feels rather longer. At least that is delivered smoothly and quietly.

With eight speeds, the Tiptronic gearbox has several different modes to choose from, including Sport and Sport Plus which hold the engine at high revs. The Tiptronic 'box is jerkier than Porsche's PDK system, though, and I found that reverse gear can take a while to engage.

Measuring a finger's width over five metres long, this is an unwieldy and awkward beast to see out of; better tick that reversing camera option. However, the handling really makes the car shrink. It corners with keenness, delivering massive grip and direct, responsive steering.

Yes, it understeers on turn-in, and the rear-end can be made to slide, but the PSM stability system quickly intervenes to sort it out. The ride comfort is also surprisingly good, and can be adjusted via the optional PDCC (Porsche Dynamic Chassis Control).

As with all Panameras the cabin is fabulous, with ultra-high quality trim, excellent seats and loads of gizmos to play with.

It's not exactly what you'd call a practical choice as its slender lines make it hard to get into, and by limousine standards space is tight; but then by sports car standards space is generous, so I guess it depends which angle you're coming from.

The fact that the battery pack sits under the floor definitely impacts on boot space, and with the optional Bose hi-fi subwoofer fluffing away in the boot, it's sub-supermini-sized. And here's a spotter's alert: you can easily tell a Panamera E-Hybrid by its pulsatingly lurid green brake callipers.

So, is the S E-Hybrid worth nearly Ł90K? There are other choices that offer stronger performance at this price, but very few that offer such a tax-efficient set of numbers. Which is where we came in: this is, I reckon, the perfect car for… accountants. — Chris Rees