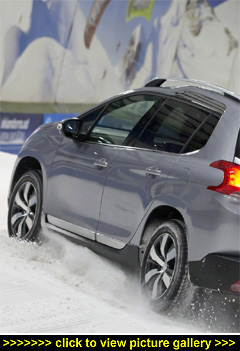 “Buyers in the supermini family
car market increasingly want easy-
performing multi-role vehicles.
Which is precisely what Peugeot’s
new entrant, the 2008 Crossover,
sets out to be...”

CLOSELY RELATED TO THE LARGER 3008, the slightly more compact 2008 Crossover is a natural development from the new 208 hatchback and a successor to the 207 SW estate series.

The five-door, five-seat 2008 Crossover sits between its stablemates in terms of overall size and carrying capacity and will hold between 360 and 1,194 litres, depending on how the quickly-flipped back seats are used and utilising some handy underfloor storage as well.

Under the bonnet you'll find one of Peugeot's familiar range of petrol and diesel engines, starting off with an 82bhp three-cylinder 1.2-litre petrol unit that's likely to prove to be the private buyer's first choice. There's also a 120bhp 1.6-litre petrol unit.

For now the diesel series includes a 68bhp 1.4-litre plus 92bhp and 115bhp 1.6-litre units, some with sequential six-speed automatic transmissions. Peugeot will be adding more powertrain choices over the coming months including a 99g/km 1.2 petrol with an auto 'box and Stop&Start.

Trim levels number four: Access+, Active, Allure and Feline. The range of optional equipment (and standard, depending on model) includes Peugeot's Grip Control that provides 4WD-like traction, a choice of consoles and interior lighting, and a parallel self-parking and extracting system. In all, eighteen models will gradually become available priced between Ł12,995 and Ł19,195.

In combination with the 2008's 16.5cm ground clearance, Peugeot's patented Grip Control provides (at the turn of a control on the central tunnel) all-year-round motoring practicality thanks to its ability to cope with mud, sand and snow.

As was very impressively demonstrated at the 2008's launch, held on the Tamworth indoor snow slope. It's not every summer's day you get the chance to charge up and down a snow-covered slope in a car. Just a few feet at the bottom of the Tamworth slope was all that was possible in a front-wheel drive 2008; but tackled in another, fitted with Grip Control, the result was amazingly different.

With total control, remarkable smoothness and silence, the Grip Control-equipped model (with standard-fit all-weather tyres) powered up the hill, turned at the top and, still under full control, descended back down without any loss of traction. Remember, this is not a dedicated 4x4 but a comfortable family 'holdall' — and one that's very easy to drive.

Back on the road, with not an icicle in sight, both the 82bhp 1.2-litre three-cylinder petrol and the 115bhp four-pot 1.6 e-HDi diesel proved very good all-rounders. On test the diesel delivered 58.7mpg; the busy but delightfully smooth little petrol pushed along at 42mpg (officially its combined figure is 57.6mpg).

You immediately appreciate the 2008's slightly higher riding position and the room in front and back is very good, the ride is smooth and the handling safe if not thrilling.

The modest power from the engines makes for reasonable progress, the steering and brakes are good although I found the three-cylinder's clutch pedal travel overly long — not an issue with the diesel.

While it faces some tough competition in the emerging new compact Crossover/SUV sector, Peugeot's new 2008 is one of the most comfortable Crossover cars now on the market. Classy and capable, with a comfortably smooth ride and relatively spacious interior, the impressive Grip Control feature and well-judged pricing, it will give the similar-sized Nissan Juke and Vauxhall Mokka ranges some serious competition. — Robin Roberts