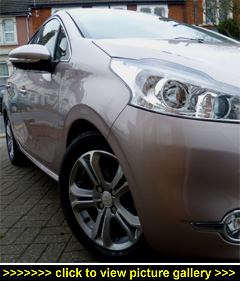 “Peugeot’s new 208 might be a
supermini but everything about
it shouts ‘premium’ car. And it’s
not just the look that impresses,
but the driving experience too...”

THE NEW 208 HAS INSTANT 'kerb appeal' — with distinctive headlight units cut deep into the bonnet and front wings, running lights that identify it immediately, and a smart nose fronted by a deep grille with subtle 'PEUGEOT' lettering on the top of its chrome surround, it's undeniably handsome.

Sculpted body sides give it an athletic look, made all the more effective by the lack of superfluous ornamentation — the only flourishes are the signature rear lamps with 'boomerang' effect LED lights set into the 208's rear shoulders. Smart but not showy.

Many are saying that this new 208 is the French car-maker's best supermini in years. And despite the quality, its prices are about what you'd have to pay for something similar but with less panache. And with that 'e' in some of the model names (e-HDi) no doubt you'll be expecting a 'green' side — well, you won't be disappointed.

Emissions are 98g/km — a nice start: no road tax for the first year or any other year. And real-life fuel consumption around the 60mpg mark. We've always found the smaller Peugeots to deliver on economy — we once saw 80+mpg driving several laps around the M25, and that was mixing it with the traffic not pootling along in the inside lane trying to conserve fuel.

Officially the 1.6 e-HDi we tested returns 74.3mpg (combined cycle), 62.8 (urban), and 83.1mpg extra-urban or, as most people still think of it, 'touring'. For the record we notched up quite a large proportion of urban miles during our week with the 208 (the Stop & Start, incidentally, cuts in and out seamlessly in stop-go traffic) so we were, and as will be most 208 customers, more than satisfied with our 57.2mpg test figure.

You might also think that the downside of all this greenness and economy would be lacklustre performance. Again you'd be wrong. The 92bhp 1.6 turbodiesel version under our bonnet was far from muted in its verve or in its response to a firm right foot during our seven nights and eight days with it.

It's a hearty engine — 169lb ft of torque on tap from 1,750rpm sees to that. It's also refined, notably so for a four-pot diesel. The benchmark 0-62mph time is punchy enough (10.9 seconds) while top speed is an illegal (in the UK!) 115mph. So just make sure you keep a watchful eye on that speedo… Seriously though, there's more than enough 'grunt' to keep this 208 moving along at a brisk pace whether you're having some solo fun or getting the kids to the theme park on time.

Keeping an eye on your dials is very easy in the new 208 because of its elevated slimline instrument panel — a defining feature of this very latest model in Peugeot's 2 Series dynasty. Unusually, the dials are viewed over the top of the small steering wheel. Don't worry about it because when you drive one you'll find it works perfectly.

The rest of the cabin is classy, well-trimmed, well put together (the doors shut with that quality 'thunk' first time, every time) and well specced. Highlights include a 7-inch iPad-like colour touchscreen (with intuitive operation) positioned prominently in the driver's eye-line and in easy reach, deeply bolstered sports seats that support your back as much as they hold your sides, and just the right amount of satin chrome highlights to brighten the ambience without dazzling the occupants.

Capping it all is a panoramic glass roof that makes the interior a really nice place to be, wherever you're seated. If you regularly ferry vampires around, don't worry — a pair of sliding sunblinds will stop them burning up in the sunlight.

And with five doors there's space for four and a driver. Even though this 208 is more compact on the outside than the 207 it supersedes, there's more room inside with those in the front enjoying a fistful of air between the tops of their heads and the roof; and lots more for their legs and shoulders. And enough in the back to ensure that rear passengers won't squabble about sitting next to the driver.

There's room, too, for luggage as well as versatility for those times you need to carry cargo and not company — drop the 2/3:1/3 split-fold rear seatbacks and lugging space goes up from 285 to a practical 1,076 litres. And although the seatbacks don't fold totally flat, the loadbay is easily accessed thanks to a high-opening tailgate. A through-hatch comes in handy not just for skis and snowboards but long flat-pack items from Ikea.

Back to that small diameter steering wheel. Unless you're buying a Ferrari 458, the 208's leather-rimmed wheel (multifunction, of course) is probably as small as they come. And there are sound reasons for it being the size it is — 13 inches from top to bottom and 14 inches side to side — and they're all to do with making the 208 lots of fun to drive.

And fun it is, too. You don't need to drive far or even that fast to appreciate the benefits of the sportingly small wheel — roundabouts could have been invented for the wieldy-wheeled 208: a flick of your wrists and you're exiting the other side with a grin.

Not only is it satisfying to twirl the wheel but, equally important, the 208's chassis delivers decent grip with an agility that shows up best when you're cutting through twisty sections of B-road. Brakes (ventilated discs front and rear) are well fettled, body roll is well controlled, visibility all-round for the driver is first class, and the excellent sports seats keep you firmly in place. Driver involvement that's better than most can be taken for granted.

For something that's good fun to drive spiritedly, the 208 manages to do a good job of keeping its driver and passenger well insulated from the rigours of rough roads and makes for quiet and relaxing cruising on motorways — where you can also make good use of the proper left-foot rest.

Standard safety kit includes height-adjustable front belts, automatic hazard light activation, an electronic stability programme, and Hill Assist with intelligent traction control, which takes the worry out of tricky hill starts as well as moving off on slippery surfaces. Although people never like to think about bad things happening, if they do it's better, and potentially live-saving, if you know who to call.

Which is why Peugeot's built-in Personal Connect SOS feature is so reassuring — should your Peugeot ever be involved in a serious accident (serious as in the airbags are triggered) then the system automatically contacts the appropriate emergency services and pinpoints your exact position so they can find you quickly. You can also trigger the SOS response manually if, for instance, you witness a serious accident and need to summon help.

This new 208 does fun as well as family, won't drink you out of house or home and can double-up as a mini estate when necessary. With prices from Ł9,995 for the three-door versions and Ł10,595 for the five-door models, it deserves your serious attention. Should it be on your supermini shortlist? Absolutely. — MotorBar