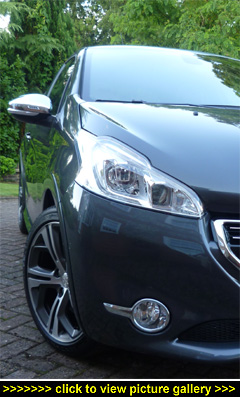 “A lot has been written about the
new 208 GTi having to be some kind
of knight in shining armour come
to restore Peugeot’s hot-hatch crown.
Forget the past; none of that truly
matters — the right, and only,
question is not how it compares to
previous GTi models, but how much
fun this new one is to drive...”

WHEREAS SIR LANCELOT had just a single 'horse power' to perform his shining deeds, the latest 208 GTi has 200 of them. All champing at the bit, ready to lunge forward at a spur from your right foot. Heart of the new GTi — one of Peugeot's hottest road cars, by the way — is an unleaded-swigging, turboed 1.6-litre four-pot that also pushes out 202lb ft of torque.

Drop the hammer hard on the throttle and the 208 GTi will rip up to 62mph in 6.8 seconds. Helped by a slick and accurate gearchange action, it's a gutsy performer eager to deliver mid-range thrust but that's more than happy, as it slices onward and upward through the six close-ratio gears, to break the limits — on the rev-counter, of course.

At the top-end is where you'll hear the 208 GTi's call of the wild — at lesser revs its twin tailpipes are, for the breed, unusually reticent. Hardcore hot-hatch drivers might initially bemoan the lack of exhaust noise until the upside dawns: that when you do pile on the revs you won't attract the attention of the 'wrong' people! And if you don't specify the de rigueur red livery, they won't see you either…

Unlike GTis of yesteryear, who announced themselves by way of tea-tray spoilers big enough to moonlight as sushi bars, the 208 GTi, based on the three-door 208 supermini, is a far more restrained animal.

Get closer though and you'll be able to spot the finer cues and clues to the GTi's sporty persona: 3D-look chequered pattern to the forward-thrusting grille underscored by a red bead, unique 17-inch alloys shod with 205/45 Michelin rubber nestling inside the wheelarches, red brake callipers, side skirts, cool 'GTi' badging finishing off the chrome trim strip defining the lower window edge of the back rear side windows with a flourish and, at the tail, a neatly integrated roof spoiler and trapezoid chromed double tailpipe. Short overhangs give it a wieldy look to go with its wieldy character.

Traditionally hot-hatches have been for the 'hard' lads who like a bit of crash, bang, wallop from their machines (not to mention some snap, crackle and pop from their exhausts). In the 208 GTi they will have to be reprogrammed to look on the lighter side of life because this new GTi comes with a non-erasable feature known as 'refinement'. Sorry guys, your ladies are going to love this one!

Essentially a well finished, higher grade version of the new 208's contemporary cabin, but given a meaningful sporty makeover, the 208 GTi's cockpit is a good place to be. Not least because of the superbly grippy sports seats that you sit in (and not on) and which keep you in place when you're flinging the GTi around (and even when you're not). And, it goes without saying, they're comfortable and supportive too thanks to being high off the floor with long seat bases that provide good under-knee support. Oh, and the driver and front passenger — even bulky six-footers — enjoy good headroom as well as plenty of leg- and knee-room thanks to the large footwells.

Those seated in the back will be pleased to know that the front seats slide and fold smoothly for easy rear entry and exit; and return unfailingly to their original positions — which also keeps those using the front seats happy. Unexpectedly, three grown-ups can sit side-by-side in the back — pretty comfortably, too.

The smart dials (with teardrop-shaped bezels featuring red perimeter lighting) are viewed by looking over — not under — the upper rim of the wheel. Admittedly strange at first, once you've tried it there's no going back. It also makes for very good visibility of the road ahead for the driver. In fact, helped by large glass areas, all-round visibility is excellent whether you're behind the wheel or just along for the ride.

Instruments are easily read, and there's a clear digital speed readout in the driver's display between the main dials; the same screen can also show navigation information and all the usual trip data including range-to-empty.

The fascia is smart, modern and puts everything the driver needs in reach or in view. A tasteful mix of trim materials including traditional chrome, satin chrome and high-gloss black enhance the ambience. Plus there's ample room to stow all the paraphernalia that 21st century man (and woman) apparently need to stay wired and get through the day.

Setting the tone throughout is a multitude of red detailing that colours a variety of cabin items from the seatbelts to the gearknob to the fascia. In neat contrast, look up and you'll see blue mood lighting along both sides of the panoramic glass roof.

Also worthy of mention is the large 7-inch touchscreen, perfectly positioned top-centre of the fascia, for the infotainment and navigation. The menus and features are accessed easily and it works like your everyday smart phone or tablet — flick your fingers over the screen to scroll through a list or move the 3D map. It only has three buttons: volume, mode and menu — a child can work it without reading the instruction book.

Finally, travelling in the 208 GTi is never a hardship: refinement is a core feature and the cabin is quiet at fast motorway speeds on the Continent where you can legally cruise at close to 100mph.

On British motorways pick-up is crisp at the legal limit, even in sixth gear — unusual for an emissions-friendly engine. On B-roads it will eagerly punch up long steep hills in third without raising a sweat.

In an age of proliferating 'tyre repair kits' instead of a proper spare, it's well done Peugeot for not skimping — a real-world, full-size matching spare alloy wheel sleeps under the GTi's boot floor. The rear seatbacks are split 60:40 and flop down easily to increase space from its very usable 'seats up' 285 litres. They don't fold totally flat; but flat enough to make the intrusion-free, regular-shaped loadbay practical and accommodating. The boot cover-cum-rear parcel shelf is light and can be removed and stowed quickly.

Refined it may be but that's not to say that, handling-wise, the 208 GTi isn't sharp and agile — almost from the off of your first drive you can feel that it wants to play. This new chassis is supple, and there's no fighting torque steer as you squirt the GTi through tight corners.

In fact the GTi has a keen appetite for roller-coaster roads where you can really sling it about without fear. To that end you'll also like the quick, variable electric power-steering; it's usefully light in town but weights-up at speed. The GTi's front wheels obey the helm, and the GTi's chassis obeys the steering's lead and follows faithfully. In fact it's very much like a good mate: it can party with you; entertain you — but it also knows how to take some time out when you're not in the mood.

Naturally the standard 208's spring and damper settings have been fettled to bring them up to sure-footed GTi-spec, with 8mm chopped from the ride height and wider tracks front and rear. The GTi is stable, whether you're travelling at speed or decelerating under hard braking. The brakes are strong — a tad sharp at the top-end on first acquaintance; but they bite good and hard.

Ride-wise it proved to be a comfortable steer, taking varying road surfaces in its stride and skimming over speed humps and potholes without losing its line — or loosening your teeth.

Did we mention the fuel consumption? I don't believe we did. Well, officially it's 34.4mpg urban, 47.9 combined and 60.1mpg extra-urban.

You may laugh at 60mpg from a hot-hatch but before you laugh too loudly take note that over 700 quick test miles our GTi averaged 42.1mpg — pretty close to the official 47.9. On long trips when you're not going pedal to the metal, you might get close to 60mpg. But would your mates ever believe you?

A forward-looking GTi that keen drivers can look forward to driving. Like the proverbial but hard-to-find 'best mate', it's reliable, honest and trustworthy but it can also do fun. Ask it to go out on a jolly with you and it's more than up for it. Exactly what mates are for. Nice one, Peugeot! — MotorBar