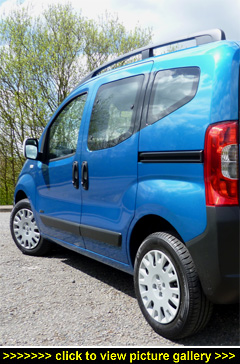 “Have you ever wondered just how
all those amazing millinery master-
pieces make it intact to Royal Ascot
on Ladies Day? Actually it’s been
a very closely guarded secret — up
until now...”

PRESTIGE CAR-MAKERS such as Maserati and Audi have long supported major red carpet events such as the Academy Awards, the Baftas, etc, providing their range-topping 'halo' models for the VIPs and A-list celebrities. In return they're guaranteed plenty of coverage in the international media. But there are others who prefer to operate in the shadows.

In fact, at this very moment, there's a startling rumour going around that every June a secret fleet of Peugeot Bipper Tepee Style models are called up to ferry the amazing hats (with their wearers attached) to Royal Ascot. Officially, all enquiries about this are met with a curt 'no comment'. But there is a smoking gun — the Bipper Tepee Style itself.

This cheeky-looking compact people carrier is pre-eminently qualified for the job, courtesy of its extremely generous headroom (could this explain the 'Tepee' part of its name?) and a pair of sliding rear side doors that make entry and exit an elegant affair whatever it is that you have perched on your head.

While it doesn't, obviously, have the visual 'wow' of a Maserati, the Bipper's not unattractive; more a cheeky-cum-quirky little number. Our test model, resplendent in stand-out metallic light blue livery, looked pretty smart for what some people would delight in pointing out is a van-based MPV. Nothing wrong with that — some of the very best and most luxurious MPVs have family roots buried in 'trade'.

In profile the Bipper Tepee's jutting jaw is what you notice first — you're hardly aware of it on Bippers painted black, but on our light coloured Bipper the black front grille section really stands out. Offsetting it though is the rising, almost triangular rear door and third side window styling that gives the Bipper a very distinctive air and banishes any thoughts of 'a van with windows'.

The windows in the sliding doors are side-hinged at the front. Actually not a problem as the ample amount of air that enters when they're open isn't accompanied by any turbulence, so rear passengers can arrive at their destination with every hair — and hat — neatly in place.

Shorter than some superminis at just under four metres from bow to stern, the Bipper is compact enough to physically fit in just about anywhere — in fact, thanks to good visibility, easily-judged boxy 'corners' and light steering, it can be slotted into most gaps without effort.

Inside, however, the Bipper is without doubt a car and not a van. The dash is tidily laid out with all the important stuff — AirCon and audio — high up and easy to operate on the move with minimal distraction. Dials are clear, as too is the driver's information display between them (good to see that range-to-empty, average mpg and the external temperature are all included on the menu).

Also set conveniently high is the standard five-speed manual gearbox's 'stick'. You'll also find plenty of in-cabin cubbies including a handy open bin in the fascia top, a large and deep lockable glovebox, long door pockets with can/bottle holders, and a glasses case above the driver's door. Fit and finish is fine, and the trim materials look tough enough to survive growing children. Adding a sparkle to the cabin are the painted (in matching body colour) door cappings.

The front seats are well-padded and comfortable. Outer armrests are on the doors, and the driver gets a drop-down armrest for his, or her, gearchanging arm along with adjustable lumbar support. The driving position is commanding, with uninterrupted views through the big screen and to the sides, and even to the rear, making placing and driving the Bipper in traffic a relaxing business. The power steering also takes the strain of city driving and ensures parking manoeuvres are light.

Light of a different kind fills the cabin; front and back alike. The sliding rear doors provide superb access to the rear seats, which are split 2/3:1/3. A major advantage of them over traditional car doors is their undisputed benefit in tight parking spaces.

Plus you won't have to worry about younger members of your tribe banging other people's car doors when you're parked up. Good, too, is that they're light enough for children to use without help; and they stay open until they're pulled shut.

Sit in the back seats and you are higher (but still with plenty of headroom) than those in front, and can enjoy clear views out. More good news is that there's room to spare for two real-world adults in the back, and those in front don't have to give up any of their legroom to accommodate them.

A third adult can be fitted in on the middle seat and there's good foot room for them too. The centre rear belt is integrated into the seat so no dangly bits to watch out for; the two outer belts are well sited and stay out of the way when folding or returning the rear seats. Whatever the 'cargo' of the day — bodies, bags or building blocks — the sliding side doors help make light work of loading and unloading.

Kit is fit for purpose: AirCon with a pollen filter, radio/CD, one-touch front electric windows (the rear windows open an inch or so outward at the trailing edge), electric heated door mirrors that fold in tight to the bodywork for 'no worries' on-road parking, power steering, remote central locking, ESP stability control, driver, passenger and side airbags, roof bars, and front fog lights. Plus there are fitted mats covering the easily-washable floor.

The Bipper's boot and loadbay are strong on both practicality and versatility: the basic boot is pretty accommodating, swallowing 356 litres; fold the split rear seatbacks and this rises to 737 litres. But there's still two more stages to go: first, tumbling the folded rear seats frees up even more room — for a new total of 884 litres.

Finally, if you remove both rear seats you'll have 2.5 cubic metres of space — in litres that's a whopping 2,500. For the record, a full-size spare wheel lives under the boot floor (externally) and can be removed even with the boot full. Another thoughtful touch is the portable rechargeable torch that's part of the boot light. Neat.

The top-hinged tailgate is large enough to provide good shelter in downpours; and despite its size, it lifts up and opens with minimal effort. The full glass area of the rear screen is heated, and there's an effective wash/wipe.

Factor in the totally flat loadbay floor, high roof, and low loading sill that together make transporting large items totally doable, and who needs a van. Families, dog owners, DIYers, even disabled drivers who need a wheelchair — all their needs can easily be catered for. If you need to transport more, the Bipper can tow a braked trailer of up to 1,000kg (or 400kg unbraked).

The four-cylinder turbodiesel comes mated to a five-speed manual gearbox — or, for an extra Ł900, you can have a two-pedal transmission with Stop/Start that knocks the emissions from the manual's 119g/km down to 107g/km while at the same time boosting fuel economy from the manual's combined cycle 62.8mpg to 68.9mpg.

During our 500-mile test we drove, at various times, fully laden and solo, in rush-hour town traffic, along winding B-roads and arrow-straight motorways — and averaged 55.5mpg. We'd expect most Bipper drivers to at least match that. Worth noting too, the manual 'box version is road tax exempt for the first year; after that you'll have to find Ł30 annually. So, running costs will be low.

The big surprise for many will be how driveable the Bipper is. Accepting that it's no hot hatch, it's game — the steering is accurate; it hangs on when you chuck it about and you can have fun bombing around. Sure you need to make full use of the revs and the gears (it's an easy changer), but it will more than hold its own in traffic. Cruising along motorways it quietens down and covers distances in a relaxing manner. It also proved to be reassuringly stable when fully laden at speed.

The ride is generally composed and we heard no complaints from those travelling in the back — it's usually them who feel the worst of a car's suspension. All-in-all, a likeable multi-purpose machine that's easy to live with on a daily basis.

So should you chance to see a Bipper with blacked-out back windows and a guy with a peaked cap at the wheel towards the end of June driving towards Ascot, then look away. Quickly. We all know what happens to whistleblowers in this country. Of course, on the basis of what's good for the goose is also good for the gander, you could pop along to your local Peugeot dealer and try one on for size. Wear your biggest hat! — MotorBar