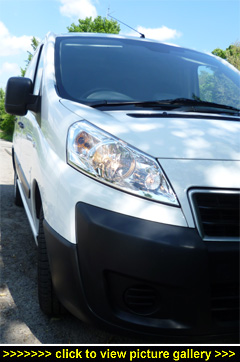 “Direct Line for Business has just
revealed that Britain’s builders,
plumbers, electricians and other
tradespeople are living out of their
vans: using them as mobile offices
from where they manage their
business, take tea-breaks, and play
computer games (some are even
kitted out with Xboxes and PS3s) —
and one in ten admit to using their
van as a bedroom!”

PEUGEOT'S EXPERT RANGE of vans could make the ideal home-from-home for busy tradespeople who can't spare the time to return to base every night. Three body styles are available — the traditional panel van, a window van and a crew van. As their names imply, the panel van is mostly for carrying cargo, the window model more MPV-ish, and the crew version designed for up to six workmates and their equipment.

While we don't usually review vans, given the state of the property market we thought we'd look into this new trend. Furthermore, active lifestyle SUV customers who need to carry a great deal of bulky outdoor and sporting equipment might also consider an all-singing, all-dancing dual-usage van with all-terrain capabilities.

One 'phone call later it's sorted, and an Expert panel van is delivered to our door. It's finished in gleaming white paintwork with a very car-like nose. For the record, you don't have to be a 'white' van man — you could also have an Expert in blue, red, or black; or even aluminium or iron grey metallic.

Vans have come on a bit looks-wise in recent years and this new, sharp-nosed Expert model is surprisingly nifty looking. Inside, the cabin architecture could have come right out of a passenger car — it's well trimmed, spacious and very liveable. The seats come in a 1+2 format which works well: left of the driver is a two-person bench with enough shape and centre bolstering to keep two nicely separated.

It's also extremely practical — cars generally seem to carry either a lone driver or a driver and two passengers. In an Expert all three can travel in the front and chat agreeably instead of the one in the back feeling as if they've been touched by the plague. And if you're doing the school run, it's a great way to limit the damage to two instead of four hyper kids!

The cloth seat-facings are cool in summer and warm in winter; the manual AirCon belts out plenty of hot air and, especially welcome in the sticky summers that now seem a fixture as established as cricket in the UK's calendar, plenty of chilled when it will do the most good. The large, lockable glovebox is also air-conditioned — something you still won't find in every car. Something else you won't find in a car either is the Expert's convenient full-width overhead storage compartment that's handy for carrying all sorts of things.

The lightly bolstered seats come with decent lumbar support built-in and are set high off the floor, which is not only good news for legs on long journeys but also contributes to the excellent front and side visibility from the driving seat. An added bonus: Range Rover and other big 4x4s lose their imperious air when seen from the Expert's commanding driver's seat. It also makes it a piece of cake to accurately place the 4.8-metre-long Expert on the road.

Getting behind the wheel, if you're not a regular van driver, is a bit of a shock as the first thing you miss is a rear-view mirror. With a separate cargo bay behind the full steel bulkhead and unglazed all-metal rear doors, there's not much point. Fortunately the large door mirrors give a pretty good view as to what, or who, is following you.

Other cabin plusses include masses of headroom (a good six inches for an average adult male), plenty of adjustment for reach and height of the three-spoke steering wheel, a height-adjustable driver's seat along with height-adjustable seatbelts. One-shot up/down electric windows, power-adjustable door mirrors, drive-away auto locking, tinted glass and a radio/CD all help make the cabin more car-like.

The instrument pack is straightforward with clear dials and foolproof column stalks that also operate the cruise control and speed limiter (which doesn't let you go above your pre-set speed). The on-board computer shows all the essential driving data such as range, mpg and external temperature. Other useful features include a storage tray under the passenger's seat and independent door locking for the cab and/or the loadbay's four big doors.

The 2.0-litre turbodiesel under the bonnet of our test car pumped out 128bhp backed up by 236lb ft of torque. It's a gutsy engine and you don't need to wind it up to make good progress. The nice part is that the gearchange action is smooth through the gate and it's all made even easier by the gearlever being sited high-up and close to your left hand.

Getting to the benchmark 62mph takes 12.8 seconds and it maxes out at 99mph. It's happy to cruise all day at the legal limit or higher, and pick-up in sixth gear is fine if you need to overtake on motorways or dual-carriageways.

Officially this 128bhp Expert should average 44.1mpg (around the houses it's 37.1 and cruising the open road as much as 48.7mpg). We put our Expert to good use, transferring a lot of our 'stuff' from one store to another. Consequently our week's 500+ test miles were mostly spent heavily laden with plenty of quick motorway miles — but we still saw an average of 40.8mpg. Pretty close to the official 44.1. And pretty good!

A seriously worthwhile new feature of the latest Expert is its Grip Control system. Intended to keep you moving when the weather turns seriously bad, it's controlled by the driver using a rotary dial. Four driving modes are available: mud; sand; snow; and regular ESP. Expert models equipped with this all-terrain feature also get upgraded M&S (not Marks & Sparks but Mud-and-Snow) tyres, raised suspension, and an under-engine protection tray.

Of course, the main reason you'd be looking at one of these is for its cargo carrying abilities. Cars measure their boot capacity in litres; vans do it 'big-boy' style in cubic metres, of which the Expert has five. Probably easier to grasp if you imagine a box seven feet long by five feet wide and fifty inches high — that's the Expert's loadbay. It's no wonder people are living in them!

Into which you can pack a payload weighing 1,004kg. Getting it in is easy: there's a sliding rear door either side (unglazed, so unlike an MPV or SUV, nobody can look in to see what you're carrying and whether it's worth stealing) plus a pair of side-hinged, unglazed all-metal rear doors that open to 180 degrees. The cargo deck is at knee-height and, more helpfully, the easy open/close sliding doors hold their open position even on hills.

Should you ever need it, you'll find a full-size spare beneath the boot floor — it's accessed externally. Finally, one life-extending option definitely worth shelling out for is the loadbay 'side protection' that sees the cargo bay and floor lined with hard-wearing, sweet-smelling ply. Nearly forgot — the Expert will tow 2,000kg with a braked trailer.

Actually it was very lucky that we were testing the Expert the week we did because whilst driving along a dangerous, fast and busy country road, Maggie (one of our very experienced test drivers) came round a bend to find a large, spooked Rottweiler running loose in the road ahead of her. Fortunately she was able to stop and, thanks to the big side doors and some help from a kindly driver coming the other way, get the dog into the cargo bay before he got knocked down. A quick trip to the local vet's for a chip-check saw 'Rottie' looking forward to better days.

Which brings us to the Expert's handling and ride characteristics. As Rottie proved, it brakes fluently and strongly. Plus it steers well, rides smoothly, is easy to place and holds its line through bends, can get along at a fair lick and is quiet at speed. It also drives as pleasantly as a car, particularly in city traffic where you benefit from the high-seating and uninterrupted visibility. Now, about that bedroom conversion… — MotorBar

Find out more about Direct Line for Business products or get a quote by calling 0845 301 4827 or visiting directline.com