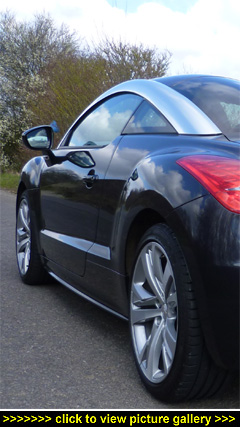 “Something special this way comes
— still a fairly rare sight, Peugeot’s
sports coupe, the RCZ, is now even
more vivacious thanks to a subtle
re-style by its original designer that
incorporates the French Lion brand’s
latest design codes...”

WHEREAS SOME SPORTS COUPES try to mislead you into thinking they're full-time four-seaters, the dynamic looking RCZ is entirely honest about its compact 2+2 abilities — just one look at its ooh-la-la! double-bubble glass roof tells you all you need to know about the RCZ's capacity to entertain more than two.

A good thing really, because by its very nature the RCZ tends to make its owner rather selfish — this is a car with a captivating personality that, deep down, you want to keep all to yourself. If you're feeling magnanimous you might take along just one significant other to share the ride…

Those unacquainted with the RCZ should be quickly forgiven for thinking that its powerplant might sit amidships. Yes, the rear deck combined with the symmetry of the 'step-down' between the side door and the rear wing does give that impression; but no, its engine is in the traditional place ahead of the driver. And what goes under the bonnet can be either petrol- or diesel-fuelled.

Equally likeable is the turbodiesel's fuel consumption — officially 53.2mpg, our test average came out at a plastic-friendly 43.2mpg. A gear shift indicator is fitted for when your mood is frugal rather than frisky — it's not a nag, so not a problem.

Regular visitors to MotorBar will be aware that, when it comes to fuel economy, we like to bring out the worst in our cars — 'normal' RCZ drivers should fare far better and will have a seriously good chance of breaking through into 50mpg territory.

You get six gears in the manual 'box that comes as standard with the turboed HDi unit. And it makes an easy-going companion whatever your mood — if you want to cruise around, then that's just fine; if you want to get those muscular haunches squatting down, then use the pleasingly precise gearlever to stir it into action — not hard as it's more than willing to rev.

And when it does, you'll hear confirmation from the two large chromed tailpipes. At fast speeds that are only legal on some European motorways, the 2.0-litre four-pot zips along at 95mph with barely a murmur, confirming its right to wear a GT badge.

While it's got style in spades, how does the RCZ fare in the handling stakes? The suspension is a tad on the firm side but that ensures the RCZ knows its place on the road; and sticks to it — not hard thanks to the wide, grippy 235/40 Continental Conti Sport Contact 3 rubber wrapped around its strikingly intricate 19-inch alloy wheels. Punt it through a corner and it stays reassuringly faithful with minimal body roll — naturally there's an electronic stability programme and traction control safety net but it won't cut short your enjoyment.

The brakes are excellent: you get reassuring bite and progressive stopping; smooth deceleration at speed all the way down to an imperceptible dead stop. The electro-hydraulic steering is sharp enough to keep up with the chassis, while in town the weighting is light enough for easy parking.

So does that 'a tad on the firm side' really mean a jolting ride? Absolutely not. In fact, the RCZ's ride is a well-considered balance between handling and comfort — enough of the former to let you press on confidently while enough of the latter to stop your body tensing up every time you spot a pothole ahead.

The agreeably-bolstered, heated front sports seats provide ample support where it's needed so you'll still be sitting comfortably even after two or three hours.

We didn't finish telling you about the new cosmetic changes to the RCZ mentioned at the beginning of this review; to recap — the facelift is just that and no more than that. Nothing mechanical under the skin has changed and, in essence, it's just a nose job — and a very good one at that.

Fronting the wide aluminium bonnet and feline-looking headlamp units is a slim grille accentuated by a lower air intake stretching between signature lights that are visible both day and night.

The RCZ's tail spoiler is equally aerodynamically effective and an integral part of the design — not fixed but active and automatically deployed in one of two positions depending on your road speed: for the record it opens to 17 degrees at 53mph, then moves to its second, more stand-out position (34 degrees) at speeds in excess of 96mph. Pressing the button on the centre console moves it straight to the 34-degree high-speed position — a nice touch for drivers whose egos crave a little aerodynamic boost!

The RCZ's cabin hasn't sacrificed comfort for perceived sportiness — it's wide enough to fit in a pair of big, comfortable sports seats while still leaving plenty of room in all directions for those fortunate enough to be sitting in one of them.

The driver is pampered with a mood-setting, flat-bottomed steering wheel — its meaty rim is wrapped in good-to-grip perforated leather; its spokes house multifunction controls for just about everything important. Complementing it is a short-throw, stubby gearlever with an accurate and fluent shift action that makes it as satisfying to use when you're mired in city traffic as it is on challenging B-roads.

Fit and finish is A1, as are the trim materials — the GT's fascia and centre stack is covered in leather. Smart too is the SatNav screen: not only does it display maps in easy-to-follow 3D but it tilts to minimise glare on sunny days. More carmakers should follow Peugeot on this. If you already know the way, you can fold it back into the dash.

The wraparound seats feature one-piece built-in headrests and are, as you'd expect, power-operated (with a two-setting memory on the driver's side) and, along with plenty of reach and rake adjustment for the wheel, and pedals that are directly ahead of the driver, it's very easy to set a fine driving position.

Crucially, the RCZ offers its pilot first class all-round visibility (it really is excellent rearwards). Long side windows help, as too do the shapely door mirrors which also provide good views. They're also power operated and powerfold on demand as well as on locking 'n' leaving.

Framed by striking-looking flowing roof rails, the double-bubble roof and rear windscreen are a defining feature of the 2+2 RCZ. While there's loads of headroom for the front pair, the strongly contoured rear seats are really best for youngsters and shopping overspill — kids, of course, will fight for the right to ride back there!

Speaking of which, with the rear seatbacks upright the boot offers a very usable 384 litres, supplemented by an extra under-boot 30 litres for oddments (and as sure as death and taxes there will always be 'oddments'). Double or quits? Fold the seatbacks down and you'll get a 760-litre loadbay. Given its sculpted, two-door coupe bodywork, that's pretty good.

Few cars, even wildly expensive ones, provoke as much head-turning as the RCZ. It's swift and genuinely enjoyable to drive, very comfortable, and makes a polished grand tourer; all essential attributes and all wrapped up in a body that has style in spades. No surprise then that you can get almost as much pleasure from just looking at it as you will get from actually driving it! — MotorBar