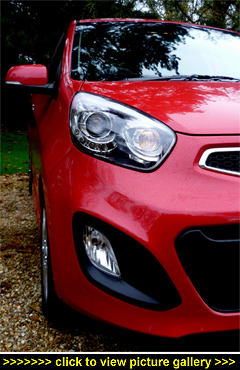 “It’s not just the super-rich who
dislike paying taxes. Think of the
poor motorist on a tight budget.
Given the ever-rising costs of
running a car, particularly if you’re
not a ‘company man’, you’d be
daft to pay more road tax than you
need to...”

IF YOUR CAR SIZE IS SHRINKING along with your motoring budget, driving a small car needn't be the culture shock you might be dreading. In fact, once downsized, many motorists never want to go back. Small cars have come a long way in a short time and there are plenty of benefits on top of the delicious feeling you get when you don't have to pay the government for driving on the roads you've already paid for in London or elsewhere in the UK.

Kia's compact Picanto city car is a fine example of 'Who needs Big?' With a CO2 figure of just 100g/km you'll never have to hand over a penny in road tax. Officially the combined fuel economy is 65.7mpg — a week of pretty hard driving in our hands saw an overall real-world average of 55.1mpg. Few owners will fail to match that; even fewer would complain about it.

For additional peace of mind you won't find a better warranty that Kia's — it's still the best in the business and covers you (even if you're not the first owner) for seven years or 100,000 miles on all non-wear and tear parts including labour. And if you opt for Kia's Care-3 package then the first three services (required every 10,000 miles or once a year) are at low fixed prices with all labour and routine replacement parts and fluids included.

But do all these financial benefits come at the cost of a performance penalty? The short answer is a resounding No. Powering the Picanto is a 1.25 four-pot petrol engine (there's a smaller and even more economical (67.3mpg) 998cc three-cylinder engine choice but the 1.25 is the one to go for, particularly if you're not restricting your driving to inside the city limits.

The noticeably more pokey 1.25-litre engine comes in three guises: with a five-speed manual gearbox; with a four-speed torque converter automatic transmission; and an EcoDynamics model that incorporates Kia's smooth-working Intelligent Stop & Go stop-start system that ekes out the fuel in traffic (65.7mpg with 100g/km of CO2).

Our 1.25-litre Picanto was a top trim level ('4') spec with the stop-start system and a five-speed 'stick' shift and this version will run all the way to a 106mph and accelerate from zero to 60mph in a 11 seconds.

In and around town its eager, revvy nature — aided and abetted by a crisp and easy gearchange action along with 84bhp and 89lb ft of torque — makes it well able to tackle the cut-and-thrust of edgy 'no-prisoner' traffic. Not only that, the four-pot bowls along motorways and there's even enough 'go' to tow a braked 700kg!

It's much easier for designers to endow big cars with flowing lines and street presence but Kia have made the compact Picanto stand out — fronted by the brand's now well-known 'tiger-nose' grille and swept-back headlamps with sharp white daytime running lights there's no danger of wondering where you left it parked. Strongly sculpted flanks over wide-set alloys end at the arrowhead-shaped LED rear lights that define its cheeky tail.

Getting in and out through the Picanto's large door openings, even in supermarket car parks, is hassle-free. Once inside, the cabin feels unexpectedly spacious and airy. Fit and finish is thorough and the fascia smartly contemporary. Unusually, the steering wheel has but two spokes — both horizontal — and they're home to multifunction controls ('phone, voice, and audio). A grippy quality leather rim finishes it off rather nicely.

While the wheel only adjusts for rake it's not an issue because seat adjustment is more than adequate. In fact, Kia have made a lot of space in the 3.6-metre long Picanto. The cloth-trimmed 'chairs' are supportive and keep you comfortable (particularly your shoulders and upper back) and there's a fist of headroom.

The windows are deep and from the driver's seat visibility all-round is A1 courtesy of the spot-on driving position. Everything a driver needs to know is shown in the three clear white-on-black Siamesed dials.

AirCon and hi-fi controls are all easily to hand on the centre stack, made better by good-sized, easy-to-use buttons. The door pockets and glovebox are big enough to be really useful, plus under the front passenger seat is a slide-out A4-sized storage tray that's perfect for private stuff. There are plenty of compartments and cubbyholes around, plus a decent sized glovebox and twin cupholders.

Back seat passengers also enjoy several inches of air between their heads and the roof. Usable outer armrests add to their comfort and there's ample room for feet so they'll be far more comfortable travelling in the back of a five-door Picanto than in a number of its rivals — a near-six-foot adult can sit happily behind another in the front. Three headrests and three belts are provided and three can travel side-by-side on the comfy rear bench — the one in the middle enjoys the same amount of headroom as his or her outer companions. Something all aboard can enjoy is the well-insulated cabin — it makes long motorway trips quiet and relaxing.

Kia have earned themselves a well-deserved rep for not holding back when it comes to providing kit. The top-spec Picanto (designated a '4' in Kia's self-explanatory trim hierarchy — it runs logically from '1' through '4') should satisfy even downsizers from larger cars.

The easy-to-place Picanto always feels light and wieldy courtesy of its willing engine, tight turning circle (it goes without saying that parking is a doddle) and decent grip plus, of course, the all-seeing behind-the-wheel experience.

When it comes to slowing as opposed to accelerating the all-disc brakes are strong and reassuring (the Picanto's 41-metre stopping distance from 62mph is up there with the class best).

The Achilles' heel of many small cars is motorway driving, a place where they often feel very much out of their environment. Not so the 1.25 Picanto — even at speed on major roads it always feels stable and safely planted and long trips can be undertaken with no worries by this mini mile-eater.

And while it may be Kia's smallest car that hasn't prevented them making a well-judged call when it comes to the ride/handling equation — it not only drives well but it rides well too, both in speed-hump-infested towns and on the less restricted and less restrictive open roads. It's a combination that makes the Picanto refreshing to drive whenever you're feeling frolicsome.

Easily loaded through a wide rear hatch that almost lifts itself, the boot, at 200 litres, is decently sized for this class of car. A good shape too, it's easily enlarged to a flat-floored 870 litres by tumbling the rear seat bases forward then dropping down the backrests. Worth noting is that both the seat bases and backrests are split 60:40 (most rivals' only give you split backrests) which mans you can use either side for cargo and still carry a single rear passenger.

The rear side doors also provide extra access when using the loadbay maxed out for cargo. Removing and storing the Picanto's rear parcel shelf-cum-luggage cover on the boot floor can be done in seconds and, 'just in case', beneath the floor you'll find a tyre mobility kit.

The Picanto's biggest strength is not its commendable 55mpg in real-life driving conditions; not even its impressive 'big car' kit list — it is its knack of never making you feel as though you're driving a 'small' car. Throw in Kia's confidence-inspiring seven-year warranty and there's no doubt that the Picanto is a 'best buy'. — MotorBar