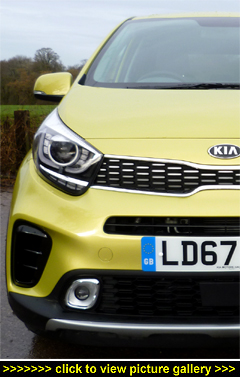 “Most city cars do exactly that:
live in the city. That’s why they’re
one size down from traditional
superminis. But not all city cars
are created equal and a few,
like Kia’s all-new Picanto, enjoy
a double life both in and outside
the metropolis...”

WHAT THEY ALL STRIVE TO OFFER is an alluring mix of smart looks, clever interior packaging, comfort, and economy — and an attractive price. While city car customers appreciate compact dimensions, many have been bitten by the crossover bug — but unless you have ring-fenced parking then an SUV in town has become something of a liability. Enter, stage right, with a city-friendly 3.7-metre footprint, the Picanto X-Line.

The X-Line is 70mm longer, 30mm wider and 15mm taller (down to the 15mm extra ground clearance) than its stablemates. It also sports a more assertive look with imposing SUV-style bumpers, black side sill mouldings and wheelarch cladding, and silver skid plates nose and tail. So city drivers can now have their cake and drive it.

With prices kicking-off from Ł9,500 and topping-out at Ł13,995, putting a Picanto on your driveway (or your allocated parking spot) won't play havoc with your budget. All Picantos come with five doors and there's a choice of five-speed manual or four-speed automatic gearboxes mated to a petrol engine that can be either a three-pot 66bhp 1.0-litre or a 1.25 four-pot with 83bhp — the logical choice for both in-town and open-road driving.

If that's not enough you might want to make a note that Kia's turboed 1.0-litre T-GDi petrol engine with 99bhp will be joining the powertrain line-up later in 2018.

The 1.25 is keen to show you how it goes; clean-revving, its 90lb ft of torque provides decent 'pull' through the front wheels. Obviously we're not talking hot-hatch levels of poke here so if you want to zip rather than flow you'll need to make best use of the five gears — never a problem as the change action is clear-cut.

Keep it in its sweet spot and passing traffic, even in the outer lane of the motorway, holds no worries. For the record, at the legal limit the 1.25 four-pot is hushed enough to make it quieter than some of the premium German models that now compete in this sector of the market.

While the four-cylinder unit is gutsy, it's no gas-guzzler — officially rated at 61.4mpg, at the end of a hard week's testing it had averaged a worthy 46.5mpg. In the real world, fuel-savvy drivers should be able to regularly slip across the 50mpg border into more smiley economy territory.

Liberated from the camel-backed 20mph zones, the Picanto feels more at ease than many so-called city cars. In fact, it feels as enthusiastic as children unexpectedly let out of school early — racing off through the twisties with well-managed body control. The same accurate power-assisted rack and pinion steering that makes nipping through town traffic and slotting into only-just-big-enough parking spaces a breeze, is also fine punting along on country lanes. And all the time, working in the background to enhance stability and keep cornering lines tight and true, is torque vectoring — a first for Kia in the city car class.

On faster roads the Picanto rides well but even playing on its home turf — blacktop — it proves to be compliant enough in spite of rolling on the larger 16-inch alloys that are standard-fit on X-Line models.

The cabin has a modish air enhanced by high gloss white trim to the door pulls, gearlever surround, armrests, and around the eye-catchingly detailed vertical air-vents, and a high gloss black frame edging the touchscreen along with unique two-tone grey faux leather upholstery with yellow overstitching.

It's all well designed and well put together with controls and switchgear logically sited and easy to reach and operate — exactly how you want it when driving in the distracting conditions that define today's ever more congested roads.

The natty grey seats are comfortable not just around the houses but on long trips too, and while their bolstering is slim it does actually offer enough support to keep you steady through bends and corners (as well as making it easy to get out over when leaving).

You also don't have to worry about headroom — there's plenty of it — or banging elbows with your front passenger who can make good use of the sliding padded armrest between the front seats. Adding to the ambiance is the inner calm — the Picanto is the quietest car in class with just 68 decibels at a steady cruise.

Keeping the driver informed and in control while on the move is a central seven-inch touchscreen with intuitive menus that respond quickly to finger-taps. Hard 'jump' buttons are set four each side of the screen for quick access to all key departments.

The touchscreen sits high on the fascia, horizontally aligned with an instrument panel that's seen perfectly through the top sector of the flat-bottomed, leather-wrapped steering wheel (with tactile perforated work areas and remote controls for voice, phone, and trip computer).

Smartphone mirroring is via Apple CarPlay and Android Auto, both of which let occupants connect to various apps and functions, including voice-guided handsfree calls and texts. Android Auto also gives access to Google maps navigation and Google Play music while Apple CarPlay links to pre-loaded maps, music, texts and messages and audio books, all through Siri voice control.

Entertainment is taken care of by a six-speaker audio system, DAB radio, and Bluetooth with music streaming as well as, if you prefer to bring your own media device, USB and Aux ports. Also integrated into the display is a reversing camera (with dynamic guidelines). When it comes to backing up you also get rear parking sensors so you should be able to manage going backwards without any of that Flintstone-era over-the-shoulder nonsense.

As regards going towards the horizon, that's easy thanks to a fine driving position in a supportive seat made better by a deep windscreen framed by slim front pillars and generous side windows — all of which makes the Picanto a relaxing car to drive on urban roads often complicated by poorly marked bus lanes, roundabouts, and multiple junctions.

The Picanto is not only one of the most spacious cars in its class but for a small car it's unexpectedly big on in-cabin storage, that includes a party-piece set of retractable cupholders that spin away out of sight at the press of a button, leaving you with a large open tray ahead of the gearlever with USB, Aux and 12v sockets (and a home-from-home for your mobile), slim but usable door bins that will hold small bottles, a deep cubby under the centre armrest, and a handy L-shaped bin around the pull-up handbrake.

Given the amount of time city cars are likely to spend in their congested natural environments, the Picanto's autonomous emergency city braking with pedestrian recognition is essential — active between 5mph and 50mph, it will, if necessary, automatically brake down to a complete stop (in fact, even up to 107mph, partial autonomous braking comes into play to reduce the severity, or prevent, collisions). Six airbags are also standard-fit items, as too is electronic stability control, emergency stop signalling, hill-start assist, tyre pressure monitoring, auto lights, bi-function projection headlights, LED daytime running lights, LED rear lights and, for those long out-of-town trips, cruise control.

You may think that being a city car its makers had set aside the best room and seats for the front pair. Not so — swing open a back door (it opens almost to right angles for easy access) and the Picanto's back cabin is equally welcoming with the same pleasant-to-the-touch grey faux leather stretched over well-padded seats; the hip- points are high so no dropping down — just sit easily and pull in your legs.

The backrest is nicely reclined at a relaxing angle, the outer armrests wide, knees won't be pressed against the seatback and there's loads of foot room (made better by the lack of a central floor tunnel) and, despite privacy glass to the side windows and tailgate screen, it's bright and airy. Headroom is okay too, and even a six-footer will fit without shoehorning.

Three side-by-side is doable and unlike on some of the Picanto's competitors, there are three belts and three headrests. Those carrying youngsters will also be pleased to find two Isofix child seat mounting points. Some passengers like to 'strap-hang' while travelling and the Picanto caters to them too with damped grab handles; the windows are electric (some other city cars only give you manual wind-ups) plus there's a magazine pouch for oddments and child safe rear door locks.

City car owners won't be expecting to move white goods such as a fridge-freezer but even so the Picanto is pretty handy in carryall mode. Raise the high-lifting tailgate, drop the 60:40-split rear seatbacks (they fold near enough flat) and you'll have a loadbay that runs to 1,010 litres. Even with the back seats otherwise occupied the Picanto offers a very usable, class-best 255 litres for general shopping and carrying.

You can also carry a further 60kg on the roof. And if you like to keep some things well and truly hidden, then you'll be happy to find a deep well either side of the tyre repair kit under the boot floor that offers some 'secret' stowage.

Roses are red, violets are blue; the Picanto's a city car, that's at home in the country too… So, is it for you? With its roomy and attractive interior, near-50mpg economy, industry-best seven-year warranty and enjoyable open-road driveability, the crossover-themed X-Line is a definite step-up for a city car. ~ MotorBar