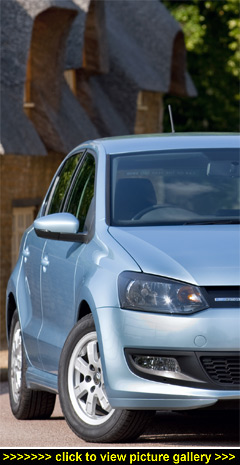 “Volkswagen’s latest BlueMotion
Polo three- and five-door ‘supermini’-
sized models come with just 91g/km
of CO2 emissions. This means no
road tax currently payable through-
out its lifetime and, for London users,
there is currently no Congestion
Charge payable. All this plus an
average consumption of 80.7mpg...”

WITH THE NEW '60' REGISTRATION PLATE change month of September almost upon us, frugal motoring costs are still high on the agenda for the UK's new car buyers. Right on cue comes VW's Polo BlueMotion. The three-door hatch costs Ł14,445; the five-door option carries a Ł600 premium. While on the subject of figures, the 1.2-litre, TDI three-cylinder, 12-valve common-rail turbodiesel engine develops 74bhp and 133lb ft of torque for a top speed of 107mph with zero to 62mph taking 13.9 seconds.

The Polo is VW's second best-selling model range in the UK, after the family-size sector Golf. Prices for the Polo range start at Ł9,790 for the 1.2-litre petrol S three-door rising to Ł18,875 for the new 1.4-litre GTI with a 7-speed DSG twin-clutch auto 'box and a five-door body style.

In the first seven months of this year the Polo has achieved 29,381 UK sales, putting it in sixth position in the Top Ten sales chart — and just one place below the Golf. Volkswagen's UK sales continue to grow with an increase of 22% so far this year to 108,644 units. This puts them in third position as a brand behind the number one seller Ford (with 176,792 sales) and Vauxhall in second place (150,141 registrations).

The new, fifth-generation Polo is the largest ever and also the most technically advanced. In fact, the new Polo is just like a smaller Golf: solid, well built and with exemplary handling and balance. It is a real chip of the old block because it looks like a Golf, encouraging cash-conscious owners to downsize without moving to a lesser product. Talking of downsizing, the three-door Golf offers 350-1,305 litres of load space; the three-door Polo 280-952 litres.

If these endorsements do not bring in more sales then the BlueMotion cost of motoring credentials surely will for 'eco' and high-mileage drivers. As countless automotive manufacturers point out, modern technology petrol and diesel engines are more fuel and CO2 friendly and cheaper in real-world motoring conditions than Hybrids, electric plug-ins or future fuel-cell models.

Yes alternative powered vehicles will have a place in the market for some users but the mainstream market will remain petrol or diesel power for many years to come, and each year the improvements continue arriving. There are fewer compromises to be made driving a fuel-efficient diesel or petrol fuelled car; with a Hybrid or electric powered vehicle there are significant drawbacks as they need care to achieve fuel and CO2 savings and, of course, they cost significantly more to buy.

Talking of real-life conditions — my test Polo 1.2 TDI BlueMotion three-door hatch achieved an average 67.6mpg during my week's motoring. This driving included lots of short runs into town and a longer motorway journey carrying a passenger and luggage. On the motorway, cruising at 70mph, the Polo BlueMotion returned 72.2mpg and the worst figure I saw on the on-board computer was 61mpg for an early morning stop-start journey in traffic.

So it's not the 80.7mpg official figure claimed by VW but for the real-world, 72mpg+ is better than any Hybrid I've driven on similar journeys and the car is considerably cheaper to buy in the first place. As I say, driving with no compromises.

Well, there are a few. The 1.2-litre, three-cylinder TDI turbodiesel engine growls a bit under load; it's not the smoothest or quietest unit around but generally three-cylinder engines tend to be more raucous than four-cylinder units. The gearing is high, so be prepared for lots of down-changing to climb hills or when overtaking as the peak torque only arrives at 2,000rpm.

Volkswagen has made a few changes to the latest Polo's styling for the BlueMotion model. The aerodynamics are smoothed by blanking off the grille and the cooling ducts usually mounted in the front bumper have been moved to the underside of the car. The front bumper has a splitter added to its lower edge, there is a small rear wing to smooth airflow over and away from the bodyshell; there is also a more rounded rear bumper and a set of side skirts to speed up airflow.

The 15-inch alloy wheels are shod with low-rolling resistance tyres which firm up the ride (but only marginally so) and this Polo still remains a comfortable car to ride in and the handling is well balanced as always. I actually like the styling tweaks because they give the supermini a sportier look. There are also start/stop and energy recovery during braking systems fitted as well as ESP stability control, traction control and an electronic differential lock.

Inside there is the usual high quality fit and finish and a good level of equipment. The doors are nice and solid to open and close and they give the Polo a quality feel. Specification includes a full range of airbags and active front seat head restraints, semi-automatic air conditioning, electrically-operated windows and door mirrors, cruise control, multifunction computer, optimum gearchange point indicator, a good sound system, lots of storage space, centre armrest and folding rear seats.

In most ways the BlueMotion versions of the Polo add up to a good choice for 'eco' driving owners. But the model does cost more than the 1.6-litre TDI turbodiesel and the 1.4-litre petrol versions, so private buyers will need to cover more miles to make their extra purchase cost investment financially viable. It is a real pity that manufacturers feel they need to charge customers more for 'eco' models over mainstream versions.