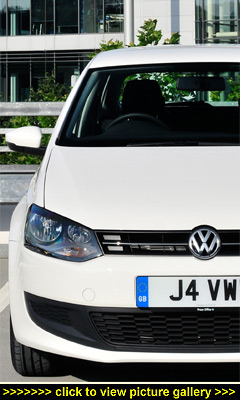 “Narrowly beaten to the title of
2010 International Car of the Year,
the new Volkswagen Polo is in
reality a scaled-down version of
the highly praised Golf...”

WITH CUSTOMERS DOWNSIZING because of the economic climate and the huge short-term success from the Scrappage campaign, the Polo has been catapulted into fourth position of the UK's new car sales Top Ten chart so I'm taking a closer look at the product.

I had originally tested the first five-door Polo models last September and now three-door models have joined the line-up and more engine options, including BlueMotion versions, are on their way.

One of the issues about testing new models at a media introduction is that you can only have a relatively short time behind the wheel and so you only gain a snapshot of what the car is all about — good, bad and indifferent. However, to get a clearer picture sometimes it is advisable to spend more time behind the wheel and that is what I have done with the Polo, especially as the car just felt so good and worthy of considerable praise.

Initially VW suggested 60% of UK Polo sales would go to retail buyers but that figure has probably been higher because of the Scrappage campaign. Around 60% of Polo customers will choose a five-door model simply because it is more practical. Trim and equipment levels are S, Moda, SE and SEL and all models include, as standard, a five-star EuroNCAP safety rating, ABS braking and an ESP handling programme.

The frisky but noisy 1.2-litre petrol engines will be the best sellers because of their lower purchase price but the 1.4-litre petrol unit, because it offers more power and torque and is smoother, would be my choice. Around 16% of Polo customers will opt for a diesel engine but to make this a wise decision customers really have to cover a high annual mileage. Yes, the diesel unit's fuel economy is better and the BIK company car tax and road tax are lower but the purchase price for a 1.6-litre TDI 89bhp engine over a 1.4-litre petrol 84bhp unit is Ł1,445 more. Currently the Polo range starts at Ł9,910 and tops out at Ł15,775.

For anybody covering less than 20,000 miles a year my recommendation is to buy the Polo five-door in SE trim and equipment level with the 1.4-litre petrol engine which carries a 'sticker' price of Ł13,030 with a manual gearbox. An auto option adds Ł1,200.

However to get my longer Polo 'fix' Volkswagen kindly sent me a five-door 1.6-litre TDI 89bhp diesel in top of the range SEL specification which carries a significant price tag of Ł15,775. The same specification model with a 1.4-litre (and more lively) petrol engine is Ł14,330.

Petrol or diesel powered, the new Polo is well balanced: it feels strong, well made, safe and offers a good mix of comfort, agility and control. The new models are also larger than the previous Polo and the equipment levels are high so they will appeal to downsizing customers. In fact, the Polo is just like a smaller edition Golf in both looks and driveability. Talking of looks, it certainly looked impressive parked on my driveway — yet another good reason to test a new model for a bit longer and at home!

However, the 1.6-litre 89bhp diesel version was a disappointment — something you can only find out when you live with a car for day-in-day-out motoring as opposed to a short snapshot drive. Because the drivetrain is so highly geared (for the best possible 'official' fuel economy figures and the lowest possible CO2 emission figures to optimise road tax and BIK charges), this diesel-powered model was very hard work.

Even the 170lb ft of torque from 1,500rpm wasn't enough for this engine to be remotely responsive in fourth and especially fifth gears except during motorway driving. The car needed to be pushed along all the time and even in slow urban traffic it was never eager to please and required constant use of the gearbox.

I generally like diesel engines because they are fuel-frugal and responsive. However, both the PSA Peugeot-Citroen and the Renault-Nissan diesels of this capacity are all much better to drive than the Polo — and just as economical.

Officially this model will return 65.7mpg in the Combined Cycle; my test car achieved 58.3mpg at best for a 230mile motorway journey at legal speeds. At worst, the car returned 48mpg for local driving. For the record the CO2 emissions are a low 112g/km which currently means a Ł35 road tax charge but under the new First Year VED rate this makes the Polo exempt although for the second year onwards this goes back up, to Ł30.

Against: High purchase price not offset by low running costs and tiring to drive on long journeys due to the high gearing that dulls the engine's potential. For: A Polo that looks as good as a Golf, more interior space, better built, better equipped and with better balance than previous models, high residual values. All things considered the Polo is a very good supermini, probably the best, but unfortunately not with this diesel engine. — David Miles