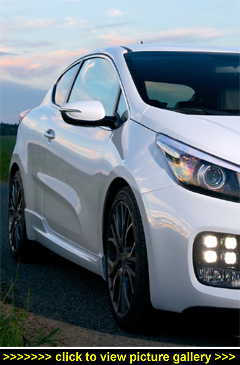 “Torrential rain, flooded roads,
winds strong enough to pluck trees
from the waterlogged ground and
toss them around as easily as
tumbleweed — not the ideal scenario
for putting a pokey GT through its
paces. However, this was storm-hit
Britain over the Christmas break and
there were no options...”

SO IT WAS EITHER STAY IN AND WATCH reruns of the epic disaster movie 2012 — or man-up and go out and drive in the real-life equivalent. With an-all new GT sitting on your drive, what would you do? Yeah, and that's exactly what we did, too. Packed the car with wellies, torch, spare socks, chocolate (Lindt Orange Intense Noir) and a brace of fully charged mobiles and then, just like the eponymous Jack, we hit the road…

The all-new GT we fired up was the just-on-sale 201bhp three-door pro_cee'd from Kia — the South Korean car-maker's very first high-performance model that, honouring the slim GT badge on its shapely rump, is good for 143mph and 0-60mph in 7.4 seconds.

Power comes for a 201bhp turboed direct injection 1.6-litre four-pot petrol unit that's strong on torque — 195lb ft of it that serves up a steady surge of usable power from 1,750rpm through to 4,500rpm. So, whether you call it 'proceed' or 'pro_cee'd', this GT can, indeed, proceed smartly…

Acceleration off the line is purposeful with get-up-and-go eager in the important low- to mid-range accompanied, under load, by a pleasingly rorty soundtrack. Use the gearbox well (easy given the GT's close-ratio six-speed manual gearbox's slick change action) and you'll never need to get too close to the red-line to maintain your charge — 5K is as high as you really need to go. In fact it's nicely tractable whatever you ask of it, so good news for those who want their sporty hatch to be usable for real-world living: commuting from A to B, shopping, and the like.

And the cost at the pumps of all this? Officially, 38.2mpg in the Combined Cycle. Hard-driven like all our test cars, the GT delivered a better than expected 35.1mpg average.

Kia, as most everybody knows, has strongly established itself in the marketplace by offering a well-judged line-up of quality-built, attractively-styled and temptingly-priced real-world cars for real-world customers. The new GT is no rule-breaker — it comes in two trim versions and both come comprehensively equipped for the money: Ł19,995 (GT) and Ł23,995 (GT Tech).

Visually it's unmistakably a GT — the smart, three-door coupe-style looks underscored by a low and wide street stance that's very eye-catching; distinctive too are the unique 'ice-cube' LED daytime running lights bracketing the high-gloss mesh grille. Separated by beefy side-skirts, two-tone 18-inch alloys with red brake callipers catch your eye. At the tail a steeply raked tailgate, roof spoiler, LED light clusters, under-bumper diffuser and twin tailpipes add to the effect — leaving you're in no doubt that this is a sports machine.

The very first thing you notice on swinging open one of the big, long doors are the leather-and-faux-suede Recaro seats; they definitely add 'GT' ambience — plus, with long seat bases, decent under-thigh support, and some decent bolstering, they're comfortable and nicely supportive. Both front seats, incidentally, come with power-adjustable lumbar support. Visibility to the front and sides is good — you won't have any trouble placing this pro_cee'd accurately on the tarmac.

And while the front seatbelts aren't height adjustable, you do get your belt handed to you on nifty servers. Saves all that spine-popping, yoga-type twisting usually mandatory when buckling-up in coupes.

Safety-wise it has all the essentials, including front, side and curtain airbags, stability control, emergency stop signalling, Hill-start Assist, auto lights and wipes, and cornering lights.

Some GT's seem to favour chunky-rimmed steering wheels — not the Kia GT, which sports a seriously multifunction three-spoker with a slim rim wrapped in leather with perforated grip areas that's easy on your fingers when you're working it hard.

One button on the wheel that particularly appeals is the one marked 'GT' — press it and the full colour LCD instrument display switches instantly from a traditional analogue speedometer to a 'sports' mode with a crystal clear digital speed readout flanked by real-time displays for turbo boost and torque output. Definitely not a gimmick.

Let your left hand fall (a very short way) from the leather rim and it will encounter a tactile glossy spherical gear knob that fits cosily in your left palm — and that makes stirring the six-speed manual 'box a pleasure. The handbrake sticks with 'trad' and comes with a nice clean action.

Unlike many of the breed, this GT from Kia has plenty of storage space for all the accoutrements that today's drivers need to cart around with them, from Skinny Lattes to smart phones. Door pockets are big, deep and usefully accommodating plus there's a dedicated holder for your shades, and a large cooled glovebox.

If you want all the bells and whistles you can spend an extra Ł2,500 on the Tech model. You'll then get more and even better goodies including climate control, SatNav with a 7-inch touchscreen, heated seats and steering wheel, reversing camera, auto wipes, and xenon lights; and you won't even have to turn a key — the Tech also comes with a starter button and smart entry system.

Being a GT doesn't preclude practicality — the boot is a realistic 380 litres but whenever you need to lug something around other than a front passenger you can always fold down the 60:40 split rear backrests, trading rear passenger seating for a surprisingly accommodating 1,225-litre loadbay.

Better still, the seatbacks fold level with the boot floor — and without tangling in the seatbelts. And it's the same when you need to reverse the procedure; they snap back into place without snagging the belts. A luggage net and sturdy bag hooks are there to keep your weekly shop (and Waitrose wine) safe; and, beneath the boot floor, you'll find a selection of large, functional multi-storage trays. Perfect.

And of course you can take your friends — more specifically, your adult friends — along for the ride; one beside you and two more behind. Rear seat backrests are set at a comfortable angle and even sitting up tall there's air between the top of your head and the roof. There's space, too, for legs and knees and it's perfectly fine for extended journeys so you won't hear any complaints from those travelling in the back.

And, in spite of the 'kicked up' rear side windows, the rear compartment feels pleasantly airy. If you've got more than three friends, not a problem — a fourth will fit between the two rear outers.

Oh, and something else they'll like: the front seatbacks tilt 'n' slide smoothly out of the way for easy access to and from the rear cab and, for those in the front, return to their original settings every time without fail.

The GT puts its power down through its front wheels and there's plenty of front-end bite. The multi-link rear suspension has been tweaked to deliver spirited performance, with firmer springs, stiffer dampers and a fatter rear anti-roll bar along with uprated bushes.

And it does; the GT feels gratifyingly planted round fast bends, tracking cleanly through a series of snaking curves. Put though its paces on unfamiliar and soaking wet roads at night, it proved to be both capable and trustworthy. And fun.

As you'd expect, the brakes have been beefed-up and there's a stability control system. The electric power steering has just the one weighting, unlike the more bread-and-butter cee'd models which have an adjustable assistance programme.

And despite the pacey dynamics and 18-inch alloys wearing low-pro rubber, the GT manages a comfortable ride, smoothing out the worst side-effects of bodged British blacktop (for the record, it's currently estimated that over ten billion pounds needs to be spent just to catch up with the backlog of British potholes).

Helped along by its eagerness to let you get the most out of its engine and gearbox, its gratifyingly quick and determined whenever your mood — or life itself — takes you down backroads. Equally, it's satisfyingly laid-back for everyday driving and when playing the motorway cruiser, when you'll appreciate its well-insulated cabin and easy high-speed gait.

With its winning looks, a Ł20K price that undercuts most other sporty hot-hatch rivals, oodles of on-board kit, usefully-fast performance combined with everyday usability and a 7-year/100,000-mile warranty, the pro_cee'd GT makes a compelling case for itself; it has 'buy me' written all over its sleek body. As the Borg would say: 'Resistance is futile'. — MotorBar