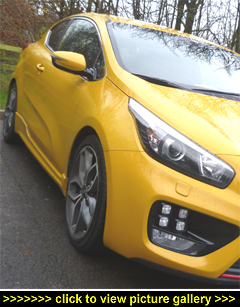 “With a 201bhp turbocharged
1.6-litre petrol engine calling the
shots, Kia’s three-door pro_cee’d
GT is as entertaining to drive as
it is dramatic to look at. Enjoy!”

THE GOOD NEWS IS THAT KIA KNOW just where to draw the line — at 201bhp, which is just enough to make the GT entertainingly sporty without coming over all unnecessary and turning into a trackday special. For drivers who like some 'kick' from their steed, the pro_cee'd GT is swift, responsive, and fun to drive — but, crucially, it's also comfortable.

Even when not finished in the standout Yellow Flame paintwork of our test car, the three-door pro_cee'd looks very much the GT with its cab-forward design and short thrusting nose fronting a long, lean, wedge-shaped bodyshell and smart dark alloy wheels tightly framed by flat-cut wheelarches.

The quad 'ice cube' clusters of LED daytime running lights bracketing the wide, functional lower air intake, linked by a red stripe across the front splitter and crowned by a black high-gloss mesh 'tiger-nose' grille really do set it apart.

At the tail the steeply angled rear screen is capped by a spoiler while the tailgate itself runs down between the GT's broad shoulders and new oval-shaped signature LED taillight units. Chromed sports tailpipes exit the bodywork either side of the diffuser inset into the lower edge of the rear bumper. Looks-wise, it's a definite 'wow' — and well able to outshine its Euro-zone rivals in the car park.

Swing open the long coupe-like door — you don't have to open it far to get in easily — and you'll be welcomed by an invitingly shapely, suede-and-leather Recaro sports seat. Whoever rides shotgun will have plenty of room to stretch out their legs and the longish seat bases provide effective under-knee support. With most three-door models there's usually a discombobulating stretch to get the seatbelt — not with the GT; a belt 'butler' politely hands it to you.

The Recaros are grippy hip-huggers that hold you firmly when you need it, but never pinch. Plus they have power lumbar adjustment and three-stage heating. For the driver this is tied in with an excellent driving position that provides good all-round visibility.

Once you're behind the grippy wheel there's a lot that adds to the 'GT' look and feel. For a start, the wheel itself — it's a smart, flat-bottomed, all-black item with perforated leather work areas and red stitching. Multifunction controls include those for cruise, speed limiter, audio, phone and the driver's computer menu. Close to hand is an illuminated aluminium Start/Stop engine button that's part of the keyless Smart Entry system.

Not only are the Recaros heated but the wheel is too. This is good news — if you haven't yet tried one prepare to be pleasantly surprised as it doesn't just come into its own when Jack Frost is on the prowl, but is great all year round because it keeps your hands and fingers nicely flexible.

A particularly neat piece of kit is the high-definition TFT LCD multifunction display. Press the 'GT' button on the wheel and the analogue-effect speedometer display changes to Performance mode showing digital speed along with engine torque, turbo boost pressure, and important trip data.

Also while in Performance mode an electronic sound generator injects a sportier engine note into the cabin through the car's speakers whenever you press the stainless steel pedal to the metal. And more civilised than a rip-roaring exhaust note that's likely to become tiresome during a long road trip.

Other 2016-model year equipment upgrades include the addition of an MP3-compatible DAB radio as part of the six-speaker audio system and illuminated USB and AUX ports — although you won't find a CD player due to buyers' preferences for digital music streaming. Bluetooth phone connectivity with music streaming is also standard.

Buttons either side of the screen allow quick jumps into top-level menus and map 'zooming'. And for when going backwards is more important than going forwards, the screen shows the view from the reversing camera overlaid with a useful positioning grid.

The list of standard-fit equipment is long and we haven't mentioned it all, but other essentials fitted as standard include a quick-acting 2Zone climate control system, one-shot up/down front windows (the rear glass is fixed), tinted glass with privacy glass to the rear side windows and tailgate, auto lights and wipes, and on-demand powerfold door mirrors that autofold when locking and leaving.

Not only does the GT make excellent use of the space within its 4.3m body, but it's also well supplied with cabin storage for all your 'stuff' including a big cooled glovebox, door pockets that will take bottles and a drop-down sunglasses holder for your shades.

Filling the GT's engine bay is a turboed 1.6-litre lightweight all-aluminium four-pot that gets the power to the front wheels via a six-speed manual 'box.

Alongside 201bhp it puts out 195lb ft of torque which together with peak torque now hitting earlier at 1,500rpm (and available without interruption all the way to 4,500rpm) gives the GT plenty of 'move it-move it' — 0-60mph is dismissed in 7.3 seconds and it will run all the way to 143mph. It's responsive and perfectly happy to be used hard but, to its credit, is equally nonplussed pottering around 20mph city zones.

Not only that, but this GT drives brilliantly. The gear knob is a palm-fitting, black leather ball and the change action is quick and clean so there's physical satisfaction in making the best of the 'box's six ratios. Another big plus is the decently-weighted, rack-and-pinion, motor-driven power steering that replaces the variable rate 'Flex Steer' system found in less high-spirited pro_cee'd models. Sitting on retuned springs and dampers it feels reassuringly planted through corners, resists understeer and torque-steer well and is really easy to drive quickly.

Traditionally the default hot-hatch ride is more trackday 'bump-stop' than glide. No such downside with Kia's GT — although stiffer, its sports suspension has ample compliance to make it an enjoyable everyday steer. Hardcore hot-hatch pilots might grumble about the lack of rumble but keen drivers will applaud the GT's easygoing nature — and whenever they feel like some quick-time driving the GT is always more than up for it.

The back seat can accommodate three adults relatively comfortably; getting them there is not a problem either because the Recaros have an easy tilt-and-slide action that allows unhampered access. There's enough headroom and heads are a long way from the rear screen; backrest angles are good; and the seats comfy. Loads of knee and leg room and, as there's no transmission tunnel, room for three sets of feet all make travelling in the back cabin pleasant.

Views out are far better than the rising outer waistline would suggest and there's even room for refreshments — can/bottle-holding bins are sited each side of the rear seat.

The GT's boot swallows an impressive 380 litres of luggage — loaded through a light-to- lift, high-opening tailgate. Another thoughtful touch: the rear belts stay completely out of the way when the 60:40-split rear seatbacks are folded to extend the boot into a useful 1,225-litre loadbay.

In addition to the expected 'stretchy' luggage net, bag hooks and tie-down rings, the boot floor lifts to reveal not one but two stacked storage trays: the upper one is divided into seven separate sections; the one below has a large single compartment and also houses the tyre repair kit.

Making things even easier, there's a retaining strap to keep the boot floor 'lid' out of your way when accessing the trays. The lightweight rigid luggage cover-cum-rear parcel shelf is also easily removed. All of which adds up to a lot of versatility for a sportily styled three-door hatch.

Another figure that will be of interest to those with Ł23K to spend on a fun, three-door GT is the fuel consumption. Officially this stands at 38.2mpg for the combined cycle with emissions of 170g/km.

However, a week spent enjoying the GT's lively dynamic abilities didn't damage any MotorBar plastic thanks to an overall average of 34.5mpg. Few owners could honestly complain about that, especially when the GT comes with the longest transferrable warranty of any carmaker — Kia's seven-year, 100,000-mile peace-of-mind makes the ultimate backstop.

While Kia is not best-known for being the purveyor of hot-hatchbacks this, their firstborn, is an incredibly well-rounded package that serves up thoroughly enjoyable driving with adrenaline spikes without the need to visit an osteopath every time you've had some fun. — MotorBar