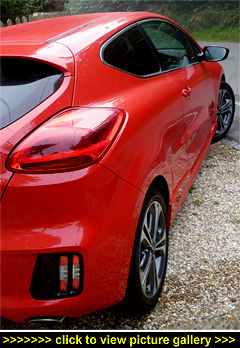 “We live in a world where smaller
is the new black — be it smartphones
or car engines, they’re all shrinking.
Continuing down this road, Kia
has recently introduced a 1.0-litre
three-cylinder engine for its sporty-
looking pro_cee’d hatchback —
and it’s very good news indeed...”

AT THE SAME TIME, KIA HAS ALSO LAUNCHED a new GT-Line spec that offers much of what makes the flagship pro_cee'd — the rakish 201bhp GT — stand out but with lower running costs and a more comfort-oriented chassis.

The more purposeful look of GT-Line models owes its visual impact to some harmonised styling enhancements starting at the thrusting nose where a deep front bumper is flanked by ice cube-style LED daytime running lights housed in high-gloss black panels along with the foglights. A lower secondary black grille runs below the main high-gloss black mesh main grille, itself defined by a subtle graphite chrome surround. Sill extensions link the nose and tail between titanium metallic finish 17-inch alloy wheels with machined faces.

The rear bumper is neatly sculpted into the bodywork below a tailgate flanked by full LED back light units that cut into the rear shoulders and tailgate; seen from the side they create a dramatic teardrop effect. A rear spoiler and chromed oval exhaust tailpipe at each back corner further underscore the GT-Line's hunkered-down demeanour.

While the GT-Line's visual flourishes make the wedge-shaped pro_cee'd look even more aggressive and purposeful, under the skin there are no 'go-faster' suspension, steering or braking mods.

The ecoTurbo comes in two power specs: 98bhp and 118bhp. The latter is the ideal choice to slot into the GT-Line's engine bay where, aided by a double overhead camshaft, direct fuel injection and a turbo, it produces 126lb ft of torque between 1,500 and 4,000rpm. Drive to the front wheels is through a clean-changing, six-speed manual 'box. And for all this you'll pay just Ł19,720.

For which you'll get acceleration off the line to 60mph in 10.7 seconds, a top speed of 118mph and probably better the 41mpg we averaged over mixed roads in the course of a week's vigorous testing — officially, fuel consumption is 57.6mpg in the combined cycle and Kia's Intelligent Stop & Go engine stop/start is fitted to help save fuel and ensure that no CO2 is emitted while you're stationary in traffic. CO2 emissions are a low-band 115g/km (no road tax due the first year, and then just Ł30 annually from the second).

The GT-Line cabin is very much in keeping with 'sporty' driving. First seen on opening either of the two large front doors (that provide very easy in/out even in car parks) is the smart black fabric upholstery with pleated-effect, cross-stitch centre panels strikingly defined by white flashes. The seats themselves are shapely with decent but not intrusive bolstering and together with decent built-in shoulder support and power lumbar adjustment are comfortable for both long and short trips. Both also feature height adjustment.

As you'd expect of a sporty cabin, the dash is driver-centric with a good-to-grip leather-wrapped steering wheel with high-gloss black inserts and perforated work areas; in the footwell your feet press down on alloy pedals. There's also a restful ledge for your left foot when 'in the cruise'.

The slimline glasshouse might mislead you into thinking headroom will be at a premium — in fact the opposite is true; you sit low and with a full fist of air between the crown of your head and the black roof-lining. There's more room to your sides, with full-length outer armrests to complement the central padded one.

Adding to the comfort levels are the very welcome belt-butlers that 'hand' the driver and front passenger their belts to save serious contortions prior to belting-up. The driving position is spot-on and leaves you perfectly set-up for the short-ish gearlever, the trad handbrake and the engine Start/Stop button. In keeping with the eager turboed engine, the change action is encouragingly good.

Further setting the 'GT' scene, the well-laid-out dash continues the 'black' theme with a matt black finish to the touchscreen with contrasting high-gloss black used for the centre console tray, air vent surrounds and door trims. Door inserts are also black; a tactile faux leather. Despite the dark décor, the purposeful cabin is pleasantly airy and very 'European'. No big surprise, then, to learn that the South Korean pro_cee'd was designed at Kia's Frankfurt centre.

Centre-stage of the fascia is a 7-inch touchscreen infotainment display through which the latest generation of Kia Connected Services brings you TomTom SatNav — in addition to full UK postcode destination entry (with fast, short or economical route-planning) and turn-by-turn navigation instructions in the instrument panel, you can access speed camera locations plus get live traffic updates and weather information as well as perform local searches. Also very much appreciated are the über-clear warnings of upcoming direction changes, spoken in good time.

For entertainment you get an iPod-compatible six-speaker audio system with a DAB radio; and there's a small 'cave' below the climate panel for your smartphone or mobile music box with two 12v power outlets and illuminated USB and Aux ports.

In addition to items already mentioned, there's a fine 2Zone climate control system (during our week with the car, outside the cabin temperatures were running at 30-degrees centigrade but on the inside we were kept joyously super-cool), keyless entry and locking, one-shot up/down power windows, tinted glass with privacy glass for the rear windows and tailgate, cooled and damped glovebox (that opens level so as not to spill its contents into your front passenger's lap, as some do), heated and electrically-operated door mirrors with powerfold on-demand as well as auto-folding on locking and leaving, auto lights and wipes, auto-dimming rearview, rear parking sensors backed up with a rearview camera, drive-away automatic door locking, a drop-down sunglasses holder, and ambient front lighting.

If you're allocated a back seat don't hang your head in disappointment: not only is access easy past the tilt-and-slide front seat but the pro_ceed's rising beltline, low roofline and triangular-shaped fixed rear window are all very misleading — because once in your seat (as smartly upholstered and as good to sit in as those up front) you'll enjoy the views out while leaning back at a decent angle with a full fist of headroom and enough knee-room to make long journeys doable.

The floor is flat and there's room enough to house three sets of feet and the cabin is wide enough for three to sit side-by-side without any pushing or shoving. Better still, you can enjoy a can of drink — it will fit in the good size bin below the outer armrest on your side until you need it. The deep magazine pouches on the front seatbacks are equally useful. And when you arrive at your destination, you'll find getting out is as hassle-free as getting in.

Sporty styling doesn't compromise day-to-day practicality either as you'll find on opening the tailgate that rises well above head height. The large boot will take 380 litres of luggage and is supplemented by an under-floor storage area — the self-supporting boot floor lifts for easy access to seven deep multi-tray compartments under which is a space-saver spare plus the necessary tools to change a wheel.

On those occasions when you need to carry more, you can drop the flat-folding 60:40-split back seats (they go down smoothly and the belts are conveniently out of the way) to make a 1,225-lire loadbay. And, should it prove useful, the boot or loadbay can be partitioned widthways.

Top speed is shy of the similarly-attired pro_cee'd GT's 143mph but in reality the GT- Line's 118mph is more than enough on today's highly monitored and highly congested roads.

More relevant is the car's responses in the low- and mid-ranges. With maximum torque on call from just 1,500rpm, the three-cylinder GT-Line doesn't hang around; hitting the benchmark 60mph feels quicker than the paper figures say — no doubt thanks to the slick gearchange action and the turboed unit's willingness to rev, and rev smoothly. For a one-litre it certainly zips along and your passengers wouldn't guess it's all from just 998cc.

The gutsy power on tap feels comfortable with the chassis's all-independent suspension. Use the button on the wheel to set the rack-and-pinion's motor driven power assistance to Sport and work the three-pot — it's more than keen, plus the accurate gearchange is a willing accomplice — and you can exploit the predictable roadholding to inject some quality fun into your driving.

Helping out on the twisty bits is the torque vectoring that minimises understeer in hard cornering (by partially braking the inner front wheel). The Hankook rubber (225/45) also does its bit to keep the ride both supple and grippy. Chuckable it may be but that doesn't stop it cruising quietly at the legal limit. Overall, behind the GT-Line's steering wheel is a rewarding place to find yourself.

Fittingly powered by Kia's willing new three-cylinder ecoTurbo engine, the GT-Line offers most of the plus points of the full-blown pro_cee'd GT along with a comfortable ride, and a roomy, well-specced and well-crafted cabin allied to low running costs. Perfect if you want to boldly go! ~ MotorBar