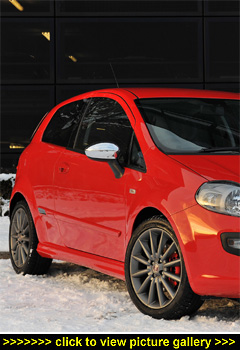 “Fiat’s new Punto Evo has been
described as a ‘breakout’ car.
Not as in ‘out of ‘prison’; more as in
breaking out of old habits. As such
it’s a wake-up call to drivers of other
supermini brands, reminding them
of Fiat’s special talent — of producing
great small cars...”

EVO IS AN APT NAME because the Punto Evo is all about evolving — from the popular Grande Punto. New-look body aside, where the real evolution has gone on is under the bonnet. And its name is 'MultiAir'.

As the world's oil reserves slowly but surely dry up, the challenge for all car manufacturers is to make every drop of fuel that goes into a tank go as far as possible.

And this is precisely what MultiAir does: it's complicated — essentially it's a new take on variable valve timing technology. But in the same way that a driver doesn't need to understand how a double-clutch gearbox or a 4WD differential works to be able to drive a car fitted with them, neither do you need to know MultiAir's technical ins and outs.

With a nod to JFK, it's a case of Ask not what MultiAir is, but what MultiAir can do for you. And that's easy: in the case of the turboed 1,368cc MultiAir petrol-engine powering the Evo Sporting, for the same cubic capacity MultiAir gives superior performance (+10% bhp and +15% torque) and cleaner emissions (-10%).

An impressive set of numbers — and made even better by how they translate into the on-road driving experience. While MultiAir is giving you higher levels of performance, more miles to the gallon and reducing your road tax bill, you're also getting bags of torque from low down the rev range and a crisp throttle response to make good use of it.

This particular MultiAir engine is only available in the top petrol-spec Sporting model costing Ł14,500. For the record, there are currently 24 Evo versions with five trim lines (three 'Comfort' and two 'Sport') plus an extensive options list that includes personalisation choices ranging from wheels and decals to individual door mirror 'skins' and key covers. Prices kick off at Ł10,400 and run all the way up to Ł15,700 for the 120bhp 1.6 MultiJet (diesel) Sporting.

Swing open the door and you'll find an equally appealing and spacious cockpit with smart and inviting sports-style seats upholstered in a mix of different textured fabrics with supportive bolstering. Settle back and the build quality is immediately obvious — cabin plastics and trim all feel good to the touch and there's an unmistakable dash of Italian panache about the fascia and the detailing.

The central air vents, sound system and climate control controls are logically sited, each in their own 'corral' — and the sound system's LCD display looks extra smart with its classy piano black panel surround. No complaints about the switchgear ergonomics: everything is logically sited and easy to reach. And lots of in-cabin storage and oddments space — there's even a proper coin box.

The driver is rewarded with a decent driving position and the leather-wrapped multifunction steering wheel is good to hold and offers a wide range of both height and reach adjustment.

Add to that wide-view door mirrors, a nicely padded handbrake grip and a 'gear shift' reminder that treats you as an adult: it lights up to remind you to change gear but doesn't stay on if you don't. The rev-counter and speedo, both with large red graphics, each occupy their own nacelles and are easy to take in at a glance.

Naturally you also get ABS with Electronic Brakeforce Distribution (EBD) and an Electronic Stability Program (ESP) with Hill Holder to assist with starting off on a slope.

Also standard are Lane Change Warning (when indicating to change lanes, the appropriate fog light flashes once at the same time as the first indicator 'blink' to make the car even more visible to other traffic), Adaptive Cornering Foglights (these switch on automatically, left or right, to illuminate the apexes of bends when negotiating low speed corners), and ecoDrive (downloads driving data to a memory stick for your computer to analyse and tell you how to save fuel and pollute less).

All models (except the entry-level Active) can also be specified with the cutting-edge Blue&Me TomTom system which fits in a specially designed 'dock' at the top of the dashboard and gives fingertip access to a fully portable touchscreen to manage navigation, mobile 'phone, trip computer and MP3 player.

Despite only having one door each side, you can get passengers in the back without any trouble thanks to easy-acting tilt-and-slide front seats. Once there, they'll enjoy a good view out of the airy cabin; and it's roomy and cosy enough for two adults to make long journeys in the back — not just the occasional short hop.

While there are three sets of seatbelts, there are only two headrests (if you need it, the third is an extra Ł50). When not in use, these drop down tight over the rear backrest to maximise the driver's rearward visibility.

Behind the 60:40 split/fold back seats is a respectable-sized boot (275 litres) that expands easily to 1,030 litres although you do end up with a stepped loadbay floor — the good news is that both sections are flat. The loading sill/rear bumper is at thigh height so there's a drop to the boot floor of about eight inches. Side bags are thoughtfully provided in the regular-shaped boot and should you ever get a flat tyre you'll find a repair kit and pump under the floor.

A button you might want to push from time to time is the one that disengages the Start&Stop. One day soon we won't be allowed to turn these fuel-saving systems off, but there are times when the engine shutting down instead of idling every time you stop can be mildly irksome.

For the record, when this happens the music doesn't stop playing, the wipers keep wiping and the air-conditioning carries on cooling you; the only thing that stops is the engine. And, of course, the fuel consumption.

That said, the Evo's Stop&Start works fine, stopping cleanly whenever you pull up, move the gear lever into neutral and let up the clutch. The instant you press down the clutch pedal preparatory to moving off, the Stop&Start restarts the engine.

On the fascia there's another small button that switches the electric power steering to 'city' mode. Don't press it unless you want a very light helm.

Actually, it's not that bad but really only needed when parking in a tight spot when you need to do a lot of wheel-twirling to get in. The 'feel' of the electrically-powered steering in the standard setting is pleasantly light; it's accurate and turns the Evo sharply enough to ensure that you can thread it through fast bends without losing the plot.

Sporting spec versions have a more sporting suspension with firmer settings and, if you'll pardon the pun, you can punt this Punto pretty hard without regrets and with only minimal body lean — it doesn't spoil your fun or your chosen line. Pushed, it's light and tidy and easy to place on the road.

Making it all worthwhile is the eager and punchy MultiAir engine — it's the star in a reasonably priced car. Turbo response is there the moment you floor the pedal (it feels as though there's a willing 2.0-litre lump under the bonnet) and on the boil it all sounds pretty good. The six-speed manual 'box nicely complements the engine's go-for-it character — the action is slick, and baulk-free block changes can be executed smoothly.

Driven in a less urgent manner, the Evo Sporting's suspension proves to be supple enough to ease away bumps and deliver a comfortable ride. At cruising speeds on the motorway it's quiet and refined in the cabin and the miles roll by almost unnoticed.

We Brits love our small cars, which gives the Punto Evo an immediate advantage. It also drives well and won't cost much to run; and that helps too. But there's strong competition in the shape of the Ford Fiesta and Volkswagen Polo.

Ultimately that choice will, for most buyers, come down to how it looks. Don't tut — we all make decisions based on how something or somebody looks; it's a mainstay of our own human EVOlution. In which case, I guess we'll be seeing a lot of Punto Evos on the roads! — MotorBar