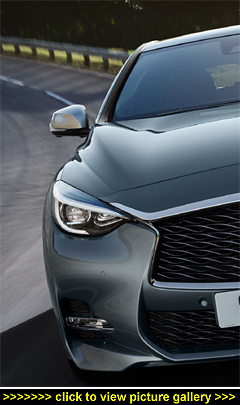 “Infiniti, the premium brand from
Nissan, has just launched its all-new
Q30 five-door hatchback. Designed
and built in the UK, the Q30 competes
against the well-established Audi A3,
BMW 1 Series, Mercedes A-Class,
Volvo V40 and Lexus CT...”

BUT FIRST, A WORD ABOUT ITS ROOTS: the Q30 has the distinction of being not only the first Infiniti model ever to be built in Europe but it was created in Paddington at Nissan's Infiniti design facility, engineered at their Cranfield department and is now in production at Nissan's Sunderland Plant. Following later this year is the QX30, what Infiniti calls a premium active Crossover mid-sized 4x4, which will also be built in the UK.

The Q30 and the future QX30 SUV ranges are vital for the sales expansion of the Infiniti brand to over fifty global markets. Whilst Infiniti, still a fledgling brand (it only came to the UK in 2013), stays tight-lipped about forecasting sales, in the UK the Q30 and QX30 ranges are expected to at least double current Infiniti sales.

But that will be no large figure because as well as being a premium brand, Infiniti is currently a niche one as well — just 1,195 Infiniti cars were sold in the UK last year and even that was 60% up on the previous year.

Essential for increasing UK sales will be the expansion of the Infiniti dealer network. The brand has been too slow to grow in terms of sales/service outlets — currently there are only ten Infiniti centres throughout the UK.

Although this will grow to between 25 and 30 in the future, will that be enough to encourage fleet and company car user-chooser drivers to consider a model where servicing outlets are few and far between?

Infiniti has hinted that they are looking at the feasibility of using the service facilities of Nissan and Daimler / Mercedes-Benz dealerships as well as their own to support the extra UK sales the new ranges should generate.

The Q30/QX30 models are products of the Renault-Nissan Alliance and include its newest partner, Daimler. The new Infiniti models use the latest Mercedes A-Class/GLA platform and three of the four engine options are also sourced from Mercedes.

The Q30 hatchback engine choices are the 109hp (107bhp) 1.5D turbodiesel from Renault-Nissan and, from Mercedes, a 122hp 1.6 turbo petrol, 211hp 2.0 turbo petrol and a 170hp 2.2-litre turbodiesel. All engines, depending on the specification level chosen, are available with 6-speed manual or 7-speed dual-clutch automatic transmissions.

While the sales numbers expected for the Q30 in the UK are quite modest, the choice of models is comparatively huge — I counted no less than forty different derivatives from the price list once the three core specification levels, plus their extra-cost option packs, are included.

Q30 prices start at Ł20,550 and go up to Ł34,890. The three spec levels are SE, Premium and Sport. Extra-cost option packs include City Black, Tech, Tech Gallery White, Tech Café Teak and Business Executive. Which level of specification and which engine will be the most popular in the UK will depend upon how successful the Q30 is in gaining fleet and user-chooser customers. It's likely retail customers will choose the 1.6 turbo petrol while fleet/business users will favour the fuel-frugal and low-CO2 1.5D turbodiesel.

The components of the Q30 and QX30 might come from a variety of sources but the design is all Infiniti; as too are the settings and performance of the suspension, steering and the comfort of seats.

The boldly-styled five-door Q30 has a wedge-shaped coupe side profile with a rising waistline and sloping roof towards the rear. The sides look curvaceous, with deeply sculptured door panels and bulbous wheelarches shrouding the 18-inch alloy wheels fitted across the range as standard. Sport versions sit 15mm lower on the road, with firmer suspension settings.

The quality of the leather and plastic trim areas look of good quality, but the switchgear (which mostly appears to be Mercedes-sourced) is scattered around the front cabin. On my test model, the 1.5D Premium Tech — the likely best-seller for business customers — the electrically-adjustable seating controls were not logically positioned, but mounted on the front doors.

Although classed as a C-segment hatchback the 4.4-metre Q30 appears longer than the competition. Its extended 2,700mm wheelbase provides better than average (in this class) rear seat legroom but the sloping roof does restrict headroom for six-footers.

The 40:60-split/folding rear seatbacks easily extend the roomy 368-litre boot. Rear and rear-quarter visibility is not great but on my test car the front and rear parking sensors and reversing camera did quite a bit to mitigate that.

At the Press launch at Infiniti's Reading centre I got to grips with the 1.5D engine which, if fleet and business sales come to fruition, will be the most appealing because of its low-tax implications. This 1.5D version, with the Premium Tech spec and manual gearbox, weighs in at Ł26,430 while the Infiniti In Touch navigation system adds a further Ł1,400 helping it, price-wise, to live up to its 'premium' branding.

The engine we already know well from other Nissan and Renault models — its 107bhp is relatively modest but the 191lb ft of torque from 1,750rpm makes the Q30's performance just about acceptable, despite being geared for economy. Definitely no road-burner, overtaking on country roads takes a bit of planning although on motorways the engine seemed relaxed and not stressed at 70mph.

Some of my test driving route took me around the busy outskirts of Reading, and in this type of traffic full use of the gearbox was needed. However, the really impressive result was the real-life fuel consumption of 55.3mpg — if I was a fuel- and tax-conscious company car driver I would be very happy with that.

With 108g/km of emissions, road tax is Ł0 for the First Year and then a token Ł20 thereafter. For company car drivers the Benefit-in-Kind tax is rated now at 19% but this should reduce to 18% from April — unless the Chancellor changes his mind before the March Budget.

The Q30's compliant suspension settings mean it rides well although the relatively high ride height and soft settings did produce some body-lean during cornering. Overall though the handling was sure-footed. I'd have preferred a bit more feedback from the steering too, which felt a bit dead around town but on open roads it did weight-up more. Not so good was the road noise intrusion transmitted through the suspension — thumps from potholes and motorway suspension joints were unwelcome cabin visitors.

Overall the Q30 can be regarded at best as a stylish, well-equipped and a fuel-frugal alternative to the already established German premium brand models in its sector. The trouble is, it doesn't really bring anything new to the market except 'exclusivity' because of its small sales numbers so unless the dealer network is expanded quickly it will remain a rare model on our roads. — David Miles