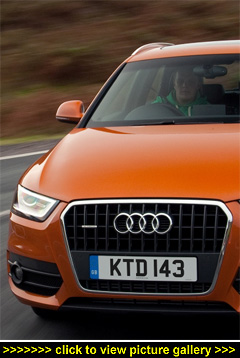 “Totally debadge Audi’s latest
compact SUV, the Q3, and everyone
would still look at it and say ‘Audi’.
And, as you’d expect, it’s a classy-
looker with ‘Q family’ styling and
distinctive kerb appeal...”

THERE'S THE SAME 'COUPE' SIDE PROFILE, muscular wheel arches, rounded rear end and the aggressive front face with the large vertical slatted grille flanked by signature daytime running lights. Inside it's much the same as other Audi Q models although simpler in looks.

It's only just gone on sale and already 2,000 Q3s have been snapped up; in a full year Audi UK expect to sell 8,000. While that's very impressive, even better is the fact that 60% of customers will be 'conquest' buyers moving across to the Audi brand. The corresponding launch of Range Rover's new Evoque in the same sector might dent Audi's aspirations although on average the Q3 costs less to buy and run.

Audi UK are very sure about one thing — eight out of every ten Q3s sold will have a diesel engine, of which half will be fitted with the 174bhp (177PS) 2.0-litre TDI unit with SE spec being chosen by just over half of all customers. Business user-choosers keen to reduce their Benefit-in-Kind tax bills will be sure to be interested in the two-wheel drive 138bhp 2.0-litre TDI version that arrives in December.

Q3 customers covering fewer miles have a choice of two 2.0-litre petrol engines. The most popular of the pair will be the 167bhp unit with a six-speed manual 'box and quattro 4WD; the second is a 208bhp quattro fitted with a seven-speed S tronic automatic.

Customers specifying the S tronic auto have the option (for Ł220) of Audi's Drive Select with this gearbox that, in addition to the comfort, auto and dynamic modes, now provides an 'efficient' setting which, every time the driver lifts off the throttle, disengages its active clutch, thereby allowing the Q3 to use the momentum already built up to 'coast'. Press the brake or throttle pedal and the clutch re-engages.

This new Drive Select function is claimed to improve fuel economy although the on-board computer didn't show any significant improvement in mpg. Driving the steep downhill sections of the North Yorkshire Moors, it was certainly 'interesting' using this setting; a touch of the brakes and the gearbox changed down promptly to restore engine braking. I suspect that this 'efficiency coasting' feature will be more effective in urban commuting and on busy motorways where cars are constantly slowing down and then speeding up again.

We tested the main-selling 174bhp 2.0-litre TDI with the auto 'box, quattro all-wheel drive and Drive Select and the overall fuel consumption came out at 35.8mpg — not close to the official Combined Cycle figure of 47.9mpg. Tailpipe emissions are 156g/km so road tax is Ł165 per year. Company car drivers will have to pay 24% in BIK tax.

The 174bhp TDI unit works well in the Q3, both for urban driving and on the open road. And it's likely to be a popular choice for school run mums because of its compact length; it's also easy to park and nimble, with sharp accurate steering, and a composed ride. Plus it looks classy and has lots of kerb appeal.

The Q3's lightweight construction (helped by an aluminium bonnet and tailgate) gives it lots of agility on the open road while the quattro 4WD provides copious amounts of grip during cornering. The ride is firm but still compliant and generally comfortable.

Although its sales will be relatively small, the cheaper Ł25,690 167bhp 2.0-litre petrol SE is likely to appeal to lower mileage users. This direct injection engine is combined with a six-speed manual 'box and has quattro all-wheel drive as standard.

The engine has 73lb ft less torque than the 2.0-litre diesel so needs to be worked a little harder but even so it manages zero to 62mph in 8.2 seconds and the top speed is 132mph — identical figures for both engines. The official average mpg is 38.7 but on our test drive over the same route it came in at 26.3mpg. With 174g/km CO2 emissions, road tax is Ł265 reducing to Ł190 for the second year onwards.

Climb aboard and you'll find that the Q3's cabin is very much up to Audi's usual high standards of build quality; the fascia layout is simpler but the plastics used around the door pulls look more obvious than on the more expensive Q5 and Q7 models.

Bodies or boxes? If the former, the Q3 will seat five; if the latter there's a maximum 1,365 litres of load space although the split rear seatbacks do not fold completely flat. Incidentally, in five-seat mode the boot is a healthy 460 litres, and the braked towing weight a practical and usable 2,000kg.

Upgrading to the top S line spec will cost you another Ł2,750 and gets you styling changes, more powerful headlights with LED front and tail lights and 18-inch wheels.

Optional equipment includes a hard-drive based SatNav, bigger information display screen, turning headlights, automatic high beam assist and blind spot and lane departure warning systems. And if you plan to use your Q3 for some multiple purpose activities, you might want to tick the boxes for luggage load bed and rear sill protectors.

Overall the Audi Q3 is a valuable addition to the brand's line-up — despite the tough economic climate, sales of compact Crossovers and SUVs are growing significantly and the Q3 is well placed to catch downsizers from larger SUVs and, best of all for Audi, bring in new conquest customers. — David Miles