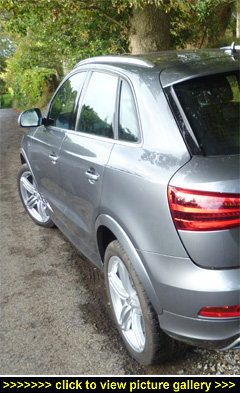 “Thanks to Peter Jackson’s The
Lord of the Rings trilogy, ‘One Ring
to bind them all’ is now probably
one of the world’s best-known lines.
But what of the Four Rings of Power,
forged not in the fires of Mount
Doom but in our time in Ingolstadt.
Not mentioned in Tolkien’s Middle
Earth, they are nonetheless powerful
in their own right, conferring status
on those who possess them...”

TAKE THE LATEST compact premium SUV to wear the four rings, the Audi Q3. Now available with 174bhp turbodiesel power and quattro permanent all-wheel drive, it's a fine contemporary mount for those for whom a Range Rover Evoque is perhaps a smidgen too ostentatious and a BMW X1 not quite fashionable enough.

The Q3's urban-biased packaging (a conveniently compact 4.3 metres from nose to tail) comes wrapped in a handsome bodystyle that's closer to the crossover than the SUV camp.

It might be the smallest SUV in Audi's formidable SUV arsenal but the Q3 is unmistakably a family member courtesy of its prominent grille bracketed by signature LED running lights and, at the back end, the trademark wraparound clamshell-style tailgate topped by a rounded roofline. In short, it's covetable and classy — a premium-looker.

Climb aboard and there's no doubt at all that you're sitting in a premium cabin. High quality trim materials and equally high-end fit and finish are both well established Audi features (and strengths), as too is the uncluttered yet at the same time stylishly-focused fascia.

As usual, brushed alloy trim is used effectively and the dials are as wonderfully crisp and clear as they are good to look at; equally good is the high-resolution driver's information display between and slightly behind them. Overall the ambience has much in common with any bigger Audi costing twice or even three times as much.

Audi's MMI infotainment system uses a flip-up centrally located screen and its ease of use — you almost don't need to read the driver's handbook — makes it a breeze to operate even for IT-phobes. The SatNav is likewise foolproof with brilliant 3D napping. And when you're moving backwards a rear-view camera comes into play supported by four sensors at the nose and tail.

And, certainly in the front, there's no sense of any size compromises compared to the physically larger Q5. While it's compact on the outside, Audi have packed in a lot of people space; more than enough for 4/5 adults. In the front there's a fist of headroom, plenty of elbow and shoulder room and a decent buffer of air between the front passenger and driver; lower down there's good leg, knee and shin room

Average-sized adults travelling in the rear will have no problems getting in or out or getting comfortable — the well padded seats will see to that. Unusually, even the middle slot is comfy. The backrest is set at a decent angle and, despite the sloping roof, even if you sit up straight the top of your head won't brush the roof lining.

Rear knee room is surprisingly decent and there's plenty of room for feet. And because those travelling in the back sit higher than those ahead of them, the views out are interesting.

While 460 litres of boot space should be plenty big enough for most, there's more to come: tip forward the easy-fold rear seats and in a flash 460 becomes 1,365 litres. Once folded, the clean-sided loadbay floor is level and perfectly usable.

Under the boot floor you'll also find an array of six-inch deep storage bins and, in keeping with the Q3's cabin, the boot is trimmed and fitted out to a very high standard.

Audi diesel powerplants are always good performers and this free-revving 174bhp version belts out a muscular 280lb ft of torque from 1,750rpm — meaning you can trickle along lazily and laid-back in traffic while letting the seven-speed dual-clutch transmission take the strain.

But it's no shirker — flex your right foot and you'll discover considerably more, and considerably more convincing, thrust that will have the Q3 barrelling along at a fair lick. Another nice aspect of this TDI is that even when working hard it's never intrusive; for general driving, you're never really aware of it.

The quick shifting and seamlessly smooth S tronic transmission is a well-considered match with the turbodiesel — paddle-shifters on the wheel are very more-ish whenever you feel like taking full control of the shifting. They're also perfect for smart, near-instantaneous downshifts when setting up for a sharp bend or series of bends, simply calling up some powerful engine braking, or prepping for cut-and-thrust roundabouts.

And it's pretty quick off the mark, too: zero to 62mph is run in 8.2 seconds and the top speed maxes out at 132mph. When you're not racing the 174 horses in Sport mode it canters along at a relaxing gait that does wonders for economy. Officially it will return 47.9mpg in the combined cycle; 40.4 around town; and 53.3mpg touring.

Our week's (predominately in and around town) average came out at 38.6mpg — more than acceptable for a 4WD automatic. You can better this, too, if you remember to use the new 'coasting' technology (more about this later) that's available on all S tronic transmission Q3s provided their owners have ticked the options box for Audi's Drive Select.

It may give the appearance of being a SUV but, despite being high-enough for you to see over hedges, the Q3 drives and rides more like a regular hatchback — and that's a very good thing indeed.

Body control is impressive for a taller-riding vehicle and combined with decent grip, confidence-inspiring handling and tidy turn-in, the easy-to-place Q3 can be punted around with minimal lean and surprising equanimity — even ever-tightening bends don't faze it. So 'game on' it is... if that's how you want to play it.

If you need to venture off the beaten track the quattro four-wheel drive will take you there, although most owners will use it rather to keep going during our white winters and to safely ford flooded roads.

Above all though, the Q3 feels optimised for everyday road use — Audi's engineers have signed-off on a SUV with a fine balance between ride comfort and handling — ride quality is more than acceptable, even rolling on triple-spoke 19-inch alloys, and makes light work of second-rate blacktop. Enhanced by the polished drivetrain, the cabin is always refined, quiet and very agreeable to travel in.

For just Ł220 you can specify Drive Select, which allows you to choose from Auto, Dynamic, Efficiency or Comfort driving modes at the press of a switch. Briefly, Dynamic weights-up the steering and sharpens throttle response; Comfort smoothes out second-rate road surfaces, lightens the steering and generally makes driving the Q3 as soothing as it can be; Efficiency mode, unsurprisingly, optimises the fuel economy. Auto decides for you as road conditions change.

Worth noting, if you like having your 'economy' cake as well as eating it, is the Efficiency mode's 'coasting' feature. When selected it disengages the clutch every time the driver lifts off — but only at speeds above 12mph when rolling down a gradient. Under these conditions, lifting off the accelerator disengages the engine. We actually didn't use it (we forgot!) but as mentioned earlier, still achieved a 38.6mpg average — pretty impressive for an automatic four-wheel-drive.

Premium-quality build and cachet are part and parcel of the four-ringed German brand. In addition to being competent, refined, beautifully finished and tastefully styled, the Q3's loftier driving position also provides 'over-hedge' viewing. Four-wheel drive adds important all-weather ability to what is a satisfying ownership and driving experience without, thankfully, the 'I'm all right Jack' arrogance of a traditional 4x4. — MotorBar