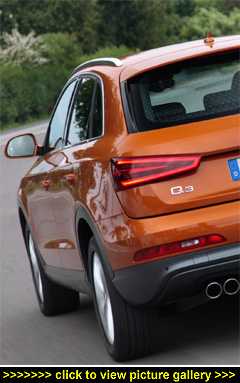 “First came the Q7, a 4x4 so large
the Titanic would have swerved to
avoid it. Then came the more society-
friendly Q5. Now Audi has shrunk
its SUV offering down even further
with the positively cuddly Q3...”

WELCOME TO AUDI'S FIRST-EVER COMPACT SOFT-ROADER. It's very late to the party, but then the whole 'premium' soft-roader idea is still very new — only the BMW X1 and Range Rover Evoque have beaten the Q3 to market.

Of course, Audi had a great basis to start with: sister company VW's Tiguan, which is one of the best compact SUVs on the market. So, has Audi created a premium masterpiece or just made the Tiguan pointlessly more expensive?

I believe the 20% who go for a petrol engine are getting the better deal. Here's why I think the 170PS is the best bet: it's a lot more refined than the diesel; it's got a manual gearbox, which is so much better than the S tronic self-shifter that you're forced to have if you buy the 177PS 2.0 TDI diesel; and it costs Ł2,770 less than the 177PS diesel — a difference that you'll probably never claw back at the fuel pumps and through the marginally-cheaper road tax.

Yes, the diesel has more torque and it drinks less fuel; but it suffers much greater turbo lag. In contrast, the 170PS petrol is more rev-happy and has no flat spots in its performance. Frankly, unless you need to tow a trailer, it's the best engine currently on offer.

Things get even quicker with the 211PS petrol model, which is a genuine eyebrow-raiser in the performance stakes. How about 0-62mph in 6.9 seconds, enough to embarrass many hot hatches? And if that's not enough, a 2.5-litre version with as much as 300bhp is on the cards for the future.

On the road, the Q3 is set up firmly but not uncomfortably so. The ride remains composed whether the surface is smooth or rutted — Yes, you certainly feel imperfections, but it's never jittery. This 'baby' 4x4 also corners confidently, its four-wheel drive system working to keep things well contained on slippery surfaces.

The steering feel is also much better than that of most other SUVs, with a chunky weightiness and good feedback. However, there's always the sense — as you often get with SUVs — that the car is a tad top-heavy, so your confidence during turn-in is reined-in just a touch.

I didn't get an opportunity to try the Q3 off-road, so I don't know how it behaves on the rough stuff, but then most owners are never going to know either: this is, first and foremost, a 'tarmac tank'.

Visually, I'm not 100% sure about the Q3's front-end look — those narrow headlamps and gaping chrome-tinged grille have a touch of Chinese concept car about them. But the rest of the design is typically clean Audi. The roofline borrows elements from the A1 — a sleek curve that almost strays into coupe territory.

Fortunately that roofline doesn't impact on interior space; headroom both front and rear is excellent, although the roof is 'pinched in' a touch at the back. Legroom is also generous for rear-seat passengers, again not something that's a given in this class. And although the load platform is a long way off the ground, the boot swallows a healthy 460 litres of luggage.

The Q3's fit and finish are exemplary and the quality of the plastics and other materials inside is what makes every Audi feel a cut above the opposition.

So, another month, another impressive new Audi! Whether the Q3 has the 'specialness' to get one over on Range Rover's new Evoque is another matter but it's certainly going to be a close-run thing. — Chris Rees