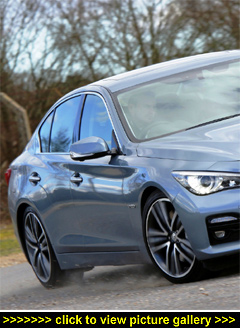 “Infiniti is the premium brand of
Nissan, just as Lexus is for Toyota.
In the UK, Infiniti is probably better
known for its role as title sponsor
and vehicle performance partner
of Red Bull F1 Racing...”

APART FROM THE NEW Q50 saloon, the Infiniti range consists of the Q60 Coupe and Cabriolet models, the Q70 saloon, and the QX50 and QX70 4x4 SUVs.

However, for the first seven months of this year sales have improved by 34%, with 357 registrations, due mainly to the arrival of the Q50 executive range of saloons offering both diesel and petrol-hybrid power options that have allowed them to become more effective in the company car and business user-chooser markets.

A new 2.0-litre, 208bhp, four-cylinder, lightweight turbocharged petrol engine, built in Tennessee, USA, by the Renault-Nissan Alliance and Daimler for the Mercedes C-Class, will soon be joining the Q50 line-up.

And a high-performance 'Eau Rouge' 3.8-litre V6 560bhp version — that takes its name from the famous F1 Spa circuit — has recently been displayed at various shows and motoring events.

Spec levels are SE, Premium, Sport, S Hybrid and, primarily for business users, Executive and Premium Executive. Hybrid versions use an automatic transmission while diesel models offer a choice of manual and automatic gearboxes. Prices range from Ł27,950 to Ł41,815.

My Infiniti experience was with the current best-selling Q50 model, the 2.2D Auto Premium priced at Ł31,900. It's an alternative to the volume-selling BMW 3-Series, Audi A4, Mercedes C-Class, the VW Passat, and Volvo S60 — so exclusivity could be the major appeal of the Q50.

The four-door Q50 Saloon, with its coupe side profile styling and powered by the 2.2-litre turbodiesel with a seven-speed autobox (both with Mercedes-Benz lineage), will appeal to high-mileage users who like to travel in some luxury and comfort.

The engine sets no new standards in this executive sector — in fact it is still only Euro 5 compliant so it will soon need updates to meet the 2015 Euro 6 emission regulations.

It grumbles audibly on cold start-up but once underway is quiet. With 167bhp, but more importantly a high torque output of 295lb ft from 1,600rpm, it offers linear and responsive performance right through its rev-range, all smoothly delivered to the rear wheels through the seven-speed auto. Occasionally the gearshifts felt on the slow side but then we have become used to the snappier performance from the latest twin-clutch automatics.

Top speed is 143mph with zero to 62mph acceleration taking 8.5 seconds, which is a shade slower than most of its rivals. In common with the competition, the Q50 has a driving mode selector providing Standard, Snow, Sport and Personal settings that can be applied to the car's performance. I actually felt Standard to be the best driving mode.

The Q50's fuel economy and CO2 emissions set no new standards for the class: the diesel engine officially returns 58.9mpg in the Combined Cycle but on my test covering town, country and motorway routes, the real-life figure was 46.3mpg — not too shabby given the car's relatively heavy weight (1,750kg) which is also significantly more than that of its main competitors.

With regard to emissions, the official figure is 124g/km which means no road tax for the first year and then Ł110 for the second year onwards; both more than the BMW 320d and Merc C220 CDI. For company car users this means a Benefit-in-Kind tax of 20% (more than the 18% of the BMW, Merc and Volvo S60) although the same as the Audi A4 2.0 TDI auto and 2% less than the VW Passat 2.0 TDI.

As for ride comfort, Yes, the Q50 impresses in that department and felt well balanced with its front engine and rear-wheel drive layout. Americans like a quiet and comfortable ride from their sedans, and the USA is Infiniti's best-selling market but even so the road noise intrusion for a car of this perceived quality is too high — the culprit may have been the optional 18-inch wheels fitted to my test car although it could also have been down to the run-flat tyres that are fitted to all European models.

Breaking away from the usual hard-edged European styling lines, the Q50 is big and more curvaceous and, to some extent, imposing and classy — and an alternative to the rep-mobile image of the fleet-friendly BMW 3-Series and Audi A4.

Inside, the classy upmarket theme continues with a comprehensive array of equipment. With the Premium spec it has most of the key kit including comfy leather-upholstered seats. While it's roomy in the front, it's slightly short of legroom in the rear and the centre rear passenger will have to put up with the transmission tunnel intrusion.

The 'twin cockpit' fascia design includes two touchscreens, numerous controls and switches that look a bit too much 'gadgetry'. Sometimes less is actually more. Not included as standard is SatNav, even for this grade of model.

Looking to be different from buying or leasing one of the mainstream premium German brand models offers no price advantage for the Q50. However, core reasons to buy include plenty of standard specification (but still with plenty of options to suit your budget), and a comfortable front cabin.

Downsides include the very small UK dealer network (nine Infiniti Centres although a tenth is currently under construction in Newcastle), noisy engine on cold start-up, road noise intrusion; and it's not as dynamic to drive as, say, a BMW 320. But then, what price rarity value? — David Miles