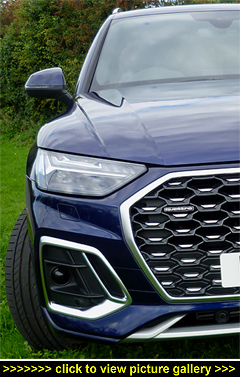 “First came the SUVs, bewitching
drivers everywhere with their ‘do
anything, go anywhere’ appeal.
Now comes the second wave of
must-have sport utility vehicles,
epitomised by the likes of Audi’s
Sportback. Not only do these new
coupe-ified interpretations look
more dynamic, but they’re also
primed to drive better too...”

MILLIONS OF DRIVERS love their SUVs — even the 'boxy' ones. And indications are that they're already even more smitten by these refreshing new variants with coupe-esque styling. And for anyone willing and able to spend between Ł46K and Ł60K to park one on their drive, the Sportback's Ł2,500 premium over a trad-look Q5 is no barrier at all.

While most SUVs look tough enough to be Dakar-rally contenders, the majority of them will live out their lives running on nothing more challenging than tarmac. So injecting more dynamism and verve into the on-road driving experience can only be a good thing. And that's exactly where the Sportback variants come in; delivering snazzier looks allied to SUV ruggedness while still providing more space and versatility and driving better than many a conventional car.

Style-wise, what's not to like? Seen in your rearview mirror, the Sportback's nose, with its trademark honeycomb single-frame grille, could belong to a regular Q5 SUV. However, as it overtakes, you'll definitely spot the differences: the swoopy coupe-esque glasshouse and sportier tail treatment that make it oh-so-slinkier than a regular SUV. So you won't be surprised to learn then that, although only being on sale in the UK for a few months, take-up of the rakish Sportback already accounts for four in ten Q5 sales.

Spend a week in a Sportback's company and you'll get it, and come away impressed by its likeable nature and sheer everyday usefulness. Climb aboard through the big doors and you'll instantly feel everything is right in your world — the interior is beautifully fitted-out with top quality materials and classy trim and confirms all you've read or heard about Audi's elegant blend of well-fettled luxury.

And thanks to plenty of room (including a fist-and-a-half of headroom even with the seat jacked up) and plenty of seat adjustment, whatever your body type, you'll find it easy to make yourself exceedingly comfy in the firmly cushioned sports seats, upholstered in grey leather and textured Alcantara, that are as supportive and relaxing on long journeys as when you're just popping out to pick up a takeaway. Both front 'chairs' also get quick-to-warm three-stage heating, extending under-knee support and power lumbar adjustment for an even better feel.

For those who appreciate a shipshape cabin there are plenty of storage spaces including a deep box under the sliding and height-adjustable central armrest, with a handy bed your smartphone can call home while it's being wirelessly charged, large siamesed dual-use cupholders, a decent-sized glovebox (usefully, it's lit, lined, and lockable), plus big, bottle-friendly door bins front and rear.

Today's 'must haves' have progressed beyond big alloy wheels and soft leather interiors. Buyers now demand top-spec comms — and the Q5 Sportback delivers, not just with its free-standing, crystal clear, 10-inch central touchscreen, but with its widescreen 12.3-inch Virtual Cockpit display directly ahead of the driver. Add to that straightforward multifunction controls on the steering wheel, and a comprehensive voice command system (triggered simply by saying: 'Hey, Audi'), and you rarely need to look away from the road. Great too is the ease with which you can locate filling stations or car parks using the MMI navigation system. Equally helpful is the online traffic information which can display highly detailed, real-time information on the traffic situation, obstacles, and the state of traffic jams.

Audi Connect also brings you Amazon's Alexa — 'she' is fully integrated and provides access to Alexa functionality through use of the Voice and MMI controls. She's easily controlled using the same standard commands as Amazon Alexa in the home — start any request with: 'Alexa…' And use her for, amongst other things, Smart Home control, Amazon Shopping, Knowledge (sports, movies, quizzes, etc), and access to streaming services for Amazon Music and Audible and Kindle audio books.

The driver's full colour digital instrument panel is one of the best, the customisable information is flawlessly presented — taking in road speed and anything else you fancy from active 3D navigation mapping, radio/media information, driver assistance systems, to all MMI functionalities (telephone, car settings, etc) — so the driver never feels overloaded.

Smartphones matter! And mobile integration is assured by Apple CarPlay and Android Auto. Other plusses include keyless entry with keyless Start, a four-zone climate system that's operated by real knobs and buttons (so much better and infinitely less distracting than trying to tap a screen while on the move), parking sensors and camera (our test car was fitted with the optional 360-degree system that provides seven different views: front, rear, corners, and sides, as well as a brilliant bird's-eye view that makes shoehorning the Sportback into a tight bay an absolute doddle), a quality sound system, powerfolding (auto and on demand) heated and automatically dimming door mirrors, one-shot power windows, auto-dimming rearview mirror, powered tailgate, and an electric parking brake with auto-hold (a godsend in stop-start traffic).

Safety kit includes core essentials such as Audi Pre-Sense that uses a camera to detect vehicles and pedestrians ahead — if an imminent collision is detected at speeds up to 52mph, the system first warns then will, if necessary, initiate emergency braking. Matrix LED headlights with dynamic indicators are also standard equipment as too is cruise control with a speed limiter, auto lights, rain lights, and automatic dip/main beam switching.

Measuring 15' 4" nose to tail, the Sportback is a fully-fledged four/five-seater. Access in and out is a breeze thanks to rear doors that open wide, a tall roofline, and the seating's higher hip-points. Adults can very happily sit behind a six-foot driver or front passenger while enjoying generous amounts of legroom, a fist of headroom (despite the sloping roof), and real comfort from the contoured outer 'chairs'. While three-side-by-side in the back is on the menu, two adults sharing the rear cabin will feel very indulged indeed.

If you plan on using the Isofix child seat anchor points on the two outer rear seats (also fitted to the front passenger seat) you'll most definitely appreciate the Sportback's raised ride height which makes light work of fitting child seats and strapping their users into them. Youngsters and adults alike will appreciate the large windows and the rear cabin's airy feel.

And if you regularly mix-and-match luggage and people, then note that sliding and reclining rear seats are optional (they also enable an extra 20% of boot space). In addition, there are central air vents, cupholders integrated into the drop-down centre armrest, large door pockets, net seatback pouches, and a nicely padded centre armrest with pop-out cupholders.

Sportback models come with a tauter sport suspension (adaptive dampers and air suspension are worthwhile options) so right from the get-go these sportier variants are more engaging to drive than the regular Q5. Admittedly the sport suspension brings a firmer ride, but the Sportback demonstrates that the trade-off doesn't have to be too one-sided. Audi's engineers have finessed the ride:handling equation very effectively; so much so that those travelling in the comfily supportive rear seats can bask in the relaxing and quietly refined cabin ambiance as they ride along (even when rolling on 20-inch low-pro rubber), while up front their 'chauffeur' can smile to themselves as they relish the tangibly focused dynamics. Definitely a win-win.

In fact, those with a need for speed won't be disappointed — put the ally pedal to the metal and you'll find the dynamics underpinning the Sportback bear out its sportier lines. Add in some superior grip, courtesy of the standard-fit quattro on-demand all-wheel drive, and you won't be surprised to discover that when you show your Q5's nose some fast and twisty B-roads it's more than keen to show off its pace; it reacts fluently to the helm, is easy to place, and feels engagingly confident whenever, and wherever, you're pressing on. And let's not overlook that often unsung component of any competent handling set-up — the brakes: the Sportback's are first-rate; progressive and powerful however hard or soft you press down, with plenty of reassuring bite.

With a more than ample 261bhp under the bonnet, the Sportback has all the oomph you'd expect to match its looks. The petrol-drinking TFSI engine is a four-pot 2.0-litre with a mild hybrid system built in and, thanks to the 273lb ft of torque on tap between 1,600 and 4,500rpm, doesn't need working hard. It's eager to rev and agreeably unruffled right from the moment you pull away — but put the boot in and it gifts you impressive point-and-squirt action.

Top speed is limited to far more than you're ever likely to call on: 149mph. More relevant, the S line model reviewed here needs just a smidgen over six seconds to pass the 62mph post from standstill (6.1 actually). That's pretty good going for its weight and while officially the combined cycle fuel consumption is given as 32.5mpg, over the course of a week's enjoyably brisk driving we recorded an average of 35.9mpg. Given the performance, few will grumble about that.

Audi's Drive Select is also standard and, left to its own devices in Auto, progress is quick and unflustered courtesy of the seven-speed, dual-clutch S tronic autobox making up the other half of the powerplant. Other driving modes include Comfort, Dynamic (perfect for when you're getting a move on along demanding roads), and Offroad, while Individual lets you customise the driving experience to suit you.

The autobox's perforated leather palm-fitting knob also allows instant toggling between Drive and Sport; tap it to the left and you'll be in manual mode which you might prefer if you're towing. Paddle-shifters on the wheel's horizontal spokes give you yet another option for managing the power. Another helpful feature: pressing the Park button incorporated into the selector knob not only engages Park but also applies the parking brake for you.

Raise the hands-free powered tailgate and you'll be presented with a big boot that sits at a convenient height above the road. The 40:20:40-split rear backrests fold down to form a seamless loadbay. If you choose the range-topping trim which brings air suspension, your Sportback can be lowered by 60mm for loading, for which your pooch — and your back! — will be grateful. Admittedly, going for the Sportback over the 'boxier' Q5 costs you in luggage space: but only 40 litres, so no big deal — and you still get an easy-to-stuff 510 litres. If specced, the optional sliding (by six inches) rear seats can create an extra 60 litres of boot space, as well as providing reclinable rear backrests and a very large load-through section.

Go to full loadbay mode with the rear seatbacks folded down (you'll find convenient release levers in the boot) and the sizeable 1,480 litres at your disposal means there's no compromising on practicality or versatility. Add to that the ability to tow a braked 2,400kg and for most owners, particularly sports enthusiasts or active weekenders, that makes it game, set and match to the Sportback.

Both to own and to drive, the Q5 Sportback is a very rewarding SUV. With a classy high-riding cabin that you'll be keen to spend time in to serving competently as a four-wheel drive 'wagon' with an assured ride and space for the family, the pooch, and the luggage, it ticks all the boxes. Throw in plenty of driving enjoyment and it's clear that Audi's new coupe-SUV Sportbacks are here to stay! ~ MotorBar