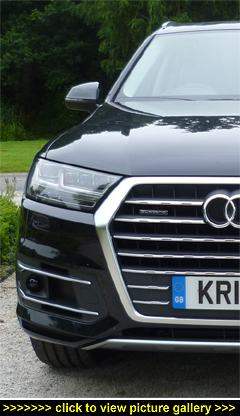 “Q is a particularly fortuitous letter
for Audi — with half a million of
the previous model sold, the all-new,
lighter but still unflinchingly luxurious
seven-seater 4x4 Q7 looks set to
perform even better...”

PREMIUM IS A WORD bandied about by marketeers like a shuttlecock, often to 'sex-up' aspiring brands rather than describe already established premium marques, but applied to Audi's Q7 SUV it's right on the money — every inch of this toned-up all-new version has 'premium' written all over it.

And while its sleeker and amazingly trim-looking body is a couple of inches shorter, it's still an unashamedly big seven-seater: 5,052mm long, 1,968mm wide, and standing 1,741mm tall. It's also 325kg lighter.

Despite the remarkable weight loss (equivalent to three-and-a-bit world class rugby players), it's not all skin and bones — it still weighs-in at around two tonnes — and the lost pounds have effectively been traded for tangible dynamic benefits. There's also increased road presence. Seen in a rearview mirror its larger, predatory chrome front grille, flanked by signature daytime running lights, is enough to prompt most other drivers to move quickly out of its path even when it's not pressing but just keeping station with them.

Something that's not so daunting is the price — even though it's packed with sophisticated driver aids and connectivity features and is superbly built, one can be parked on your drive for Ł50K; Ł50,340 buys an 'entry-level' SE, which makes the top-trim S line versions something of a bargain at Ł53,835. And, more good news, staying closer to a Ł50K budget doesn't mean you miss out on the Q7's impressive infotainment and connectivity equipment.

However, if green's not your colour and you like dragon-fire in your SUV's belly, then there's the SQ7 — the 429bhp SQ7 is the UK's fastest, most powerful diesel SUV, running to 155mph and sprinting to 62mph in a breathtaking 4.9 seconds.

Not that sticking with the non-S model is any hardship because occupying the engine bay is one of Audi's scrummy 3.0-litre V6 turbodiesels — and it can be had in either 215bhp or 268bhp guise. Audi's quattro four-wheel drive system is, naturally, standard-fit with power being sent to all four wheels as required via a silky-smooth, fast-changing eight-speed tiptronic autobox (the technically-minded will be pleased to know that there's also a proper centre diff as well as a limited-slip diff between the rear wheels).

Slimmed-down it might be but there's nothing 'lightweight' about the Q7's power — 268bhp and 442lb ft of 'grunt' makes it keenly responsive to the commands of your right foot. It's as quick off the mark as you'll likely ever need, thanks to peak torque being on tap from just 1,500rpm — 0-62mph is despatched in a sportscar-bashing 6.5 seconds; flat-out you'll see 145mph.

After an entertaining week behind the wheel, mostly in Comfort mode with regular smile-inducing splurges in the rather addictive Dynamic, real-life economy over 500+ mixed miles (many of them on twisty country roads) saw an average of 37.3mpg. CO2 emissions of 153g/km mean you'll pay Ł180 a year road tax — neither figure seems at all unreasonable for what you get.

While it's merely coincidence that there's a '7' in the name and there just happens to be seven seats, part of the Q7's appeal will be its genuine seven-seater capacity. Delivering that is a third row of two individual seats that conveniently powerfold out of the floor.

Kids will trample all before them to sit there but even adults of average built will find them big enough for shorter trips, encouraged by the fact that the Q7's roofline provides decent third row headroom.

A generous three-metre wheelbase guarantees limousine grade legroom for three individually-seated middle row passengers; the 40:20:40-split seats are both shapely and comfortable and each slides fore/aft for maximum versatility whether it's cargo or peeps you're prioritising.

The multi-angle adjustable seatbacks ensure three adults will be perfectly at ease but two can share the wide centre armrest and travel in proper luxury while enjoying fine views out of the deep side windows and as much sunshine as they like through the panoramic glass roof. For blue sky enthusiasts the front section offers one-shot-op tilt-and-slide access to real unfiltered air.

Other major plusses are the huge amount of legroom and big wide door bins that swallow bottles as well as dedicated row-two climate controls and air vents. Volvo's all-new seven-seat XC90 has been much praised (and deservedly so) for its fabulous cabin, but Audi is a past master at the game and it shows — when it comes to serving up premium cabin ambiance, it takes the biscuit.

Unexpectedly, even with the third row seats in play there's still 295 litres behind them for luggage. Press the button to fold them out of sight and the Q7 becomes a generous five-seater with a massive 770-litre conventional boot. Go one stage further and drop the middle row seats too and the all-of-a-level cargo bay expands to a vast 1,955 litres accessed with ease through the power-operated wraparound tailgate.

Load-lugging need not stop there because the Q7 takes towing in its confident stride and it won't raise a sweat not even when pulling its maximum braked 3,500kg (2,800kg with the steel spring suspension). Worth noting, too, is that air suspension models can lower the floor (via convenient height control buttons in the luggage compartment) for even easier loading.

What attracts buyers in droves to the Audi brand are the interiors and customers handing over their money for a Q7 will be totally satisfied — and then some. Design-wise it's a peach; quality-wise it's as good as it gets.

No matter how big and bold tablet-style touchscreens might appear, putting the whole package directly in front of the driver is an inspired touch that is just so much better than anything else. For the record you still get the standard display that rises up out of the central fascia so you have choices of what's shown where.

In the time it takes to tap the View button on the steering wheel the driver can toggle between a 'trad' view with high-quality digitised dials flanking an information window to the same but smaller dials overlaid on a full-width map.

Ensuring the driver is as fully informed as possible with the minimum of distractions from the real business of driving, the head-up display projects current road speed, traffic signs (including posted and temporary speed limits) and driver assist and navigation messages onto the windscreen into the driver's direct field of vision.

Apart from the comprehensively multifunction wheel with its paddle-shifters, the Q7's control hub is the broad centre console physically segregating the driver and front passenger; there you'll find a large MMI touchpad ahead of the infotainment rotary controller for fingertip inputting of telephone numbers and addresses. Bordering it are eight shortcut buttons for the touchpad functions as well as four more for direct MMI menu 'jumps'. Also sited here are the gear selector, electronic parking brake and a pair of large cupholders.

As befits its 'premium' persona the new Q7 comes appropriately kitted out — too much to list here but the highlights include 4-zone automatic climate control, a refreshingly straightforward SatNav and infotainment system, head-up display, in-car internet-based services via a 4G connection, and a mobile Wi-Fi hotspot enabling those on board to go online using handheld devices.

And then there's the Q7's fabulously accommodating seats — our test car's were upholstered in silky soft leather; every-which-way power-adjustable front seats also had 3-stage heating and 3-stage cooling, power lumbar and extending front seat cushion, power adjustable bolstering (in/out for that ideal 'embrace') and two memory recall settings. Not only that but they're surrounded by space: room for your head as well as more than enough shoulder, elbow and legroom for a six-footer front passenger to stretch like a cat.

You can also correctly assume that the driving position is absolutely spot-on, with excellent visibility from behind the sporty four-spoke multifunction wheel (with a very tactile, smooth matt black leather rim) in all directions — even if it didn't come with audible parking sensors and a rearview camera (which it does) you could slot the Q7 accurately and easily into any parking bay first time, every time.

Another thing you don't go short on in the Q7 is valuable driver aids. Standard-fit systems are comprehensive and include the multi-choice ride and handling modifying Drive Select that lets the driver swap driving modes in an instant — tap the switch on the centre stack to toggle between Auto, Comfort, Efficiency, Dynamic, and driver-set Individual.

De rigueur today for all premium-badged cars are so-called 'pre-sense' systems. As expected, the Q7's version is a high-tech one that visually and acoustically warns of the risk of a collision both with pedestrians and vehicles ahead followed by partial or full braking depending on circumstances.

More impressively, the system also calculates if an appropriate evasion 'lane' is available and applies supportive steering to aid the driver in making use of it. Even better, the Q7's system also works when you're turning at crossroads: from the moment the indicators are activated the system detects approaching vehicles and, if necessary, applies braking to help avoid a collision.

Other prime 'assists' include hill descent control to automatically govern the Q7's speed when descending steep terrain off-road, a hill hold function integrated into the electronic handbrake, Adaptive Cruise Control (automatic distance regulation with automatic braking and accelerating at speeds up to 155mph), Traffic Jam Assist (reads the road ahead and, if a hold-up is detected, assists with the braking, accelerating and steering) and, essential on today's crowded roads, Traffic Sign Recognition which warns if you exceed permanent or temporary speed limits.

Also fitted to our press car was the optional electronically-controlled air suspension — continuously adaptive damping on all four wheels that automatically regulates the ride height and suspension. It also adds two more driving modes to the Drive Select rota: Allroad and Lift/Off-Road — Allroad increases ground clearance by 25mm above the standard ride height; and by 60mm in the Lift/Off-Road setting.

Running on 'air' (suspension), the Q7 wafts congenially along whatever the state of the tarmac. Reassuring to know, too, when the ride is so unruffled, that out of sight the quattro all-wheel drive is providing all the grip needed whatever the road quality or weather conditions.

The tiptronic automatic transmission is an eight-speeder so there's always a perfect gear available — progress in town is über-smooth and admirably fluent. The square-ish, palm-fitting selector knob offers both Drive and Sport modes although the steering wheel's paddle-shifters are what you intuitively go to. Sport mode is brilliant; unleashing some rather startling get-up-and-go, and perfect for drama-free, point-and-squirt overtaking.

Between them, the turbodiesel and tiptronic autobox endow the Q7 with a very satisfying eagerness but one that's always at ease with whatever pace you to choose to set; on motorways it cruises with a superbly muted and serene effortlessness that, literally, makes time fly on long trips.

This classy next-generation Q7 is hugely impressive to travel in; while you're lounging in its roomy, luxurious, refined and almost cathedral quiet cabin it will cover huge distances before delivering you to your destination feeling fabulously refreshed and amazingly more at ease than when you first set out ~ MotorBar