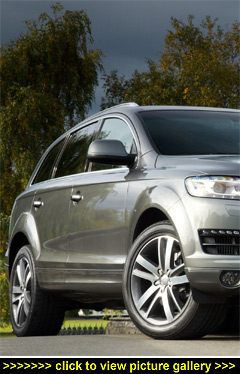 “From the moment it hit the streets,
Audi’s Q7 performance SUV jumped
to the top of its segment. Now Audi
has made its sporty, comfortable,
high-performance SUV even better:
more refined, more elegant and,
in new 3.0 TDI Clean Diesel guise,
it showcases the world’s cleanest
diesel technology...”

DESPITE ITS 'CLIMB EVERY MOUNTAIN' appearance, the Q7 is principally bought and used as an on-road machine. And Yes, at 16.7 feet long, 5.7 feet high and 6.5 feet wide it is a big car — but not monstrous, as it has been dubbed by some in the media. It certainly doesn't feel that big from behind the wheel and, rather astonishingly, it doesn't behave like a huge car, either.

It's a self-evident truth that it's in everybody's interest to do their bit to 'save the world' — well, make it a cleaner place, at least. Audi is far ahead of the curve with its Clean Diesel response to the stringent new Euro-6 emission regulations that are set to take effect in 2014 and which will make all oil-burners use an additive called AdBlue. Thanks to AdBlue, and some engine management changes, smog-generating nitrous oxide emissions are cut by 90%. For once, a positive case of man-made extinction!

The Q7 3.0 TDI Clean Diesel is the first low-NOx diesel to be offered in the UK — and the first to use AdBlue. Stored in a 23-litre tank (enough to last for around 20,000 miles), the AdBlue additive is sprayed into the exhaust gases just before they enter the catalytic converter. This changes the potentially dangerous nitrogen oxide gases into harmless nitrogen and water. As far as the driver is concerned, this is a no-worry feature because the AdBlue is topped-up whenever the car is serviced.

During our week with the Q7 we averaged 28.9mpg, much of it in heavy city traffic — the official urban consumption figure is 25.9mpg. The consumption gap closes on the extra urban cycle with 40.9 for the 3.0 TDI Clean Diesel vs 42.2mpg for the standard 3.0 TDI. Whatever, forty to the gallon from anything the size of a Q7 is definitely something to shout about and it's easy to see why the 3.0-litre TDI is where the smart money goes.

Apart from the cutting-edge NOx-reducing technology, the Clean Diesel version is much like any other Q7: its 'footprint' is still substantial but, thanks to some mild styling tweaks including new trademark Audi LED driving lights, revised grille and bumpers and redesigned tailgate and LED rear light clusters, the 'refreshed' Q7 boasts 'handsome brute' looks.

When it comes to passenger carrying duties, Audi's SUV is ready to deliver and, as you'd expect given the 9.8-foot wheelbase, is amazingly roomy for four/five. It can be had as a five or seven seater (or even, as an extra-cost option, with seats for six; this comes with comfortable, longitudinally adjustable, individual seats in the second row).

The middle-row bench slides fore and aft by four inches to share out leg — or load — space as necessary between the middle and third rows. The second-row backrest angle is adjustable through nine degrees and it features a 40:20:40-split arrangement; the middle section doubles as an armrest with retractable cup holders and also folds down to make a load-through for long objects.

The rearmost pair of seats are a bit of a squeeze, but still better than those offered by the Q7's rivals, and do offer decent comfort but they're best for children or adults on short trips — Audi recommends that they're used for persons no taller than 5.25 feet (1.6 metres). That noted, we did manage a journey with a near-six-footer travelling back there with no complaints other than about the limited foot room.

These rearmost seats fold easily into the boot floor to maximize load space — there's a huge 775 litres in five-seat mode; maximum cargo space is a vast 2,035 litres. Going the other way, even with all seven seats in use there's still a practical 330 litres of boot space available for luggage. The power-operated tailgate is a nice touch, as is the 'loading' button just inside the boot — press it, and the body drops several inches for easier loading. A loadbay 'racking' system is also included, as is a hidden luggage compartment beneath the boot floor.

Climb aboard the Q7 — not a problem as the seat base is just the right height from the ground for you to easily perch and swivel in — and you won't be in the least surprised to find yourself seated in an elegant and beautifully-appointed cabin: luxurious every-which-way power leather seats with power lumbar adjustment, 6-stage heating and extending under-knee support are complemented by soft-touch upscale trim and chrome / aluminium detailing to the switchgear; fit and finish is first rate and well up to Audi's usual high standard.

Optional kit includes a DVD SatNav (instinctively easy to work from the very first time you use it), panoramic sunroof (genuinely panoramic: it extends over all three rows of seats), adaptive cruise control which uses radar to maintain the distance from the preceding vehicle throughout the speed range and Audi Braking Guard that gives a two-stage warning of an impending rear-end collision.

Also available is Audi Lane Assist (helping the driver stay 'in' lane) and a parking system that uses a camera to assist the driver in backing up, parallel parking or hitching up to a trailer. There's also a clever anti-blind-spot radar that detects overtaking traffic and alerts the driver through LEDs built into the door mirror housing, and cornering lights. Plus, of course all the usual 'toys' including very advanced assistance and infotainment systems to personalise your Q7.

The driving position is absolutely spot-on with first class ergonomics; making things easier is a single rotary knob for controlling the SatNav (brilliant 3D graphics and sensibly sited at the very top of the centre stack), impressive Bose stereo and air-suspension functions with easily identifiable buttons bringing up menus for each system on the large colour screen. The multi-function steering wheel is leather-wrapped with perforated leather used for the work areas and the horn sounds great: not too sharp but nonetheless commanding without being aggressive — you'd be surprised at how many cars have weedy-sounding horns.

The dash is as ergonomically correct as it is attractive, with two tear-shaped nacelles. Graphics are stark white on black and crystal clear. A large digital numeric display makes sure you're always aware of your road speed and is the next best thing to a head-up display. Switches and controls all have that 'engineered' feel that adds to the ownership experience on every journey, however short. Rear vision is limited but there are audible parking sensors (front and rear and the driver can customise the tones, making them distinctly different) as well as a visual on-screen schematic.

We were expecting an electronic handbrake but not the foot-operated parking brake fitted — that said, it's straightforward and easy to use; in fact, a lot of drivers still prefer a physical handbrake of some sort.

Pull away and, as you'd expect with this class of car, the Q7 central locks itself automatically. You'd also expect dual-zone, climate control air conditioning, which is just what you get and it works powerfully; it does 'super-cold', which was exactly what we needed during our test week when external temperatures stuck around 30 degrees Celsius. On demand power-fold mirrors and a self-dimming rear-view mirror are also standard and there's a decent amount of storage space from the large chilled glovebox to the accommodating door pockets.

The ride is more than acceptable, especially so for an SUV; soothing and well-damped. And it's even better at motorway speeds. There might be a powerful turbodiesel unit working away under the bonnet but whichever seat you occupy in the Q7 you won't be disturbed by it. Overall refinement is excellent and even wind noise is non-existent, a benefit of the new, smaller mirrors designed to cut down drag and the smooth nose and adaptive, self-lowering suspension that together ensure the Q7 cuts cleanly thought the air at speed. Without doubt motorways are its forte and the Q7 cruises them sublimely.

Let's be honest — dynamic handling from a machine as big as the Q7 is not something you'd expect. But get behind the wheel and you'll quickly find that, courtesy of its air-suspension / electronically-controlled shock absorbers, the Q7 can certainly hustle. Select Dynamic ride mode (the choices are Comfort, Automatic and Dynamic) and you'll quickly discover that the Q7 is extremely agile for such an outsized vehicle.

Yet the overall driving experience is startlingly good; body roll is well controlled and, thanks also to precise steering, the Q7 can be pushed through bends with both dignity and composure. Equally reassuring, and very effective, are the brakes: massive vented discs all round deliver press-and-you-stop-NOW braking. The smart 20-inch, 5-spoke alloy wheels fitted to our test car wore 275/45 Yokohama Advan Sport tyres. Specifically designed for high speed driving and stability in high-powered sports cars (Porsche and Aston Martin), they did a fine job of combining grip with comfort.

About the only thing that you really need to come to terms with is the Q7's girth: most parking spaces will require the door mirrors folding in and with mirror-tip-to-mirror-tip measuring just over seven feet, barrelling down country lanes is definitely not for the fainthearted.

The ground clearance also varies with speed. When the Q7 exceeds 99mph for a specified length of time the body lowers from the normal 180mm (7.1 inches) in two steps to 145mm (5.7 inches) for maximum stability and aerodynamics.

The payload, incidentally, does not affect these levels — the adaptive air suspension also operates as a high-tech level control. And in the sporty driving mode, especially on country roads, dynamic roll control helps maintain lateral stability by selectively increasing the damping forces.

The air-suspension system couldn't be any simpler to use: at any time the driver can, via the Multi Media Interface (MMI) operating system, select any of the three different on-road modes; each varies the characteristic curves of the pneumatic springs and the dampers depending on the dialled-up mode and the driving speed.

When taking the Q7 off-road, there are two additional choices: Off-road mode (for speeds up to 50mph) increases the ground clearance by 25mm above the normal level, to 205mm (8 inches); and Lift mode (up to 25mph) lets the Q7 clear large obstacles thanks to a useful 240mm (9.5 inches) of ground clearance.

A six-speed tiptronic automatic transmission is standard — and it serves up consistently smooth shifts. There's a Sport setting too and, for hands-on driver control, manual changes can be made using either the selector lever or the paddle-shifts on the steering wheel's horizontal bars. And don't forget that all-weather traction is faithfully looked after 24/7 by Audi's legendary quattro permanent all-wheel drive system. For the record, during normal driving power is distributed to the axles with a modest emphasis towards the rear.