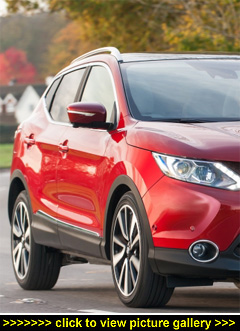 “Can the second-generation 2014
Nissan Qashqai propel this best-
selling crossover even further up
the sales charts? On the evidence
of our road test, the answer is Yes!”

I ALWAYS THOUGHT THE NAME QASHQAI was a bit odd. But now I think I understand it: pronounce it like Margo Leadbetter would and it sounds exactly like 'cash cow'. If you just said 'Who?', Margo Leadbetter was the posh 'n' prim glamazon in the hit 70's BBC's sit-com The Good Life, brilliantly played by actress Penelope Keith.

And a cash cow is exactly what the Qashqai has been for Nissan — over two million examples have been sold since its launch back in 2007, of which 250,000 have gone to UK customers. Indeed, the Qashqai is one of very few cars that can claim to be truly British: designed in London; engineered in Cranfield; built in Sunderland.

Whatever others claim, the Qashqai owns the whole 'crossover' gig. Back in 2007 it was the very first Golf-sized car to blur the boundaries between regular hatchback and 4x4 SUV. In fact, Nissan ceased to offer a conventional mid-size hatchback at all and said, if you want a medium-size car, the Qashqai is it. And that remains the case to this day — the new Qashqai is Nissan's only contender in the Ford Focus class.

And you can't argue with Nissan's strategy. People have been lapping the Qashqai up in ever-increasing numbers, making it by far the most popular crossover model on the market. Now, seven years after the original launch, Nissan has a follow-up Qashqai — and it's the very definition of a tough act to follow.

The maxim 'if it ain't broke' has definitely been applied at Nissan. The new Qashqai looks very familiar: squint and it looks surprisingly like the old model, with a near-identical glasshouse and overall profile.

However, closer examination reveals a number of differences. The front-end is much sharper; full of bristling, muscular detailing with LED headlamps as standard. The roofline is lower; the wheelbase has been extended by 11mm; and the whole car is 47mm longer.

All of which has strong benefits in the cabin. Despite the lower roofline, headroom is actually better (thanks to a lower seating position) and there's loads of space in the back — only the centre rear seat feels uncomfortable but that's true of pretty much every car in the medium segment these days. Legroom front and rear is also improved.

The previous Qashqai came in five-seater and '+2' seven-seater versions, but the latter has been dropped with the new generation. What about boot space? That's bigger too, by 20 litres — boosting it to 430 litres. A clever, dual-height boot floor works very well indeed, and when you fold the seats you get a fully flat load platform.

Interior quality is notably better as well, with some far more attractive cabin materials than before. It may not be on a par with the VW Golf, but it's much better than the previous Qashqai.

So what's it like to drive? The entry-level engine is a 1.2-litre petrol, shared with the Micra. Surely a 1.2 engine isn't big enough to power the bulk of the Qashqai? Nissan is not alone in using small petrol engines in a big car: VW offers its seven-seater Touran with a 1.2 engine, and Ford's forthcoming new Mondeo will have a 1.0-litre unit.

Fact is, with a turbocharger on board, its 113bhp is plenty enough to hold its own in traffic. And it has decent pull in most situations courtesy of 90% of its torque being available from very low revs.

The only problems you may suffer from are two: emerging from a T-junction on a slight incline, where if you don't get the revs right — which means revving quite hard — it can take an age to get away from the line; and on motorway inclines, you may find you need to change down a gear or two to maintain your momentum.

The standard manual gearbox is a six-speed unit which, it must be said, is not without its problems. The change quality is notchy and the lever travel long, while on our test car we couldn't engage fifth or sixth gears at all.

Xtronic CVT automatic is optional, and works far better than the previous CVT system, which was very raucous under hard acceleration. The new Xtronic system solves this by switching to stepped changes when accelerating hard, and you can also opt to run the gearbox in manual mode if, for instance, you want to use engine braking.

The new Qashqai is based on an all-new platform, which is very good news as it's a very decent package. I wasn't a huge fan of the way the old Qashqai drove — it always felt dull and insipid to me.

The new one is in a different league, cornering way better than the old model. There is some body roll (almost inevitable with high-centre-of-gravity crossovers), but it's never uncomfortable. Once it's settled into its cornering attitude, it holds its line with confidence.

You can buy a 4x4 version, but almost nobody does (just 5% of Qashqai customers do) and no 4x4 models were available during my test drive; frankly, a regular front-wheel drive version is fine — and if you want snow-beating ability, buy a set of winter tyres. The steering — electric, of course — has a decent amount of weighting, and you can always put it into Sport mode to boost firmness.

All Qashqais feature Chassis Control as standard. This provides 'Active Ride Control' which uses the brakes to minimise body pitching; 'Active Trace Control' which also applies the brakes to mimic the effects of a limited slip differential to keep good traction and minimise understeer; and, on automatic transmission models, there's 'Active Engine Brake' which uses engine braking during cornering. The ride quality, too, is very good — stiff but compliant, and comfortable over a wide range of surfaces.

The new Qashqai is priced to undercut the equivalent VW Golf by a few hundred pounds. The launch range starts at Ł17,595 with the most popular model being the petrol-engined 1.2 DIG-T Acenta Premium (as reviewed here), although the 1.5 dCi diesel will run it close.

Other engines include a 1.6 dci diesel, plus a 1.6 DIG-T petrol arriving in September 2014. Nissan is quoting a residual value figure of 50% for the new Qashqai after three years — that's exceptionally good, even beating the rock-hard VW Golf, and means that PCP rates can be kept low (as little as Ł249 per month). The most economical model (the 1.5 dci) has CO2 emissions of 99g/km, so it's also very tax-efficient.

Could the Qashqai ever become a top-five best-selling car in the UK? To do that, it would have to displace the VW Golf. That's a tall order, but it's certainly not beyond the bounds of possibility. With the Qashqai driving much more impressively than before, as well as offering more space and enjoying much more modern equipment, I for one wouldn't bet against it. — Chris Rees