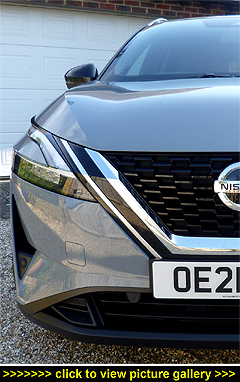 “With its evergreen appeal confirmed
by long-time sales successes,
Nissan’s latest Built-in-Britain
Qashqai comes with a ‘new improved
recipe’ that sees it remain true to
its roots as the UK’s best-selling
crossover...”

OFTEN WHEN YOU BUY something marked 'new improved recipe' it turns out to be no way as good as the original. Not so Nissan's all-new Qashqai which, in its latest third-generation incarnation, really does shine and satisfy. In a sense cars are tools — if so that makes the Qashqai a Swiss army knife because it multi-tasks with ease. No surprise then that following its summer launch, it's quickly regained the top sales slot as the UK's best-selling crossover.

So, how much is one Guv? Considering its swish looks and versatile range, not as much as you might expect. Putting one on your drive could cost as little as Ł23K (or as much as Ł37K for one of the range topping Tekna+ 4WD Xtronic versions). Tested here is the top-trim Tekna+ 2WD model — one of these well-specced beauties comes in at Ł36K. Even before you step aboard it looks worth every penny: Twenty-inch alloys wrapped in meaty rubber fit perfectly inside the flawlessly geometric and profiled wheel arches, and the bold V-shaped grille with futuristically slim LED headlight units nestling beneath the corners of the clam-style bonnet grab your attention.

Beneath the skin there's more to be pleased about — the bodyshell is now fifty per cent stronger although it's really no heavier courtesy of a weight-saving aluminium bonnet and doors along with a composite plastic tailgate. This sleek new Qashqai is also slightly bigger (around an Imperial inch) all round: length, width, and height (oh, and wheelbase, too). Again there's a silver lining: more well-utilised space equals more cabin room, especially knee-room for back seat passengers.

Under the bonnet Nissan have kept things uncomplicated. A turboed, 1.3-litre petrol-drinking engine which, by the way, incorporates a 12-volt mild-hybrid system, occupies the engine bay. It comes in two states of tune: 138 and 156bhp. Powertrains can be either a six-speed manual or a continuously variable transmission 'auto' which, courtesy of a new 'stepped' ratio arrangement, happily functions much more like a traditional autobox. Completing the drivetrain choices are both front- and four-wheel drive.

Qashqai trim levels are well structured. Starting with the entry-level Visia (Ł23K) that, despite being the 'entry' model, is specced with a full suite of safety kit including anti-collision tech with emergency braking, as well as lane-keeping, blind-spot warning, and parking sensors. The next rung up the spec ladder is Acenta Premium (from Ł26K). Above that sits the N-Connecta (Ł28K); and above that the Tekna (Ł30K). Top of the range is the Tekna+ model we've been driving this past week and which, with its cutting-edge looks boosted by a two-tone Ceramic Grey pearlescent paint job topped-off by a Pearl Black roof, attracted heaps of 'likes' everywhere it went.

Swing open a door and your first thought will be 'classy' — the shapely seats are faced with diamond-quilted premium black leather and once you're seated you'll find them immediately comfortable and supportive; the bolstering is minimal but perfectly effective with none of the problems getting in and out you can get with the OTT 'trackday-style' bolstering some rival carmakers mistakenly think is a good idea. Three-stage heated front seats are standard, each also with 3-mode massage functions.

The Qashqai's 'pilot' is especially well looked after with 8-way power plus 4-way electric lumbar adjustment as well as a driver's seat 'assist' function for effortless entry and exit. The leather-wrapped multifunction steering-wheel has paddle-shifters with an always appreciated heated rim. Add in the smart but nicely understated contemporary trim on the fascia, centre tunnel, and doors, and ambient lighting, and you have what we'd call a very welcoming cabin!

And the positive impressions don't stop there, because your second thought will be 'roomy'. Helped by a new dash design that emphasises the ample interior space, and the light flooding in through the panoramic glass roof (it comes with a one-shot 'blackout' sunblind), the Qashqai's interior serves up a satisfying home-from-home feel. Settled behind the helm, you'll like the lofty driving position (and the handy two-setting seat and mirror memory recall).

In fact, wherever you sit, you'll immediately feel at ease. And you don't just get one screen, but two: a large centre-of-dash touchscreen infotainment display plus a 12.3-inch crystal-clear digital instrument panel that offers easily personalised data to suit your needs while always showing the most important stuff: the posted speed limit and your road speed.

The main 'free-standing' nine-inch touchscreen sits nice and high, top-dead-centre of the fascia, giving it a brilliant and easy-to-see 'head-up' quality. And, like everything else about this latest Qashqai, it's simple to use with sharp graphics for both the infotainment features as well as the excellent SatNav with 3D mapping. Equally rewarding is the switchgear and controls — all straightforward and simple to use. Particularly useful are the stand-alone controls for the media volume and for zooming in/out of the active mapping.

Plus, you also get a proper head-up display directly ahead of the driver. It's a real boon with not just the current speed, posted speed limit, and cruise control info projected onto the windscreen, but the option of easily resetting it to show navigation, audio and SMS information.

Another big hit with drivers will be the logical heating and ventilation controls sited immediately below the central touchscreen that are a cinch to operate without distraction on the move. Interestingly, many drivers, even those who recently passed their tests in 'everything-with-your-fingertip'-specced cars, prefer their climate controls to be of the non-touchscreen kind. So, full marks to Nissan for taking note and fitting what drivers really want!

Also easy to use is the good-to-grip steering wheel with its non-reflective satin black finish; better still, all its multifunction controls are clearly marked plus there's voice control too, for phone, nav, audio, and to request information (ie; 'Go to 10 Downing Street', 'Find Starbucks', etc). The wheel-mounted paddles are for overriding the Xtronic autobox's shifts should you want to, say, when towing. Incidentally, using the D-Mode button (just aft of the stubby selector knob on the transmission tunnel) allows you to switch between any of the three driving modes: Eco; Standard; and Sport.

Refreshing, too, to find a new car that provides real-world in-cabin storage for all your stuff — the Qashqai does the job thoroughly with a large, deep glovebox that's also lit (plenty aren't!), a pair of decent-sized dual-use cupholders, spacious door pockets that really do hold a bottle, plus a big bin located between the front seats under the central armrest along with a dual-use open tray that serves as a bed for your smartphone when it's being wirelessly charged.

The rear cabin is also a restful place to travel. Your passengers (up to three of them) will enjoy plenty of personal space with more-than adequate head-, leg-, and foot-room along with comfy backrest angles. Also keeping them happy, in addition to the light streaming in through the glass roof and large side windows, is a central armrest with built-in cupholders, dedicated central air vents, bottle-holding door bins, deep seatback pouches, and USB jacks. The very wide-opening back doors don't just make it easy to get kids in and out of child seats (ISOFIX child seat anchorage points are fitted to the rear outer seats) but also enable hassle-free entry and exit for grown-ups too.

Handling-wise, this latest Qashqai will tackle whatever roads you point its nose at, be they arrow-straight motorways or convoluted country lanes, barrelling along with a reassuring grip and self-confidence underpinned by the independent rear suspension, accurate power steering, and strong, trustworthy brakes. All exactly what buyers of mid-sized, family-friendly crossovers want. Rolling on twenty-inch alloy wheels wrapped in 235/45 Michelin rubber that not only look the part but aid the dynamics, the Qashqai also serves up a decent ride. The suspension set-up is nicely fluent, and bumps are absorbed without impacting passenger comfort.

The 1.3-litre engine is a good fit with the Qashqai: its 156bhp and 199lb ft of torque — with a little help from its 12-volt mild-hybrid system — give it all the urge you'll need, and without disturbing those in the cabin. Effective sound deadening in the front bulkhead and door panels, and thicker windows in the rear doors, ensure the sound of the four cylinders working doesn't intrude.

Also a well-judged pairing is the turboed engine with the CVT automatic transmission — they're well matched and together make intelligent use of the power available in a pretty seamless way, even when running with a full load or whenever you need to spurt past dawdlers.

Top speed, at 124mph, is getting on for twice the legal limit so cruising motorways is a stroll in the park, while the benchmark 0-62mph figure comes in at a lively 9.2 seconds. The eye-opening surprise was the consumption — officially 43.8mpg in the combined cycle but we recorded an impressive 52.5mpg during our week's hard testing over mixed routes. Combined with a 12-gallon tank, that means a safe (and convenient) 500+ miles between fill-ups. Try doing that in an all-electric car!

The easy-to-load boot has two floor levels. With both full-width, lift-up and lift-out, wipe-clean floor sections (or 'luggage boards') set at their highest positions, the Qashqai offers a 436-litre boot with a large hidden underfloor storage area deep enough to squirrel away a lot of of kit. Load cover duties are provided by a large rear parcel shelf that lifts with the high-rising tailgate as it is opens (it's electric and operated helpfully via an in-cabin button, key fob, or controls on the tailgate itself).

The lift-out floor sections can also be used to divide the boot/loadbay horizontally (hence the 'luggage board' moniker) into two strongly defined zones: a pair of roughly equal-sized holding 'pens' in the boot proper; or a smaller rearmost with a significantly larger forward section when the rear seatbacks are folded down in loadbay mode.

The 60:40-split rear seatbacks fold down totally flat on to their bases, creating a seamless and level-floored cargo bay good of 1,379 litres. You'll be pleased to find a power socket, two boot lights, sturdy tie-down eyelets, and bag holders all present and correct. All-in-all, the Qashqai's boot/loadbay options provide a broad spread of carrying solutions. Externally, roof rails further extend your options. And if you're planning on hitching something up to the Qashqai's towbar, you'll be glad to hear it can haul a braked 1,800kg.

This is a hard-fought class with plenty of competent players jostling to be top dog — but this new Qashqai sits head and shoulders above most of its peers. A fine all-rounder that underpins its swish looks with a well-built robustness, Nissan's family holdall delivers in all areas from equipment and simple-to-use tech features, to comfort, versatility, and economy. The fact that it's made here in Great Britain is also wonderful news; and the affordable pricing the icing on the cake. ~ MotorBar