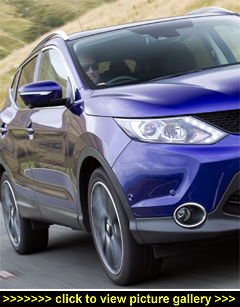 “Designed and built in Britain,
Nissan’s Qashqai is the UK’s best-
selling crossover — every day
another 1,200 of them roll off the
production line at the Japanese
brand’s Sunderland factory...”

ORIGINALLY LAUNCHED in 2007, the Qashqai started the crossover sector which combines SUV style (with or without 4x4 ability) with family hatchback design and an elevated stance on the road.

Since that time the crossover sector has grown to encompass both smaller and larger models and such vehicles now make up the third largest new car sales sector in the UK as well as the largest in mainland Europe. Prices of the latest Qashqai range — two petrol and two diesel engine options plus Visia, Acenta, N-Connecta and Tekna trim and equipment levels — start at Ł18,545 and top out at Ł28,990.


Most Qashqai models are front-wheel drive; 4WD is available only with the dCi 130hp turbodiesel engine (also available with 2WD). All versions are now pure five-seaters — the 5+2 variants are no longer available.

Petrol and diesel powerplants are expected to split UK sales 50:50, and it's reflected in the engine line-up: 1.2-litre 115hp DIG-T and 1.6 163hp (160bhp) DIG-T turbocharged petrols; 1.5-litre 110hp dci and 1.6 130hp dci turbodiesels. All engines have fuel-maximising Start/Stop fitted and, depending on the specification level, Xtronic automatic transmissions are available with the DIG-T 115hp petrol and dci 130hp turbodiesel units.

Like its Renault Kadjar 2/4WD crossover competitor (which also uses the same engines), the latest Qashqais use the Renault-Nissan platform — with the Kadjar being a shade less pricey.

Functionality has played a big part in the success story of the Qashqai because it is easy to drive, easy to use and relatively versatile with its seating and load carrying layout.

For instance, the load space has two reversible floor panels that can easily be raised or lowered, providing 16 possible configurations to either maximise luggage volume or provide a fully flat floor with the rear seats folded.

Additionally, the rear boards easily slot into a vertical position providing an ideal sized 'pen' for carrying shopping bags. Another neat touch is the load cover that fits neatly under the luggage floor, allowing bulky items to be easily loaded. The luggage boards feature a wipe-clean surface on one side and soft carpet on the other, so muddy boots can be transported without damaging the textile surfaces.

The Qashqai's boot has a capacity of 430 litres but with the rear seats folded flat this goes up to a substantial 1,585 litres — if that's not enough, the 1.6 DIG-T 163 has a braked towing capacity of 1,500kg so whether you're using it for family leisure, travel, or as a workhorse, it's very practical.

However, practicality alone does not sell cars; they have to look smart too, and the latest Qashqai looks fairly bland in that area although I think the Renault Kadjar has a little more styling flair both inside and out.

The clamshell bonnet design of the Qashqai comes out of the premium car brand league as do the flared wheelarches, rising waistline and sloping coupe-look roofline — yes, there's athleticism and SUV 'muscularity', but it lacks the edgy lines of its new-generation rivals.

Inside, the latest Qashqai models have an increased level of specification and connectivity features — important additions on a customer's must-have list.

What the latest Qashqai also offers is accessibility to premium brand technology and that is what today's customers want but at reasonable prices. Of course, there is a comprehensive list of extra-cost options so customers can tailor their Qashqai to meet their specific needs.

Not that my test car needed any additions. Showcasing the latest Qashqai, Nissan sent me the 1.6-litre 163hp DIG-T turbocharged petrol engine with manual gearbox and front-wheel drive with the top Tekna specification priced at Ł25,380 on-the-road. While this is Ł1,725 cheaper and more powerful than the Tekna 130hp turbodiesel, the petrol-powered 1.6's running costs will be slightly higher.

This new 1.6-litre engine replaces the old naturally-aspirated 2.0-litre petrol unit and it comes with the benefits of more power and more torque — plus it's cleaner and more fuel-efficient. For the record, top speed is 124mph and the zero to 62mph acceleration time is 9.1 seconds.

Other key figures to consider are fuel consumption — in the official Combined Cycle it's 47.1mpg. In real-life, my week-long test driving returned an average of 43.2mpg although on a longer motorway journey it did touch 47.4mpg because of its 'tall' fifth and sixth overdrive gear ratios. A slight penalty of these economy-boosting high ratios and a slow-to-react turbocharger is that acceleration response can be sluggish.

The engine develops 177lb ft of torque from 2,000rpm (which these days is a relatively high engine speed) so when travelling on winding country roads and commuter routes in traffic, for much of the time I found myself driving in fourth gear.

If you want acceleration to pass slower vehicles on the open road you need to change from sixth to at least fourth to get the revs necessary for the turbo to boost power. Such are the penalties of having high gear ratios for improved fuel economy and lower CO2 emissions.

So while the new petrol engine is more powerful and quieter in operation, it lacks the 'grunt', response and fluidity of the 1.5-litre 130hp dci turbodiesel — but then that engine considerably pushes up the price of the Qashqai in what is a very competitive and fast-growing market sector.

Competitors include the Renault Kadjar, Ford Kuga, Kia Sportage, Hyundai Tucson, Suzuki Vitara, Honda HR-V and VW Tiguan, to name but a few. And similar vehicles from SEAT and Skoda are about to hit the market.

For a long time the British-built Qashqai has been popular because of its overall packaging of must-have SUV styling, high equipment levels, competitive pricing and versatile seating, all bundled up in a compact 4,377mm-long bodyshell.

A good all-rounder, with a well laid out interior and quiet engine, it rides well enough and handles well enough; and that just about sums it up because it does most things well enough to justify its long reign as leader of the crossover pack — but the competition is now both more numerous and keener priced. ~ David Miles