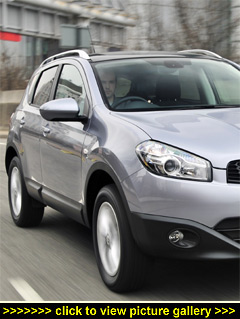 “Designed, engineered and built in
Britain, Nissan’s Qashqai blurs the
boundaries of SUVs, C-segment
hatchbacks and mid-sized MPVs —
and we Brits love them. David Miles
drives the new updated 2010 range...”

AROUND HALF OF NISSAN'S GROWING UK SALES are 'crossovers' and last year the five-seater Qashqai and seven-seat Qashqai+2 models achieved 25,776 UK sales. This year, with the arrival of the updated range, Nissan expects to sell 32,500 units — and even before they recently went on sale, 1,100 of the new models were ordered by customers.

The SUV design of the Qashqai proves that we love the looks of this type of vehicle but we also like the compact C-segment size and running costs and the multi-seat MPV interior design where passengers and loads (410-1,513 litres) can be carried with ease. Customers also like the elevated seating positions, car-like driveability and fuel-efficient engines.

The Qashqai range offers two- and four-wheel drive models although 95 per cent of customers go for the front-wheel drive versions and just less than 6,000 people opted for the seven-seat models.

The Qashqai also finished up ahead of the BMW 1 Series and the Audi A3, and that is impressive. Other competitors in the 'crossover' C-Segment are the new Hyundai ix35 and the very good Peugeot 3008.

There are four trim and equipment options: the base Visia version which takes 20 per cent of sales; Acenta 30 per cent; N-tec 40 per cent; and Tekna 10 per cent. In the new line-up, Nissan have added a Visia Pure Drive 1.5 dCi model with a CO2 output of 129g/km which will be favoured by Motability customers. This model will not incur any road tax from April under the new First Year VED charges but this will go up to Ł90 per annum in the following years of ownership.

New Qashqai and Qashqai+2 prices start at Ł15,395 and range up to Ł26,845. The best-selling model will be the five-seat 1.5 dCi 2WD N-tec priced at Ł19,895. The new prices represent an average Ł300 more than the models they replace but that is more than accounted for by the recent increase in VAT and the fact that Nissan's ESP electronic control programme is now fitted as standard across the range.

'Urban toughness' and 'tough like no other' are the marketing themes for the updated range, and the revised styling has sharpened up the vehicle's image. Although there is nothing radically new about the Qashqai's exterior or interior appearance, it has a bold new face, new lights, new grille and new light clusters at the rear. It still has the high waistline and the elevated seating and there are new 16 and 17 inch alloy wheel designs and fresh body colours. Many of the updates have come from customer feedback and the interior now has a better quality feel about it.

The ride and drive performance has improved as well so it is comfortable and surefooted and, perhaps just as important, the storage space for small items has also been improved. The new instrument design of white letters and numbers out of a black background give a sportier look as well.

Another bonus for owners as well as those who lease a Qashqai is that the residual values are improved over those of the outgoing models. Specification is high for most models with the popular versions having power windows and door mirrors, air conditioning, on-board computer, lots of safety features, spilt/folding rear seats, a stereo sound system and loads more.

Overall the Qashqai range has been a very good ownership proposition: not my words — UK sales prove it. And the new models are even better. However, if you want to be part of the Nissan 'crossover' partnership but the Qashqai is too large for your needs, wait until the Autumn when they introduce their new British-built Juke, a B-segment (supermini) 'crossover' sports model range with expected prices from Ł13,000 to Ł19,500.

Reasons to buy a Qashqai include styling, image, versatility and comfort. It also drives well, makes a good financial ownership proposition and is a proven sales success. Against? Not a thing now that ESP is fitted as standard. — David Miles