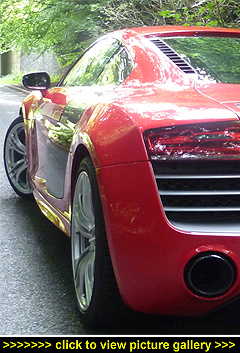 “Did you hear about the snail who
won the lottery? He’d always wanted
a head-turning fast car so visits a
coachbuilder to build him one. After
specifying an extensive list of kit
he adds one final request — that a
large ‘S’ be emblazoned down
each side. When asked why, the
snail says: When I drive by I want
everybody to look at me and say
‘Wow! Look at that S car go!’...”

SHOULD HAVE GONE TO SPECSAVERS… I mean, Audi, because buying an R8 Plus would have been much easier and infinitely more satisfying. Okay, you don't get the large 'S' but you do get contrasting carbon-fibre sideblades…

The other thing you don't get are 'Plus' badges to let everyone know what you're driving. Not that you need any — the hunkered-down, understated brutality of the Plus's looks and the joyfully intimidating V10 howl firing through the black bazooka-sized tailpipes at each rear corner will get you all the attention your ego can handle.

And if you feel the urge for a spot of totally unnecessary verbal one-upmanship then you need only mention two numbers: 3.5 (the 0-62mph acceleration time in seconds) and 197 (the top speed in miles per hour).

As you might expect, this is a machine that you need deep pockets to buy — Ł128,000. Its 299g/km CO2 emissions incurs a first year road tax bill of Ł1,090 although this drops to Ł500 from the second year onwards; officially, in the combined cycle, the Plus drinks a gallon of petrol every 21.9 miles.

While there's no such thing as a free adrenaline high (with cars they usually have to be paid for at the pumps) we actually did better: a week of brilliantly entertaining driving registered 23.2mpg.

Not that any of the above would deter you from buying one if you had the requisite six-figure readies. Besides, the important thing here is that a full tank of petrol would get you from London to Edinburgh without a fuel stop, and with a safe margin before the low fuel light blinks.

What is particularly endearing is the cabin, which manages to combine a clean, timeless design with luxury and a delightful trackday minimalism to create an ambience without even so much as a whiff of fashionableness which, as we all know, is always 'here today but gone tomorrow'. If you buy an R8 now, its cabin will still feel as fresh and focused ten years' down the road.

Supercars cannot, by definition, have more than two seats. And that's exactly what you get with the two-door mid-engined R8 Coupe. And the two front seats certainly set the tone — bucket style with built-in headrests, they have power adjustable seat base and backrest bolsters for that tailored and super-snug fit. Lumbar support is also power adjustable. Headroom is more than adequate — a pleasant surprise given that the R8 sits very close to the ground.

This is a flagship Audi, so build quality and trim materials are to the highest standard. The dash and instrument panel strike the perfect balance between style and function. Seen through the rim of the steering wheel is a crystal clear six-pack of dials with a driver's information display flanked by a large rev-counter and traditional 220mph speedometer.

The driver's display keeps you informed of everything you need to know such as the selected gear, digital speed, tyre pressure loss, upcoming route guidance prompts — and even your lap times!

Satin chrome detailing sits comfortably alongside carbon-fibre and knurled finishes to the selector lever and A/C knobs — discreet, but all the more dramatic for it.

While owners might think about ticking the options box for a Bang & Olufsen sound system (Ł950), they will definitely want to spend the extra Ł1,070 Audi charges for its advanced parking system with reversing camera (this doesn't park the car for you, only displays accurate guide lines for parallel and perpendicular parking — but it's still useful). Visibility to the front and sides is excellent; over your shoulder no so good but even if you don't add the camera you still have audible rear sensors.

With the 5.2 V10 tucked away behind you the only space for some luggage is in the R8's nose — pop the 'lid' and you'll find room for 100 litres. If you're under six feet tall you'll also have room for some anorexic weekender bags behind the front seatbacks.

Fingers wrapped comfortably around the meaty leather rim of the fabulous flat-bottomed, leather-covered sports wheel (with perforated 'work' sections and lovely thumb cut-outs), the twin-clutch S tronic paddle-shifters are perfectly sited for impeccable manual-activated shifts. Twist the key in the ignition then wait a few seconds for the fast-idling minor concerto from the 40 valves and ten cylinders warming up behind your back to settle.

The Plus also has a minus — but it's a good one: a 50kg weight loss over its not-quite-so-potent sister. If you want a Spyder Plus you're out of luck. However, you do get to choose between a six-speed manual 'box or the latest seven-speed S tronic auto.

But regardless of whether you opt for two or three pedals, the dry-sumped 5.2-litre engine is a fabulously tractable powerplant — a V10 gem that's been cut and polished by the best engineers at Audi; engineers who know just how to inject motorsport performance into road-going cars.

And that shows in the dynamics as well as the mechanicals… Slot the gearlever into drive and the V10 gets you away seamlessly, the S tronic slurring creamily up through the ratios. At low speeds, particularly on blighted British blacktop, the ride feels busier than, say, that of the V10 Spyder.

Seriously raise the game though and, as the speed rises, so does the Plus's handling grace: damping is beautifully judged and body control taut, and whatever the state of the surface beneath the 235/35 (front) and 295/30 (rear) rubber, the Plus accommodates it in an unflustered, can-do manner, all the while sticking unerringly to your chosen line. The feeling of being 'planted' is truly palpable.

The steering, too, is beautifully weighted. A hydraulically-assisted rack-and-pinion set-up, it's as fast on its toes (and turn-in) as it needs to be to match the chassis's unerring agility. Push harder and you'll also be keenly aware of the tenacity of the quattro four-wheel drive — the harder you charge through bends and switchbacks, the more tenacious and perceived is its grip.

Despite having well over 500bhp, it's an easy and reassuring machine to pilot. With quattro permanent four-wheel drive, a sports suspension, electronic stability and traction control, and a mechanical diff lock all working in your favour, you can press on over all manner of roads in all manner of weather conditions — and always with the Audi 'four rings of confidence'.

While all the dynamic choreography is going on there's another class act being played out, starring the new S tronic transmission.

Depending on whether you're out for a howling trackday or pootling down to your local Waitrose on a Sunday morning, the seven speeds can be shifted manually, using the wheel-mounted paddles (if you're a traditionalist you can use the selector lever instead), or fully automatically.

Whichever mode you use, changes both up and down are fluently rapid-fire; mid-range, the V10-S tronic combo punches with truly formidable ferocity.

Most fun is manually in the Sport setting, where changes are of the blink-of-an-eye variety and held until the driver taps for the next ratio to make use of max power. Driven like this the Plus serves up slingshot performance accompanied by a howling soundtrack as the V10 streaks eagerly to its 8,000rpm redline

Braking has its own sweet rewards as each engine-braking downshift elicits its own blipping audio effects, the kind that encourage you to change down not because you really need to but just for the sheer audible fun of it.

Really fast cars that genuinely 'do' everyday usability are a rarity. The R8 V10 Plus is one such machine and more driver-friendly than any mid-engined supercar has any right to be. Not only that, but it goes like a missile and sounds spine-tinglingly awesome! — MotorBar