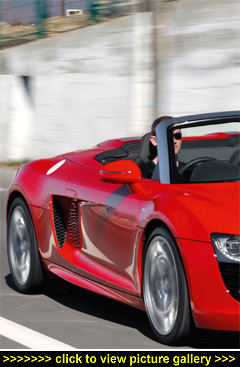 “You can have it as a fixed-head
Coupe or as a convertible Spyder;
you can have it with a 424bhp V8
or with a 518bhp V10; and you
can have Audi’s R8 supercar with
a manual ’box or Audi’s R-tronic
automatic transmission. So long,
that is, as you’ve got the Readies...”

DESPITE THE RECESSION, 5-6 month waiting lists and eye-watering prices (from Ł87,035 to Ł123,020) there's no shortage of UK buyers for Audi's svelte supercar.

Since its 2007 UK launch, 2,062 R8 Coupes have found homes in the UK; and since its introduction in 2009, 456 Spyders have also been snapped up. Eight out of ten Coupe, and nine out of ten Spyder customers, have gone for V10 power.

I recently shoe-horned myself behind the wheel of a 424bhp R8 Spyder. Its 317lb ft of torque is delivered via the standard quattro all-wheel drive system and a six-speed manual 'box. The list price for this model is Ł94,950 but add in a DVD-based SatNav, the obligatory Bang & Olufsen hi-fi, an invaluable parking system and the Ł1,000 first-year road tax plus a few more options and the price rises to Ł101,660.

My glorious test drive pushed the official 19.6mpg up to 21.2mpg — not that I was holding back or cruising in look-at-me mode, although I did keep more or less within the legal limits. A car of this nature attracts attention from the 'boys in blue', and I had no intention of smiling for the speed camera.

While the majority of UK R8 owners take the biggest-is-best route when it comes to engine size, most of us motoring pundits who have tried both feel the V8 is better suited for everyday driving — it's more refined and less 'peaky' in its power delivery.

My test Spyder was running the latest version of the high-revving, dry sump 4.2 FSI V8. Thanks to a new recuperation system that conserves energy during coasting and braking, this normally-aspirated petrol powerplant complies with EU5 emissions limits. Its 424bhp peaks at 7,900rpm; maximum torque of 317lb ft is on tap between 4,500 and 6,000rpm. Better still, at least 90% of this torque can be tapped into lower down the rev range, from 3,500rpm, as well as above the peak 6,000rpm all the way to 7,500rpm.

With a 50:50 weight distribution, the quattro all-wheel drive delivers sanitised and safe power delivery under hard acceleration and during cornering, especially on wet or muddy road surfaces.

Handling is flat and level and, despite the lightweight aluminium composite construction, mid-engine design and little suspension travel, the ride quality is not too harsh — firm yes; but generally it's compliant.

Whether the aim is to make full use of its 186mph performance on the circuit or German Autobahns or, more likely, drive sedately with the top down enjoying the fresh air and the scenery of the British countryside, the V8-powered R8 Spyder is a useable and durable supercar that can be run day in and day out without the need for numerous servicing visits.

At the heart of the R8 Spyder is an electro-hydraulically controlled hood whose design blends harmoniously with the R8's mid-engined bodystyle. Retractable at speeds of up to 31mph, this exposes the driver and passenger to the elements in 19 seconds.

When lowered, the hood folds like a 'Z' beneath the automatically activated casing of its storage compartment above the engine. The heated glass window, which is separate from the fabric hood, drops down into the bulkhead. It can be independently raised or lowered by the touch of a button with the roof either up or down. An additional wind deflector is supplied as standard and can be latched into the bulkhead behind the seats in seconds.

Although the engine compartment is positioned immediately behind the two seats, the cabin to the front appears deceptively spacious. The R8 Spyder is equipped with the same kit as the Coupe R8, but in addition has heating and power adjustment for the Fine Nappa leather-trimmed seats although unfortunately no scarf or neck warming function as found on some other less-expensive convertibles. Also, there are not enough bespoke secondary controls: many of the stalks and switches can be found in much cheaper Audi and Volkswagen models.

However, included is Bluetooth mobile 'phone preparation incorporating seatbelt-mounted microphones which make it possible to talk on the phone even with the top down on the motorway, a top-of-the-range sound system, sports seats, remote central locking, power-operated and heated door mirrors, electric windows, a flat-bottomed multifunction steering wheel, aluminium gear knob and sporty design gearlever gate, on-board computer, lockable glovebox, scuff plates, front and side airbags, a retractable rear spoiler and 19-inch alloy wheels (8.5J at the front and wider 11Js at the rear).

Technical items, over and above the V8 engine and quattro drive, include eight-piston front brake callipers (four-piston at the rear), electronic differential lock, traction control and integrated electronic handling with variable settings that can be chosen by the driver.

For the record, early in 2012 comes a lightweight R8 GT in both V10 Spyder and Coupe limited edition versions. Only 66 are available in the UK but, and here's the bad news, all are already sold despite no price indication. These hardcore 197mph R8s demolish the benchmark zero to 62mph time in just 3.3 seconds.

But back to the V8 Spyder. What's not to like? Running costs — but for those who can afford one, this will most definitely not be an issue. Top-up, rear visibility is restricted and some switchgear comes from much cheaper Audi/VW family models.

Ł100,000 buys you a spectacular-looking car with brilliant performance, and one that has far greater road presence than any of the more conventional front-engined convertibles from Aston Martin, Bentley, BMW, Jaguar and Mercedes-Benz. Compared to them, the R8's price looks good value indeed. — David Miles