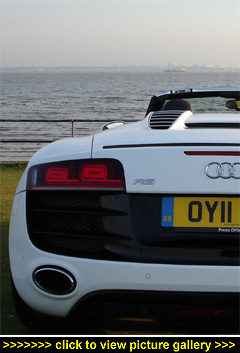 “For around Ł190,000 you could
buy yourself an Aston Martin DBS
Volante. But if it’s a combination
of both wow-factor and yee-haa!
driving thrills you’re after, there’s
another convertible that trumps
James Bond’s favourite — Audi’s
R8 V10 Spyder. Not only that, but
you’ll get change...”

SERIOUSLY THOUGH, if you really are in a position to lavish six-figure sums on a car, then the Ł70,000 that stays in your hip pocket if you buy the R8 will, despite being a useful wad of 'walking around' money, be irrelevant.

What will be exceedingly relevant will be some other, far more meaningful figures: 10, 517, 4.1 and 194. Ten is, of course, the number of cylinders configured in a 'V' just behind your back; 517 is the brake horsepower waiting to be unleashed; 4.1 is the time you'll spend getting to 62mph when 517bhp is dropped on the blacktop; and 194 is how fast the R8 will fire you through the air towards the horizon, measured in miles per hour.

All stirring stuff. But the icing on the R8 cake is the 'Spyder' part of the deal. There's absolutely no doubt that the drop-top R8 is a stunning-looking machine. Stories of wealthy owners in Japan keeping them in their living rooms are far from made-up. Get up close to one — especially one like our test R8 Spyder, finished in glistening white of the purest hue — and you'll understand perfectly.

Unlike some supercars, the R8 Spyder doesn't generate envy; the extreme opposite, in fact. No doubt because just gazing at it is so satisfying. Hearing it is another, more visceral source of pleasure — funnel the power and glory of ten cylinders down two big exhaust pipes and the resulting howl is a mechanical siren song that enchants every single time it's heard.

Such is the allure of its voice that the R8's back screen drops down into the rear bulkhead at the touch of a button so that, for those rare times when you'll need to drive with the roof up, you can still get your aural fix.

A genuine supercar A-lister, the V10 Spyder runs to a true 194mph — on the way, 62mph comes and goes in a 4.1-second flash. The 5,204cc direct-injection V10 kicks out 517bhp alongside 391lb ft and despite the torque maxing at 6,500rpm, it pulls hard — gutturally so — from below 2,000rpm. And continues to do so until you redline it at 8,500rpm. Tractability is most definitely not in question here — not that one would ask it to, but this 40-valve V10 will pull cleanly in fifth from below 20mph.

Best of all, this ten-cylinder powerplant lives to rev: and with 391lb ft of torque, it feels permanently locked 'n' cocked whatever figure the rev-counter needle is hovering over. Find a clear stretch of road, palm the machined aluminium gear knob and drop down into third, hearing the addictive clack-clack as the lever snicks unerringly through the open aluminium gate... then crush the throttle under you right foot.

The R8 catapults forward, your stomach struggling to catch up. Acceleration is ferocious; yet it's all superbly-controlled as the Pirellis hunker down and the quattro all-wheel drive delivers peerless traction.

Optimising the V10 Spyder's power-to-weight ratio is a body built from lightweight materials: an aluminium spaceframe chassis clothed in a mix of aluminium and composite materials (such as the carbon-fibre door skins and engine cover). Audi planned a Spyder version from the outset and it shows because there are none of the usual converted-to-a-cabrio giveaways such as scuttle shake or a downgrading of the handling.

Complementing the Spyder's weight-optimised, mid-engined, four-wheel drive configuration are magnetic dampers that offer two settings at the touch of a button: Normal and Sport.

Left in the default Normal mode, the ride is amazingly compliant over a wide range of road surfaces in spite of the big wheels and tyres — 19-inch alloys shod with 235/35 (front) and 295/30 (rear) Pirelli P Zeros.

And there's no penalty running in the comfort-oriented Normal mode — it in no way makes the R8 any less able to deliver brilliantly responsive handling. Sport just adds those incisive extra degrees of commitment (especially cornering) for 'high days' and trackdays.

Notwithstanding the quattro system directing drive to all four wheels, Audi has engineered-in a strong rear bias (front 43:57 rear), ensuring R8 drivers get the best of both worlds: the purer dynamics of rear-wheel drive enhanced by supremely superior surefootedness. The result is that skilful drivers will be indulged rather than flattered; and the not-so-skilled will receive an injection of hard-charging reassurance.

The key to wielding the chassis' blade-sharp agility is the R8's steering: its fluent precision and response is reinforced by a weighting that keeps you aware of not just where the Spyder's going but, crucially, how it's getting there.

Tellingly, a series of sharp, twisty bends can be speared at high speed without the least surge in your heart-rate. And when you need to scrub off or modulate speed, the brakes — serious-looking, black-painted callipers clamped around massive drilled and vented discs — simply wipe it off.

Almost as much of an eye-catcher as the body is the Spyder's automatically-folding fabric roof — it's a real piece of theatre as it folds or unfolds with the panache of origami magically brought to life, either to settle elegantly on the rear deck or completely disappear beneath its dedicated carbon-fibre cover.

Exactly as you would expect, you need do nothing more than press a button. The roof can even be raised or lowered on the fly in 18 seconds provided, that is, you have the willpower to hold the speed to less than 31mph. A dedicated mesh wind-blocker is stored in the front luggage bay and, when required, clips into place ahead of the smaller glass rear screen — both you and your passenger will be glad of it on a long, fast top-down trip.

Roof up, you could be in a R8 coupe; given it has to seal perfectly at nearly 200mph, at half of that the well-insulated fabric roof guarantees a cosy, refined cabin. And the driving experience is no less enjoyable for having the top raised. What you do miss top-up is the uninterrupted rearward visibility: with the roof in place, rear visibility straight back is okay when you're driving although tricky when reversing — in which case you'll find a new friend in the Spyder's rear parking camera.

Actually, you don't have to master 'reversing by screen' — after a full week in the Spyder and the occasional over-the-shoulder double-take through the open driver's window, we didn't have any problems parking up. If need be, you can switch the parking display between schematic and camera; and within camera mode you can also switch between guide lines for parallel or right-angle parking.

However wealthy you are, you still need to put petrol in your tank. And while the cost won't be an issue, the range will. With a 17.6-gallon tank, expect to fill up every 270 or so miles; on longer runs you might extend this to almost 350. Officially, the V10 averages 19mpg (urban 12.7mpg; extra urban 26.4mpg). Driven with some brio — and why wouldn't you? — it registered 17.1mpg; kept on the leash, it returned 22.6mpg on motorways.

Interestingly, the last Ferrari 430 Spider F1 we tested averaged 14.5mpg for virtually identical performance: 0-62mph in 4 seconds and 196mph. So 17.1mpg isn't so bad after all!

Sybarites might wish for a dash more decadence in the logically laid-out cockpit but to a degree you'd be missing the point of the R8. Designed to be functional, its raison d'être is 100% about doing; 0% about posing.

Essentially, the fascia and cockpit layout is the same as you'll find in coupe versions. Two buttons on the central transmission tunnel are new: one to power the roof up or down; the other to raise or lower the neat glass rear screen.

Driver information is crystal clear. Of particular relevance is the selectable digital speed display in the secondary screen between the dials. If you want to hang on to your driving licence then, like us, you'll keep it permanently on show. The SatNav is typical Audi: foolproof, and simple to use. And the flat-bottomed, leather-wrapped wheel houses remote controls for voice, audio, navigation and 'phone.

The two principal dials sit in tear-shaped nacelles: on the left, revs; on the right, speed. Four secondary gauges display coolant temperature, fuel, volts and, importantly in a machine than can handle track use, oil temperature. The handbrake is traditional, works fine, and feels strong enough to hold a battleship.

Oh, and pack light: apart from a slim glovebox, some handy lockers in the rear bulkhead, good-sized door pockets and a multi-cupholder alongside the handbrake, the only other storage is in the 100-litre boot under the 'bonnet' — the perfect (and only) place for a couple of squashy weekenders.

To say that only a few cars can touch the R8 V10 Spyder at any price is to seriously undersell it. Stunning to look at with 24-carat presence and not an ounce of flash, it's a sensational drive every day of the year with traction guaranteed whatever the weather. Whoever says that money can't buy you happiness clearly hasn't driven a V10-engined R8 Spyder. — MotorBar