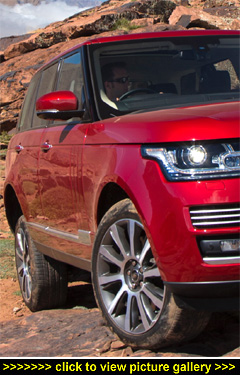 “Designed and built in Britain, the all-
new fourth-generation Range Rover
has arrived. Ł71,295 is the price of
the ‘entry level’ model with the range-
topper coming in at just under the
Ł100,000 ceiling. Traditionally UK
buyers order extra-cost options so
in theory the top price for their top
model could be close to Ł110,000...”

DEPENDING ON WHICH ENGINE is chosen, trim levels are Vogue, Vogue SE, Autobiography, and Supercharged. All engines offer high power and torque outputs and deliver swift and effortless performance. Customers can choose from a 503bhp petrol 5.0-litre V8 Supercharged, a brand new 3.0-litre V6 turbodiesel with 254bhp, and a 334bhp 4.4-litre V8 turbodiesel; all paired with a smooth and responsive eight-speed automatic transmission.

Or you could hold fire until the new diesel hybrid version with CO2 emissions of 169g/km is introduced later this year along with the new Range Rover Sport. Land Rover expects the new 3.0-litre V6 turbodiesel, with its CO2 emissions of 196g/km and Combined Cycle fuel consumption of 37.7mpg, to be the main-selling unit, followed closely by the 4.4-litre V8 turbodiesel (229g/km with an official 32.5mpg).

The 5.0-litre supercharged V8 petrol engine will appeal to an expected 10% of UK customers not put off by the 322g/km of CO2 emissions or 20.5mpg. It's likely that the best-selling new Range Rover in the UK will be the 3.0-litre diesel in Autobiography spec that costs Ł87,895, as reviewed here.

Whereas previous Range Rovers could be said to have been the finest SUVs/4x4s of their day, today we could say the latest generation is not only the finest luxury SUV but the most all-round capable car in the world — one that combines the luxury, comfort, status, image, quality and technical refinement of a luxury car with the best 4x4 on- and off-road capabilities. It can also equally compete against the likes of Rolls-Royce and Bentley models for luxury.

The new model still weighs nearly 2.2-tonnes in its lightest form but the bodyshell, not the complete vehicle, now weighs less than a BMW 3-Series bodyshell. The new aluminium front and rear suspension deliversa class-leading 597mm of travel for off-road work and the wading depth has increased by 200mm to 900mm.

The signature twin upper and lower rear tailgate design is retained and the roofline now lowers towards the rear, and the glass area remain large, giving the usual first class visibility from the command seating positions. The four-door Range Rover has five seats as standard but it can also be ordered with a four-seat configuration.

Rear seat passengers now have over 118mm more legroom, due in part to a 40mm longer wheelbase. The rear seats are also electrically-adjustable and can even be folded by the push of a button. Do so and the 550-litre boot transforms into a 2,030-litre load bay.

The new Range Rover's interior is pure luxury, and includes wood veneer which looks as though it's part of the structure of the car rather than merely a stick-on trim finish. Leather seating, fascia, and door panels are not just coverings but proper upholstery.

Some of the many extra-cost options include the largest sliding panoramic sunroof for any SUV for a mere Ł1,500 — however, I would object to paying Ł200 for the full-size spare wheel, a 'must' for any heavyweight SUV.

In addition to the usual full-time intelligent 4WD system with a two-speed transfer box, Land Rover's Terrain Response system is now in its second generation — it analyses the current driving conditions and automatically selects the most suitable vehicle setting.

Despite it being a technically advanced vehicle, driving is exceptionally easy with most drivetrain functions automatically selected. The air suspension also has the usual ride height adjustment, and there's less body roll on this new version during cornering, giving a more composed ride in keeping with its luxury car status.

Very noticeable is the hushed interior. There's virtually no road noise intrusion, even from the largest 22-inch wheels; little vibration from the wheels or drivetrain; no wind noise intrusion and the engine noise is minimal inside the passenger compartment thanks to the double bulkhead.

If ever there was a vehicle suited to arctic conditions it is the Range Rover, which shrugged off the snow covered roads with its customary 4x4 ease. Off-road driving in the forests around Eastnor Castle is challenging in the dry, let alone 10-inch deep snow, 18-inch deep muddy ruts, over two feet deep icy muddy water hazards — and once it became dark, freezing ice covered near vertical climbs and descents.

Over several decades I've driven new Land Rover models in rain, mud and sun at this facility but I've never driven the hazards in the dark and in very deep snow. It was magical, frosted snow glistening from the headlights — and all done without mishap and without feeling daunting because the vehicle is so capable; the latest Terrain Response is was easy to use with virtually no input from me.

For on-road driving the new 3.0-litre V6, 254bhp turbodiesel unit will fit the bill for most buyers. The high torque (an impressive 442lb ft at 2,000rpm) makes it responsive to the right foot and it's flexible and quiet to drive.

However, its real-life fuel economy on our country roads driving route was just 24mpg — too far away from the official 37.7mpg figure even though the weather was cold. Perhaps this 3.0-litre engine has to work too hard at times, and in so doing uses more fuel...

The better option during our test drive proved to be the 4.4-litre V8 334bhp turbodiesel with a massive 516lb ft of torque from 1,750rpm.

It was immediately noticeable that this is the perkier engine and probably the one to go for if your budget can stand it. Interestingly, its on-road fuel consumption was better — at 27.3mpg (officially 32.5mpg) — than the 3.0-litre model driven over similar roads because this more powerful unit doesn't have to work so hard.

We also used this model during our serious off-road driving in deep snow, deep water, steep up and down tracks in terrain and conditions that would break many other 4x4s.

Whilst this V8 version is the supreme off-roader because of its power and torque and the sophisticated all-wheel drive system, that wasn't to say that our 4.4-litre Autobiography didn't have a few reliability issues during our time with it.

During two occasions while driving on-road my test car felt as though the engine had suffered a minor power loss; almost like a miss-fire. Driving off-road, the inside of the vehicle smelt of diesel fumes and finally the exhaust particulate filter warning light came on indicating the filter bowl was nearly full.

I'm told this was caused by the three hours of slow up and down hill off-roading, but it didn't happen to other new Range Rovers also on the course at that time in the same conditions. Perhaps all three faults were connected but I sincerely hope Land Rover's past problems with reliability do not reappear to tarnish the reputation of its latest and finest model range yet.

Against? Costly to buy and run, not that fuel frugal, a couple of technical issues with our 4.4 V8 test drive model.

Boasting a sumptuous interior, this new fourth-generation Range Rover is probably the most capable car in the world: fleet-of-foot and agile on-road; a giant off-road. — David Miles