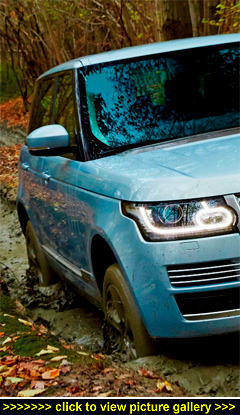 “Land Rover has developed and
introduced the World’s first premium
diesel SUV hybrids in the form of the
Range Rover and the Range Rover
Sport Hybrid models — they provide
the economy of a V6 diesel with the
performance of a V8 but with no
compromises for interior space and
driving performance on- or off-road.
Ordering starts now for UK deliveries
in early 2014...”

Do your sums and you'll find the 3.0 V6 Hybrids carry a price premium of Ł10,505 (Range Rover) and Ł6,555 (Range Rover Sport) over the equivalent spec non-hybrid models. To showcase the Range Rover Hybrid, the company recently undertook a 10,000 mile test-drive with four vehicles from the home of Range Rover in Solihull to the home of the parent company, Tata, in Mumbai, India. Taking in 12 countries, the all-important average fuel economy was 47mpg.

This week a very small group (just three) of the UK's motoring press put the new Range Rover Hybrid models through their paces, both on-road and in the rough at the challenging off-road driving course at Eastnor Castle, Herefordshire — the traditional home for rugged off-road testing of Land Rover and Range Rover models throughout their 65 year history.

The hybrid system — including the lithium ion battery pack, inverter and electric motor — weighs less than 120kg. The latest aluminium construction Range Rovers introduced this year weighed in at up to 420kg lighter than the previous generation versions, so even with the addition of the hybrid technology they're still considerably lighter.

The electric motor produces 125lb ft of torque to boost acceleration and can propel the vehicle in EV mode although only for a short distance. Housed in the gearbox casing, the motor also acts as a generator — harvesting kinetic energy through regenerative braking and charging the battery when the vehicle is slowing. In driver-selectable EV mode, the Range Rover Hybrid can travel at speeds of up to 30mph for a distance of up to one mile before the diesel engine seamlessly restarts.

Taken together, the diesel engine and electric motor generate 335bhp at 4,000rpm and 516lb ft of torque between 1,500 and 3,000rpm — the result is performance close to that of the mighty SDV8 turbodiesel. Both the Range Rover and the Range Rover Sport accelerate to 62mph in under seven seconds, delivering strong transient and mid-range performance, and can reach 135mph (Range Rover) and 140mph for the Sport version.

With a 26% reduction in CO2 emissions over the standard 3.0-litre V6 turbodiesel, the hybrid produces 169g/km and officially returns 44.1mpg on the Combined Cycle (35.9mpg on test). Road tax is down to Ł285 in the first year and then it's Ł200 for year two onwards (non-hybrid 3.0 V6 turbodiesels emit 196g/km and is taxed at the rate of Ł475 first year and then Ł260 per annum). Company drivers using a Range Rover Hybrid will benefit the most with Benefit-in-Kind tax down from 34% to 28%.

The latest generation Range Rover models just recently introduced were designed to take hybrid power. Consequently the liquid-cooled battery pack is mounted beneath the floor in a protective boron-steel cradle and does not impact on the cabin or luggage space.

Range Rover Hybrids have the same five-seat capacity and luggage space as the standard vehicle, and retain the full-size spare wheel. This no-compromise philosophy is echoed in the Range Rover Sport Hybrid whose interior is unchanged from the standard model, right down to the 5+2 seating arrangement.

Both hybrid Range Rover models continue to deliver impressive capabilities and versatility, the only compromise being the considerable added purchase cost — but then the tax savings and improved fuel economy do offer some compensation.

Initially the most noticeable change is the lack of any engine noise as the Range Rover Hybrid pulls away using just the power from the electric motor with the only sound being the crunch of gravel under the 21-inch alloys. But then, within a few seconds, the V6 engine cuts in seamlessly and quietly — fortunately the dash dials keep the driver informed as to what power source is in operation and, more importantly, how much battery regeneration is taking place.

With the engine and electric motor working in harness, the immediate availability of torque is most noticeable for strong acceleration combined with linear power delivery. The eight-speed ZF autobox has the usual Drive and Sport modes with the Hybrid control system prioritising efficiency, performance or engine braking regenerative charging modes depending upon driving conditions.

On the road the Range Rover's Hybrid system acts like most other hybrids I've driven — they work best gathering braking energy when not driving on motorways and dual carriageways. They harvest battery power more efficiently on the 'overrun', gliding up to traffic lights or roundabouts and so on, or in rural locations on the overrun going down hills or around corners.

Actually, other than stronger immediate acceleration, hybrid power doesn't add much during fast cruising conditions. In fact, it's surprising how little retardation there was in the vehicle's speed on the overrun when the combined electric motor/generator unit cuts in to harvest power.

On some hybrids there is quite a strong braking feel during this slowing down phase which can be useful saving braking pressure. On the Range Rover Hybrid it felt like any other new non-hybrid Range Rover. Pulling up to country crossroads the diesel engine stopped very promptly (in some cases before the vehicle came to a full halt), which was a bit off-putting especially if it was clear to pull away because no sooner had the diesel engine cut out than it had to fire up again as we accelerated across the junction.

Neither the lack of harvesting mode speed retardation or the abrupt cutting out of the diesel engine are issues; they just take time to get used to and are perhaps those functions that are not yet quite as refined as the hybrid petrol/electric system used by Lexus in their SUVs.

Off-road there really is no difference in the abilities of the Hybrid Range Rover to what you get from their conventionally-powered stablemate 4x4s. Neither should there be, as the powertrain retains Land Rover's renowned permanent four-wheel drive system (including the latest Terrain Response 2) with the same uncompromised ground clearance and 900mm wading depth of non-hybrid versions.

With the height-adjustable suspension raised, the Terrain Response dialled into the appropriate setting and descent control switched on, it was supreme off-roading performance as usual.

Even having the batteries cradled in steel beneath the floor doesn't limit ground clearance as the vehicle was designed from the outset to accommodate the hybrid power source.

It was good to know, too, during my off-road testing, that the steel protection is strong enough to support the 2.4 tonne Range Rover should it 'bottom-out' on muddy tracks; for the record it's also impervious to attack from jagged rocks and is sealed to keep out the deep water, sludge and mud — all the 'best' things Eastnor Castle's off-road facilities liberally throw at vehicles driven there.

These must-have, efficient hybrid technology models have been brought to the market without compromising Land Rover's legendary reputation for off-road ability coupled with on-road limousine refinement. The only 'losses' involved are to the government's coffers (thanks to the lower CO2 emissions and improved mpg). And while these hybrid Range Rovers are expensive to buy, there are more than enough wealthy customers for whom price will never be an issue. — David Miles