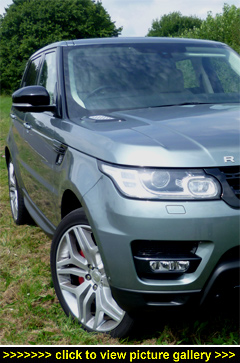 “These days Ł750,000 will still —
outside London — secure you a
very nice house indeed. And just
ten per cent of that will buy you
a very fine car to park on its drive.
By coincidence, Ł75K just happens
to be the price of a new Range
Rover Sport SDV6...”

THE LATEST RANGE ROVER SPORT has only one true rival — itself. Because it's seen as the best all-round, real-world luxury car on the market, even by those who've never driven one! But, like the A-list celebs who favour them, is it as good as its fans believe?

A fine place to start is to consider the latest Range Rover Sport's most recent and remarkable achievement — lapping the Nordschleife circuit at the Nürburgring in Germany in 8 minutes 14 seconds. A feat that makes it the fastest production SUV around the infamous 'Ring'. Impressively, the daring deed was carried out by a Land Rover driver testing a standard production example of the potent new Range Rover Sport flagship — the SVR.

The SVR, which made its debut at the Goodwood Festival of Speed earlier this year in June, is powered by an uprated version of Land Rover's 5.0-litre supercharged V8 petrol engine tuned to deliver 542bhp — a useful 32bhp over the Supercharged's 510bhp.

With 70-plus corners strewn about the undulating 13-mile track, the ultra-demanding Nordschleife circuit is undoubtedly the ultimate test for any high-performance vehicle. In this challenging environment, Land Rover wanted to see whether a sports utility vehicle could behave like a performance car — the results were spectacular, with the Range Rover Sport SVR demonstrating outstanding on-road performance capabilities.

Development of the Range Rover Sport SVR (in showrooms in 2015) has been carried out by Jaguar Land Rover's Special Vehicle Operations team; their aim being to produce the most performance-focused Range Rover Sport ever.

This they have done — and all without compromising its luxurious levels of comfort or class-leading all-terrain capabilities. In fact, the Range Rover Sport SVR features a twin-speed transfer case to provide a choice of low and high gear ratios and the same off-road abilities as other models in the Range Rover Sport line-up, notably an 850mm wading depth (that's almost three feet — deep enough to totally submerge Bilbo Baggins) and a 278mm off-road ride height (the standard on-road ride height is 200mm).

In keeping with spending a Ł75K budget we've been driving a 3.0-litre SDV6 — not quite as brutal as the SVR but easily packing all the punch most drivers will ever really need: 288bhp backed up by 442lb ft of torque from a refined V6 turbodiesel that's able to take you to the benchmark 62mph in a crisp 7.1 seconds and on to a top speed of 130mph.

And it will do it as economically as it does it effortlessly — officially it swigs diesel at a rate of 37.7mpg (32.5 in town and 41.5 touring). Our week with the SDV6 saw a recorded test average of 36.7mpg. Given its two-tonne weight, two pedal set-up and permanent four-wheel drive, that's cause for popping a brace of Laurent-Perrier corks. And we did!

As standard, the five-door Sport comes with seats for five although its longer wheelbase offers the option of an additional third-row of occasional rear seats. Stick to five and you'll be well served with plenty of room packed into its 4.8-metre length.

The Sport's enormous 784-litre boot should cope with even seven people's luggage. Fold the rear seats and you'll have a 1,761-litre cargo hold with ample length to slide in a mountain bike that's still wearing its wheels. And that's with — under the boot floor — a spare full-size 22-inch alloy wheel.

You also get 22-inch alloys, sliding panoramic roof with powered sunblind, 18-way powered front seats (both with memory function), three-zone climate, paddle-shifters for the eight-speed ZF automatic transmission, heated steering wheel (a real boon), rearview camera (there are also a number of strategically-sited external cameras that between them cover every important angle, whether you're reversing, nosing out into a tricky blind junction or judging a tricky manoeuvre off-road), parking sensors, High Beam Assist (lets you see more for longer at night without dazzling other drivers), Meridian surround sound hi-fi, adaptive cruise control, etc.

Standard, too, is a twin-speed transfer box and the added functionality of Terrain Response 2 with low range; if you prefer, it can automatically select the most appropriate mode for driving over grass, gravel snow, mud, sand, rocks, etc. As formidable off-road as this makes the Sport, as confirmed by its Nürburgring showing, it is first and foremost a sophisticated and super-confident on-road machine.

Braking is particularly well-fettled, with great feel though the progressive pedal and stopping hard, seriously hard, is never an issue — note those red Brembo front callipers. If your destination is off-road, you can easily drive wearing seven-league boots as there's loads of room in the footwell.

For well-heeled sybarites a hill of optional equipment is just a check box away — the Ł10K sample of desirable extras fitted to our press car included must-have cooled and heated front and rear seats (a snip at Ł500), dual-view touchscreen so your front passenger can watch TV or a DVD while you're taking care of the chauffeuring (Ł600), killer Meridian surround sound hi-fi, 1,700-watts and 23-speakers good (Ł5,000), Park Assist, an electronic car jockey to park your Sport for you (Ł450), and rear seat entertainment package (Ł1,500).

Dynamically, this all-new and 420kg-lighter Range Rover Sport is significantly more agile than any model that's come before. Contributing to this new-found dynamic vigour is the 25% increase in body stiffness that's a by-product of its new aluminium monocoque body. Overall, it's superbly competent and faced with challenging roads, has both the poise and the pace to cover ground very quickly indeed.

If you've watched the video of the Sport oh-so-nonchalantly taming the Nürburgring you don't need telling that the Sport carves corners with panache — there's amazingly well-disciplined body control and tenacious grip as the Sport's hardcore wizardry scythes it through the undulating apexes that made the former German grand prix circuit (nicknamed 'The Green Hell') too dangerous for the Formula One circus.

On more everyday roads the Range Rover Sport's progress is as regal as it can be racy. However, if it's a blacktop-baiting drive you're in the mood for then select the Terrain Response's 'Dynamic' setting and you'll be hardwired into the Sport's most road-taming mode — the suspension firms, the already quick, accurate and nicely-weighted steering tightens up, and the all-wheel drive becomes more rear-wheel drive biased. Try it once and you'll almost certainly do all your future road driving in Dynamic.

As hugely competent as the Sport is both on- and off-road, it's also very intensely about luxury… and the term 'in the lap of' sums it up beautifully. Four adults will travel serenely because, dynamic core aside, the Sport cocoons you better than any limo.

Externally it's unmistakably a Range Rover, albeit noticeably more discreet than the Sport of old. The new Sport's sharply-tailored lines add a rakishness to the cut of its jib; and do a neat job of disguising its near-five-metre by two-plus-metre footprint — a stately physical presence you don't fully grasp until you're about to step aboard.

The moment you're seated in the light and airy cabin, the Sport's stature is confirmed; you sit snugly in extremely comfortable elevated seats that offer superb support — down to the them not only being electrically adjustable sixteen different ways; for instance, both seat base and backrest side bolsters are individually adjustable for that bespoke fit.

It's an ab-fab place to hang out. Enthroned in the soft Ivory-coloured leather, the captain's armrests adding extra comfort, you really can't help but feel a tad high and mighty. From the driver's point of view, the royal driving position provides the excellent visibility that's essential for safe and stress-free overtaking — or just providing advance warning of potential problems ahead whether you're battling through cut-and-thrust town traffic or pootling around country lanes.

Press the Start button and you barely hear the V6 turbodiesel — a character that makes the SDV6 Sport a soothingly-imperious cruiser. The eight-speed autobox is equally discreet, slurring indulgently through its gears but always alert to pressure from your right foot; paddle-shifters and a manual mode are on-hand whenever you want to get personal and step-up the performance. Add to that the superbly comfortable ride; yes, even riding on those dramatic 22-inch split spoke alloys. Pampered doesn't even begin to describe it.

Much appreciated attention-to-real-life touches include the remote driver-operated child locks on the rear doors (you'll only know how useful this is if you've got kids; the oh-so-simple and utterly foolproof all-terrain Terrain Response system; the Wade Sensing feature that monitors depth when driving through water; and the two sun-visors each side so you can shield your eyes from the dazzle ahead as well to the side at the same time.

Choosing to ride in row-two doesn't involve making any compromises with 'first class' in row-one because the back seats are every bit as comfy; recline them and you'll be in lounging heaven. Plus, as you'd expect, 'back-seaters' get their own dedicated climate controls.

The turbodiesel under the bonnet does a fine job of muting miles; tiresome town miles or three-figure autobahn 'klicks'. Virtually soundless (apart from a mellodious background hum) unless pressing on hard, its 288bhp provides more than 'adequate' power — to borrow Rolls-Royce's famous phrase — but it's the 442lb ft of torque that tells the Sport's real performance story.

Power delivery is refined, and comes with the invigorating feeling of always being ready to lunge forward, like a hound eager to slip the leash and be given its head. Its tireless, long-legged high-speed gait makes you want to up and drive away — a quick jaunt across the Channel with friends for lunch in Paris at La Ratatouille is hard to resist.

Unlike many celebrities, the Sport does live up to its rep and shines under intense scrutiny — to drive on and off road (off-road it's arguably the best in the world) and to travel in it is every bit as special as its reputation promises.

In fact, in Dynamic mode it's compulsive enough to more than satisfy a seriously keen driver and earn itself the 'Ultimate SUV' crown. It's also elegantly luxurious and packed with an arsenal of foolproof and simple-to-use technology. So is it game, set and match Range Rover? Actually, it's better than that — it's a Grand Slam. The new Range Rover Sport wins the tournament. — MotorBar