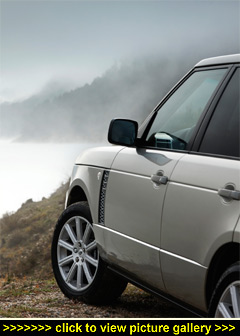 “Life, so they say, begins at forty.
It certainly does for the iconic Range
Rover, which still reigns supreme
after forty years...”

ALTHOUGH THE RANGE ROVER was first launched in its all-wheel drive, three-door form forty years ago, the current incarnation came to market in 2001 and it has constantly evolved since then into the world's top premium 4x4 and the chosen transport of the rich and famous.

'New money' younger customers and professional footballers mainly opt for the more dashing Range Rover Sport versions but 'old money' customers who appreciate 'class' retain their love affair with the taller and status-portraying Range Rover with its limousine specification interior and ride comfort. And the secret to the on-going success of the Range Rover is that its luxury appointments don't make the five-door, five-seat iconic 4x4 any less accomplished when the going gets tough off or on road.

The new 2010 Range Rover line-up now includes the top-notch Autobiography specification level in addition to the well-know Vogue and Vogue SE variants. There are three engine options: the all-new 5.0-litre V8, 375bhp/376lb ft petrol unit; the new supercharged version of that engine with 510bhp/461lb ft and the main selling 3.6-litre, twin-turbo V8 diesel unit with 271bhp of power and 472lb ft of torque. All use a six-speed automatic transmission with full-time four-wheel drive with locking differentials, different terrain mode selection and a high/low-ratio transfer box.

The Range Rover might still be a 4x4 but it is also a genuine alternative to a luxury saloon. It is just as likely to be seen in the UK carrying the rich and important around the streets of power in London as it will be on the country estates of Great Britain or any of the Arab States or in Russia, China or the US. For these and other markets there are armoured versions as well.

With its impeccable leather, wood and high quality interior finishings, electrically-adjustable front and rear seats and limousine-style instrumentation, you might think the latest Range Rover has gone 'soft'. Well it has — but only as far as the electronically-operated air suspension which now gives magic carpet ride-comfort and can be raised or lowered as required. But when the going gets tough, the vehicle has lost none of its ability to deal with the worst of off-road driving conditions.

Whether it's scrawling over rocks, clawing its way through axle deep mud, climbing up sand dunes or fording rivers, the Range Rover still has the tools to be the best in the world at doing these things. Its sophisticated all-wheel drive system makes light work of most situations and, thankfully, the selection of these various modes is intuitive and easy due to a logical central control unit with mode diagrams and simple buttons to further tailor the right driving mode. I just wish other manufacturers made their hi-tech 4x4s so logical to use.

The worst driving conditions I could throw at the Range Rover were the recent deep snow and treacherous ice followed by the severely potholed tracks that were once our roads. The traction is huge in the slippery stuff, the handling floats along but is predictable and the big wheels, wide tyres and air suspension just ironed out the bumps and potholes. The steering remains light and remote and the body does roll during fast cornering but never in a way to cause alarm. Its limousine ride is to be enjoyed, as too is its 4x4 ability and sumptuous interior.

The twin-turboed 3.6-litre V8 diesel engine pushes out 271bhp, the least of all three engines on offer, but it is the huge torque output of 472lb ft from 2,000rpm that makes this vehicle feel punchy and responsive with a surge of instant 'grunt' whenever needed. Alternatively, it will happily trundle along at more or less tickover speed in heavy traffic, off road or in deep snow. The diesel unit is remarkably quiet as well. The six-speed automatic gearbox is a joy to use with this engine and like everything else about this very large vehicle that makes driving so easy.

Top speed is 124mph and 0-62mph takes 9.2 seconds, so despite its weight and size it's no slouch. As for fuel economy it will officially average 25.4mpg in the combined cycle. During my testing time the vehicle arrived with a low 22.1mpg showing on the computer and after some motorway cruising at 70mph with a light throttle, this went up to 33.2mpg. Overall after a week's motoring in snow, ice, mud, potholes and town and country travel, the final average figure was 27.9mpg — still better than the official figure.

Not so impressive is the relatively high CO2 output of 299g/km but what can you expect from a V8 engine? Consequently the road tax is now Ł405 a year and from April (2010) the 'first year' VED rate will rise to Ł950 before returning to Ł435 for the following years. Of course, if you can afford to buy, or more likely lease, this type of vehicle then paying that sort of money in tax to be on the road is chicken-feed. Not even the 35% Benefit-in-Kind company car tax is going to make any difference to the drivers who choose to have a Range Rover — they pay quite happily for what they get and they get the best of its kind.

For sure the Range Rover, or any big 4x4, will not be affordable, desirable or will not suit a fair proportion of motorists but this British-built icon created the 4x4 passenger car market and it is still going strong after 40 years. So while it's expensive to buy and to run, it's also huge in every way: image, comfort, limousine interior, quality and off-road ability. — David Miles