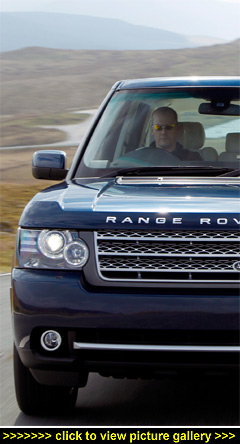 “Not only the most versatile car
but the most capable and luxurious
4x4 SUV on the planet, that’s the
2011 Range Rover Autobiography.
That statement should raise a
few eyebrows but just consider
the following facts...”

THE BRITISH-BUILT RANGE ROVER 4x4 can, literally, climb a mountain, ford rivers, travel across deserts, gatecrash jungles, mud-plug in seriously bad conditions yet with a wash and brush-up can appear at 'Beckingham' or Buckingham Palaces or any other royal household in the world and is accepted as the luxurious car of choice for royalty, the rich and the famous.

Such desirability has made the Range Rover and Range Rover Sport iconic vehicles around the world and markets such as the USA, China, Russia and India are all reporting increased sales — 78% of the model range is exported to over 140 countries.

British designed and built, but unfortunately no longer British owned and now under the control of the Indian Tata Motors conglomerate, JLR's (Jaguar Land Rover) success ensures British jobs at Gaydon, the West Midlands and Liverpool with more jobs being created.

The Land Rover/Range Rover brands still continue to be a success in the UK with a 28% increase in domestic sales last year — good news again for the 18,000 UK employees. All models right across the range exceeded their performance, with the Freelander up 37%, Range Rover up 29%, Discovery up 27%, Range Rover Sport up 23% and Defender up 11%.

And there's more good news for the future. At the Geneva Motor Show this month the company debuted a raft of new models and technologies including a diesel-hybrid prototype. New production versions on show at Geneva are the Ł130,000 Range Rover Ultimate Edition (based on the new Autobiography version) and the new 'baby' Range Rover, the Evoque. The new Evoque — launching in 2011 — will be manufactured at Land Rover's plant in Halewood, Liverpool, creating 1,500 new jobs in the process.

Just as Range Rover at the Geneva Motor Show were taking the wraps off of their most expensive model ever, the Ł130,000 Ultimate Edition, I was handing back the 2011 model year Ł83,145 Autobiography 4.4-litre V8 diesel model with the new 8-speed automatic transmission.

Being a Range Rover, even a luxurious top-end version, doesn't mean this model has gone soft in its off-road capabilities — only the Jeep Wrangler and the Land Rover Discovery come close to the matching it when the going gets really tough. But where the elitist Range Rover scores most highly is with its limousine on-road ride and comfort qualities and, of course, its premium brand ownership value.

The TDV8 4.4-litre engine (with parallel sequential turbocharging) replaces the TDV8 3.6-litre and is unique to the Range Rover. The all-new TDV8 combines superior power and massive torque with unparalleled levels of refinement. Despite the extra performance, this V8 engine is cleaner too, delivering better fuel consumption and lower CO2 emissions than its predecessor.

The combined cycle fuel consumption of the new TDV8 4.4-litre is 30.1mpg, making this the first Range Rover ever to better 30mpg. My test car lived up to these official figures, returning 30.4mpg for a combination of driving conditions ranging from motorways to local trips over winding A and B roads as well as slow moving in-town driving.

This still means a VED First Year road tax bill of Ł750 which reduces to Ł425 for the second year onwards. Many of these vehicles are leased or used on a contract hire basis by company executives, and for them the Benefit-in-Kind tax burden is 35%.

The new diesel engine is helped by its marriage to a new, electronically-controlled ZF 8-speed automatic transmission. This combination is enough to take the Range Rover from zero to 62mph in 7.8 seconds while top speed increases from 125mph to 130mph.

Available only on 4.4-litre TDV8 models in either Vogue or Autobiography specification, this 'smart' transmission integrates with the diesel engine to deliver the most efficient operating regime in all conditions. It is tuned to take advantage of the V8's low-end torque with torque converter lock-up being selected as early as possible to reduce slip and energy loss. The wider ratio spread, tall overdriven top gear and the fact that no more than two internal clutches are open at any one time all contribute to improved fuel economy and emissions.

Transmission Idle Control disengages 70 per cent of the drive when the vehicle is stationary and the engine is idling in Drive, significantly reducing consumption in the urban cycle. In cold conditions, the transmission selects a lower gear to promote fast warm up and get the engine up to its efficient operating temperature as soon as possible.

Naturally the Range Rover retains its usual permanent four-wheel drive with high and low ratio transfer box, hill descent control, traction control and dynamic stability control. My test model had the extra-cost active rear locking differential which adds a further Ł750 to the price. To reflect the performance of the new 4.4-litre TDV8, diesel models are fitted with the same Brembo-based braking system as already fitted to the 5.0-litre V8 supercharged model.

Revised driving controls include steering wheel-mounted paddle-shift as standard; the CommandShift lever is replaced by a rotary knob for selecting park, reverse, neutral, drive or sport modes — the last of these optimising the gearbox response times for maximum acceleration, improved response and sharper upshifts. The selector knob is flush with the centre console when the ignition is switched off, only rising up when it is switched on. All other traction related controls are logically selected via a series of push-buttons and turn controls illustrated with pictograms.

For the record, for 2011 the Range Rover also retains the 5.0-litre V8 supercharged petrol engine option but married to the ZF 6-speed automatic transmission introduced in 2010. Developing 510bhp and 461lb ft of torque, the Ł85,695 Supercharged V8 Range Rover sprints from zero to 62mph in 6.2 seconds and on to a top speed of 140mph, and remains the flagship model.

Inside, the five-door Range Rover Autobiography is sumptuous with real limousine class and beautifully crafted with acres of leather for the fascia panel, centre console, doors and seats. The seating for four, possibly five at a push, is equally luxurious with the four main seating positions featuring both heating and cooling. They also have power adjustment and the occupants are further pampered by individual heating and ventilation controls and outlets. Being high off the ground, access can be an obstacle for some and the rear side door frames are quite narrow, so for rear passenger access the limousine status does not apply.

Subtle concealed lighting around the car's interior gives further designer appeal and it is really a glorious place to be, and a wonderful way to travel. DVD, TV, superb sound, navigation and communication systems and camera vision assist just 'gild the lily' further.

The secret to the modern Range Rover's desirability is that it combines the best of both worlds: more or less unbeatable off-road but with fantastic on-road ride and refinement. It's a large vehicle — 4.9 metres in length and weighing 2,810kg — so finding a parking space in-town is not easy unless, of course, you have your own executive parking place.

In the country — naturally! — you have your own estate so that's not an issue. Despite its size the Range Rover is easy to drive and it scores very highly for in-town driving because of the elevated seating position which makes it easy to easily see all around the car. Given its size, other road users generally give it a wide berth as well. On motorways the same high viewpoint guarantees really good advance warning of issues further along the road.

On winding country roads the ride comfort is astonishing and the air suspension simply shrugs off the potholes. There is some body roll because of its higher centre of gravity but the all-wheel drive gives good grip in all conditions and the steering is precise.

High engine power and, even more importantly, huge torque also make driving effortless and the 30.4mpg average fuel consumption for this level of performance in this size of vehicle is outstanding.

Niggles? The fact that it's very large and very expensive no doubt adds rather than detracts to its appeal. However, as already noted, rear seat legroom is limited and there's restricted access through the rear passenger doors.

That said, there are no doubts at all about it being the most versatile, most capable and luxurious SUV in the world — until, that is, the new Ł130k Ultimate Edition arrives! — and with a fantastic on road ride, comfort and refinement along with huge off-road capability, there really is no other vehicle that can touch it.

Life begins at forty, so they say, and the Range Rover, in its forty-first year and third generation, doesn't seem to be heading for a mid-life crisis — unless all our oil supplies run out, the financial and business communities go bust, royals abdicate and 'celebrities' get real. — David Miles