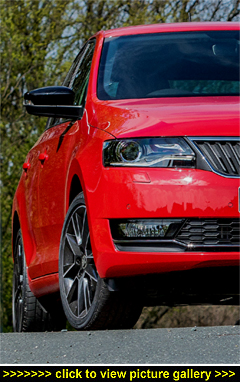 “The latest family-friendly Rapid
Spaceback range is now available
with a pokey and economical
turboed 1.0-litre three-pot petrol
engine under the bonnet...”

THIS ENGINE OPTION makes the perfect cornerstone for the Spaceback, whose compact exterior dimensions (4.3 metres long) and comparatively spacious interior have already made it extremely popular with families.

It's also an ideal vehicle for drivers who don't want to spend a fortune but need to carry four passengers or a lot of stuff and, like most everyone else, aren't happy when they're out unless they're connected.

The 1.0-litre TSI petrol engine comes in two power grades — 93bhp and 108bhp (110PS) — and in its stronger guise it's a peachy performer. Not only does it make a characterful sound while hitting 0-62mph in a purposeful 9.8 seconds but, officially, can squeeze 61.4 miles out of a single gallon of unleaded.

And there's plenty more to like, starting with the looks which are sharp but nicely understated — and which promise to retain their appeal for some years to come. Size-wise the Sportback five-door hatch sits midway between Skoda's supermini, the Fabia, and the brand's larger Octavia hatch, and is similarly sized to a Golf or Focus.

Fronted by a sloping chrome-framed black grille bordered by clean-cut headlights underscored by daytime running lights and topped by a clam-shell-style bonnet, the lines run back along sculpted doors and flat-cut wheelarches wrapped around black ten-spoke 17-inch alloy wheels wearing 40-profile Bridgestones, continuing on to the smoothly finished tailgate with a short overhang.

There are other powerplants (88bhp 1.4 and 114bhp 1.6, both TDI diesels) but the turbocharged 1.0-litre petrol-drinker is the one to choose, especially in its gutsier 108bhp showing. There's no DSG auto option but the standard-spec six-speed manual gearbox will quickly stop you fretting about that.

It's a real livewire, this three-pot, spinning up smoothly and pulling eagerly from not much above tickover; and it doesn't stop for breath all the way up to the redline. Meaning you'll rarely get stuck in a conga because there's plenty of zip for safe overtakes.

Like many three-cylinder engines, this turboed 1.0-litre puts out a charismatic signature 'thrum' when you work it hard although most of the time, and particularly when you're cruising, it's very quiet. Talking of which, the gear-change action is light and slick and the bite from the clutch nicely fettled, so you won't be missing an autobox, not even in commuter traffic.

999cc might fool some people into underrating its performance ability but this Skoda 'triple' is quick off the mark, serving up the benchmark 0-62mph dash in a very respectable 9.8 seconds. Flat out it will run to a legal-limit topping 123mph — an indication that it would (but not here, honest Guv) is that even in sixth on motorways, in-gear pick-up is clean and determined.

The gearbox's six ratios are, as you'd expect in a family-oriented hatchback, stacked to benefit economy; and it shows at the pumps — officially 61.4mpg is the figure but real-world drivers can expect to see better than the 49.3mpg MotorBar's roadtest team managed — and remember, they absolutely weren't trying to drive economically! More good news: along with a fuel consumption that is among the best in class, the three-pot is clean-running, with a palatable 106g/km of CO2 emissions.

Handling is something the Spaceback just gets on with, taking you along in a stress-free, predictable manner; flick it through some bends and you'll find that body control is equally well managed and there's more than enough grip to go round.

Decent bump absorption means broken blacktop doesn't do much to upset it — or you. The power steering delivers decent turn-in, assistance levels and self-centring that help the Sportback cruise motorways with ease, where it feels reassuringly well planted even on gusty, rain-soaked days. And you won't find anything to complain about when it comes to the brakes.

The cabin is refreshingly uncluttered with a smart dash (with classy hi-gloss inserts) and a logical place for everything. The de-rigueur infotainment system is fronted by a 6.5-inch touchscreen inset in the top of the centre stack — an Amundsen system that's also home to the SatNav with 3D mapping and postcode input. Other standard-fit entertainment items include Bluetooth, an SD card slot, USB port and Aux-in socket, and six speakers. The optional (Ł150) SmartLink+ feature adds complete online connectivity including live traffic reports and smartphone linkage via Apple CarPlay, Android Auto, and MirrorLink.

Physical comfort comes in the shape of some very inviting sporty front seats upholstered in a quilted fabric that feels as good as it looks. You won't need any lumbar adjustment because the amount that's built-in is just fine; as confirmed by one of our testers who suffers from a bad back (a nod from Maggie is always a good barometer of seat comfort and support). And the bolstering provides effective sideways location so you won't be hanging onto the wheel in the twisties either.

A fistful of headroom and decent legroom ensure no body parts will be rubbed or banged, even if you up the pace; not your shoulders, and not even an elbow with that of your front passenger. The sporty, all-black, three-spoke, multifunction (driver's computer plus voice for the radio, navigation, phone and media) steering wheel is satisfying to hold and use, and placing the Spaceback is easy-peasy thanks to clear forward and to-the-side visibility.

Adding considerably to the ambiance is a panoramic glass roof that guarantees a light and airy cabin even on the gloomiest of winter days. For Indian summers, individual blinds allow sun-worshippers to indulge while those who prefer to stay in the shade can.

Drivers will be glad of the clear white-on- black dials and the multi-function driver's trip computer set between them which shows, among other things, that crucial digital road speed readout.

Skoda are renowned for their 'really useful stuff' — and the Spaceback has its fair share with an umbrella that's stored under the passenger seat, a windscreen clip for displaying your parking ticket, a convenient and easily-emptied portable rubbish bin that fits into either door pocket, and an ice scraper that travels behind the fuel filler flap (where it's accessible even if it's cold enough to freeze the door locks!).

The Spaceback's level roofline doesn't penalise those travelling in the rear cabin, who enjoy generous headroom; plus there's loads of knee and leg room even if the driver and front passenger are six-footers.

Relaxing backrest angles and well-padded seating with outer armrests make it a pleasant place to stretch out and spend time especially as the glass roof panel, that runs all the way back to the rear headrests, makes it feel as though you're riding in an open car. Plus the new longer side windows boost street-level views. Bottle-holding door bins, magazine pouches, cupholders, and grab handles all make the rear cabin that extra bit passenger friendly.

The Spaceback's 415-litre boot is plenty big enough for most owners' luggage and daily carrying needs and yes, of course there are bag hooks for that weekly shop at Sainsbug's; a convenient lift-up parcel shelf prevents prying eyes seeing what's in the boot, which offers an optional two-level floor — set at its lower level there's a short drop over but in its upper position the floor is level with the loading sill and the mid-thigh loadbay floor level facilitates easy loading.

If you need more cargo space then fold the 60:40-split rear seatbacks to free up the full 1,381 litres, and even though the seats don't fold totally flat it's all easily accessible through the wide boot opening. And despite its small engine capacity, towing is not off the menu — the 108bhp Spaceback will pull a braked 1,100kg.

With a five-star EuroNCAP safety rating the Spaceback should put your mind at ease when driving on today's crowded roads; as too should its six airbags (front, side and curtain) as well as the height-adjustable front belts and Isofix child seat mounting points on the outer back seats.

You don't have to head up a young family to be attracted to the Spaceback — anybody who needs an economical to run hatch with versatile extra space for cargo that looks good and can be had at a keen price with an entertaining engine under the bonnet should be making their way to their nearest Skoda showroom. Rapidly! ~ MotorBar