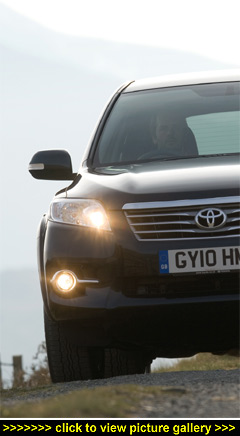 “Even before the worst winter
weather on record for December
had arrived, sales of SUV and
4x4 vehicles were up. And one
in particular, Toyota’s RAV4,
was making light of the snowy
conditions...”

UK SALES OF SUVs AND 4X4s have shown a significant increase in 2010 as the buying public return to the 4x4 fold. Audi, BMW and Land Rover have all reported increased sales for their 4x4s with long waiting lists well into 2011.

The introduction of new generation, lightweight models with more fuel efficient engines has been the spark that has reignited interest and probably the foresight by customers that we might just get another bad winter and, as it turned out yet again, the inability of local authorities to keep our roads open and safe.

With 'global warming' now seeming to be just so much hot air and the anti-4x4 lobby hibernating, freedom of choice appeared to be alive and well. Only the economic climate might freeze 4x4 sales this New Year as VAT increases along with the price of fuel.

For me, Father Christmas arrived in the form of the delivery driver who braved the snow-covered roads to get to my home on the Cotswolds a few days before 25 December to deliver, for a seasonal test drive, the very latest Toyota 4x4 — the five-door, five-seater RAV4.

This new version, with its low-ish CO2 emission level of 154g/km and XT-R trim and equipment levels, has joined the range in response to the growth in demand for 'crossover' type vehicles; cars that look like SUVs but with the low running costs of a family-sized hatchback. This version carries the starting price for the revised range along with an annual road tax bill of Ł155. Company car drivers will pay 23% BIK tax.

RAV4 models with all-wheel drive use the same 2.2-litre diesel engine and incur the same road tax and BIK costs as the new two-wheel drive version. For petrol lovers there's a 2.0-litre, 156bhp, Valvematic unit with Toyota's Multidrive S CVT auto transmission, all-wheel drive and XT-R trim. The price is Ł24,530 and road tax is Ł300 in the first year.

Top of the revised line-up are XT-R and SR specification, all-wheel drive versions using the 2.2-litre D-4D turbodiesel unit but with a D-CAT four-way catalyst system to reduce NOx and particulate emissions. They both use a six-speed automatic gearbox as standard. These models cost Ł26,550 and Ł28,320 respectively. Both will incur a hefty Ł425 first year road tax and Ł235 per year thereafter.

The latest RAV4 models gain a strong and distinctive new front-end design featuring a fresh and wider grille with horizontal blades and chrome accents, framed by new-look headlights and signature styling features of the latest Toyota models such as Avensis and Verso. The headlights, which incorporate projector-type low-beam lamps, are integrated into the new bonnet and front wing design which emphasises the RAV4's wide track and refreshingly sporty appearance.

There's also a new, full-width, aerodynamically-styled front bumper which accentuates the vehicle's stance. The addition of chrome accents to the grille, bonnet moulding and fog lamp surrounds reinforces the premium quality of this new design.

The interior is also upgraded to a higher level, with an extra touch of luxury for XT-R all-wheel drive models in the shape of a new leather and Alcantara upholstery combination as standard, together with heated front seats. In addition, both AWD and 2WD versions ride on new-design 17-inch alloy wheels.

My test drive RAV4 model, the SR version, is offered exclusively with the 2.2 D-4D D-CAT engine and six-speed automatic transmission and in addition to the features listed for the XT-R, also comes with 18-inch dark-finish alloys, smoke-finish headlamps, a reversing camera and a Start button.

The 2.2-litre D-CAT turbodiesel four-cylinder engine (used also in the Toyota Avensis range) produces 148bhp and 251lb ft of torque, on tap between 2,000 and 2,800rpm. That's sufficient to tow 1,800kg braked as well as provide a strong balance of performance and responsiveness combined with 39.8mpg in the combined cycle with the SR spec's standard six-speed auto 'box.

In real life during the very cold weather and snow-covered roads at Christmas, and the milder spell over the New Year holiday, my test car returned 31.8mpg. That was for all types of driving, from locked 4x4 mode in snow and ice to motorway journeys to stop-start family shopping trips as well as static early morning de-icing periods. Once the weather warms up, that figure should improve to more like the official one.

Excuse me now for getting 'technical', but the whole point of a useful 4x4 is its drivetrain. Core technology, and the most praiseworthy, is the RAV4's all-wheel drive system whether used with the manual or auto transmissions. My model had the six-speed auto gearbox and many SUV customers will choose this set-up.

It's easier to use in good or bad weather and with less wear and tear in the drivetrain off-roading or when towing. In standard Auto mode the changes are fast and smooth and there's a selectable Sport mode for a more aggressive shift pattern using AI-SHIFT Control (or Artificial Intelligence-Shift).

The driver can also opt for sequential manual shifts. Slotting the selector lever into M mode allows gears to be changed using the shift lever or paddle-shifts on the steering wheel. This new six-speed Sports Direct Shift gives a more direct feel and provides a lock-up function on second to sixth gears to provide as wide a gear ratio range as possible. The result is a sporty drive like that of a manual system.

Sports Direct Shift also adds more driving fun with its 'blipping' feature: this is achieved by controlling the injected volume of diesel and hydraulically controlling the clutch, and contributes to extremely fast downshift times.

Also included in the drivetrain is the Integrated Active Drive System. This takes a series of separate vehicle technologies and, using high-speed data communications, combines them into a single package.

The Active Torque Control system continuously monitors and controls the transfer of torque between the front and rear wheels, and is standard on all RAV4 models.

Instead of a conventional centre differential, electronic sensors are used to monitor information from the throttle angle, engine torque and speed, gear ratio, vehicle speed and steering angle. This allows RAV4 to switch between front- and four-wheel drive modes to ensure stability in all driving conditions and reduce fuel consumption.

When moving off from standstill, the vehicle requires maximum traction and acceleration so the system automatically and seamlessly distributes the torque to both front and rear wheels in a front:rear ratio up to 55:45.

In normal driving conditions, the system can switch from four- to front-wheel drive to help fuel economy. The distribution can then vary between 100:0 (front wheels only) and 55:45 front-to-rear to meet different driving demands.

In addition to the Active Torque Control, the driver can lock the torque distribution to 55:45 using the AWD lock button on the dash. This can help free the vehicle should an individual wheel lose grip in off-road conditions. Once vehicle speed exceeds 25mph, the system is automatically switched off. This function was of real-life use during my driving over snow and ice covered roads and a vital part of the RAV4's very sophisticated all-wheel drive system.

While the RAV4's system might lack the low ratio drive found on heavyweight 4x4s or the medium-sized Suzuki Grand Vitara (which I also rate highly), RAV4 models fitted with automatic transmission have a function called Downhill Assist Control to help out — and it's available simply by pushing a button.

During a steep descent, the engine braking force alone might not be sufficient to reduce speed. Downhill Assist automatically applies appropriate hydraulic pressure to the brakes to maintain a constant low speed without locking the wheels. This increases control when descending slopes off-road.

Most vehicles' various stability control elements, such as ABS braking, traction control and power steering, work independently of each other. Toyota's VSC+ system, however, integrates these functions and then works with the Active Torque Control to control not only the speed of individual wheels but also to add steering torque assistance to help the driver correct a skid. It anticipates a skid, understeer or oversteer and assists the driver by making the correct steering action easier and the incorrect action more difficult. 'Nannying' and intrusive it is not; helpful it most certainly is.

With hordes of new crossovers coming onto the market, but mainly only with two-wheel drive traction, and a few new-generation SUV 4x4s which are designed only for occasional tough going, the latest RAV4 can easily be overlooked or dismissed by the unwise.

So take a closer look at the RAV4's abilities; it could be the wisest thing you ever did. It certainly made me feel like a wise man at Christmas because I was moving on the roads when others were not.

So what's not to like? The price, actually — it seems that even medium-sized 4x4s are getting expensive to buy. The RAV4's also expensive to tax, has a firm ride and does not have the brand desirability of the Land Rover Freelander.

On the sunny side, the RAV4 offers smart looks, is well equipped, its all-wheel drive system is first class and easy to use (and made easy work of the snowy and icy conditions) and has a nice to use auto 'box. It's also tough and selling well. — David Miles